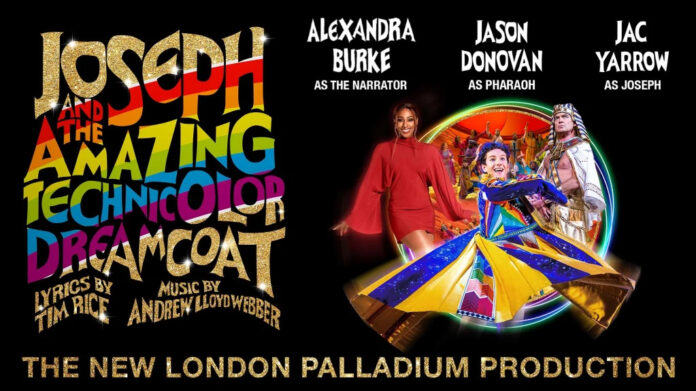 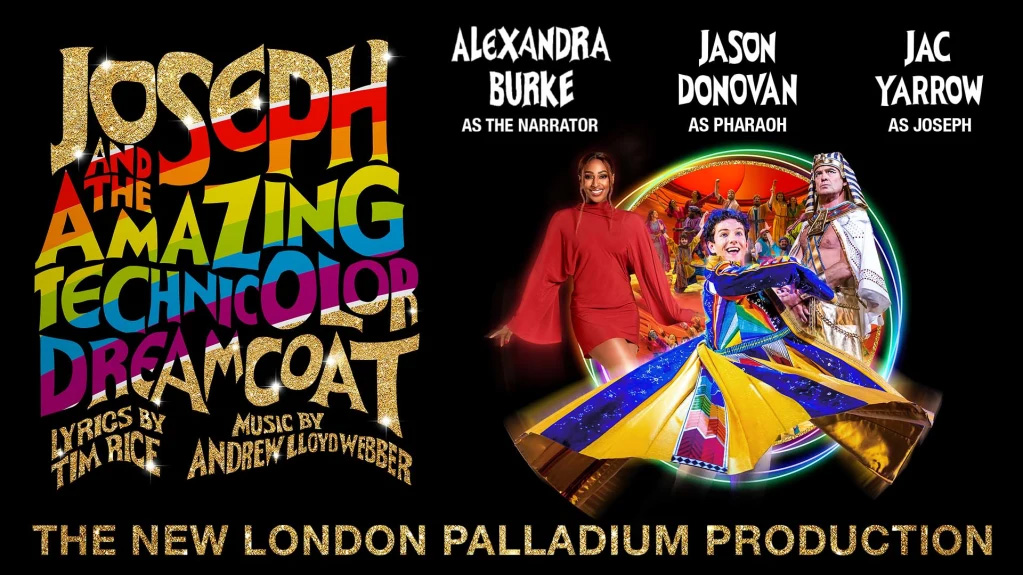 Joseph And The Amazing Technicolour Dreamcoat returns to the stage with Alexandra Burke as the Narrator, Jason Donovan as the rock ‘n’ roll Pharoah and Jac Yarrow as the infamous Joseph. The new production gives the classic tale a modern and updated breath of fresh air, whilst paying tasteful homage to JATD of old.

Walking through the venue the first thing I notice is a sea of bright faces. Faces of young, faces of old, faces of pure excitement and joy. Countless members of the audience are dressed in fantastical jazzy outfits; which suit the kaleidoscopic world of JATD perfectly. In scarlets and blacks and ochres and peaches and rubies and olives and violets and fawns and lilacs and golds; their dazzling outfits really take the biscuit. Did you see what I did there? We take to our seats facing a gargantuan Joseph And The Amazing Technicolour Dreamcoat projection in true prismatic form. A blanket of subtly lit stars and constellations create a galactic and magical atmosphere around the stage.

The room bursts into life for the overture. It really is hard to believe that the music is live. Dramatic, intense, bounding brass layered with keyboards, guitars and crashing drums, it blows me away. It is no surprise that the sound designer for the production Gareth Owen is in possession of the Laurence Olivier Royal Albert Hall Award for best sound design. Guitarist Ryan Haberfield rips into some seriously tasteful riffs and solos throughout, more attuned to the playing of Slash or Hendrix. We travel from French folk music of Those Cannan Days to hoe-down inducing Southern American country. In conjunction with this, the actors themselves change up their accents to suit. 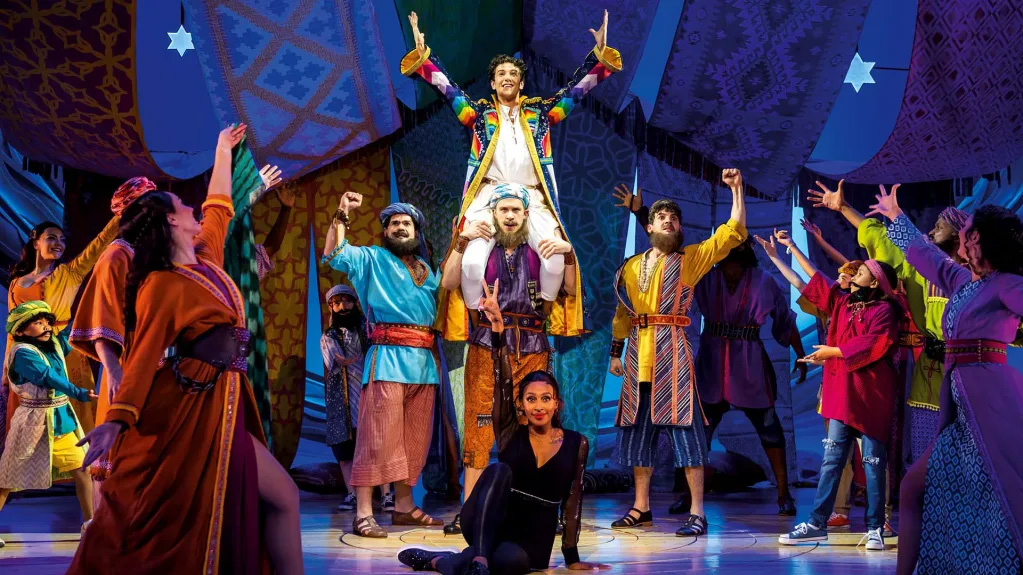 The prologue introduces us to the dazzling and, quite frankly, mind-blowing Alexandra Burke. She shows incredible acting, singing and danceability, all whilst being pregnant. This fact only deepens the admiration I have for Alexandra and what she is able to do. She shows range and natural humour with her farcical character switching, from Narrator to Joseph’s father Jacob. She shows the audience her range and composure, exuding natural humour and charisma throughout. Alexandra is a powerhouse of a vocalist and I’d like to see her star in Dreamgirls at some point. This woman needs to lead.

Numerous young actors join Alexandra on stage, who all act with confidence and humour. This new production of JATD sees the introduction of young actors within the play as major characters. Out of these, the one who played Poitphar does a priceless rendition. 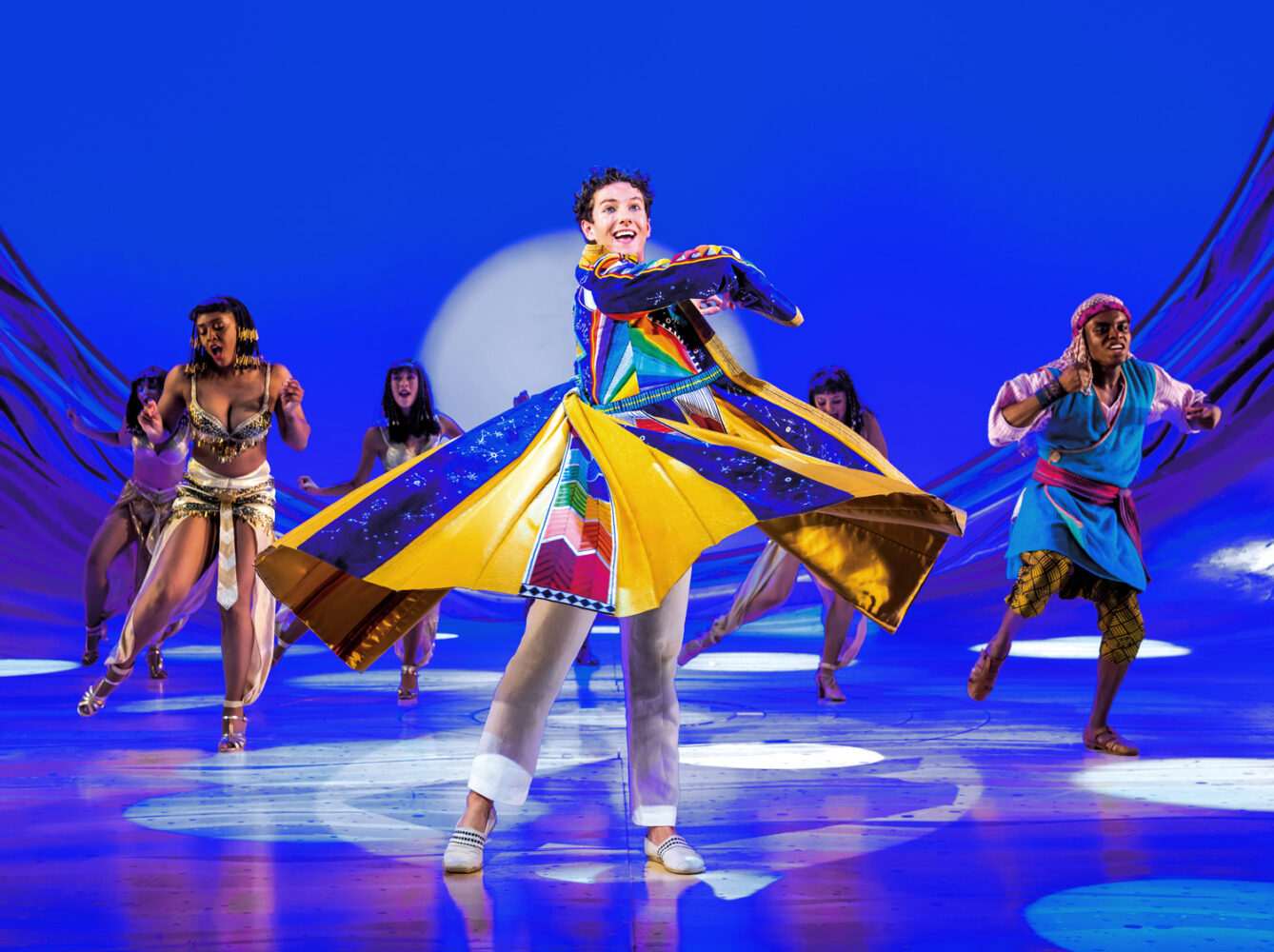 Written by the tremendous Andrew Lloyd Webber and Tim Rice, the play was made only for Colet Court School in London on 1st March 1968. JADT was just 15 minutes long at its first performance and grew to become the full production we see today. These young actors act as tributes to the roots of the production; and what a great job they do too. Said tributes are pertained to with adorable additions of animals in the play. From sheep on skateboards and camel bikes, it really makes you think of those primary school nativities. You know the ones, where the Star is picking her nose for the entirety and one of the Three Kings’ beards falls off. Unfortunately for me, I was the Star and the whole thing was recorded; providing my family with laughs at my expense for generations to come. It is clear that JATD evokes those memories of childlike wonder. You feel as though you are young again watching your first play, bewildered with your friends wide-eyed in awe.

Visually, JADT leaves no room for criticism. Blindingly beautiful backdrops set the scene perfectly and transition seamlessly. A stunningly dazzling orange sun changes throughout and the front lighting follows suit. Washes of brilliant orange and moody blues convey day and night perfectly, joined by seamless prop changing. Unsurprisingly, lighting designer Ben Cracknel was nominated for the 2020 Whatsonstage award for Best Lighting for his work on JATD. How he didn’t win is beyond me.

The stage comes to life for the smash hit Any Dream Will Do, arguably the most popular song from the production. The audience hilariously cannot help themselves and join in with the famously cheesy “Ahh’s” sung by the young actors. The choreography is both zestful and intricate; creating a powerful burst of energy when in unison. Throughout, the choreography boasts a range of styles and movements. From can-can dancing to hip-hop to ballet, these guys know how to move. Powerful, endearing and animated, the dancing matches perfectly with the mood of the songs. Activity is happening on multiple levels and in multiple corners. The stage has a depth that helps tackle the stage ever feeling overcrowded.

Jac Yarrow receives a heartwarming welcome to the stage, as the infamous Joseph. From Any Dream Will Do’s joyful exuberance to Close Every Door’s haunting melody and dark power, Yarrow proves he is the man for the job. Showing immense vocal dynamic and strong portrayals of emotion, he has the audience in his hands from the get-go.

As well as wanting Josephs Technicolour Dreamcoat for myself, I find myself wanting pretty much every piece on stage. The costume design by Morgan Large is eye-wateringly brilliant. The exaggerated versions of Egyptian/Middle Eastern dress are given the technicolour treatment. Being conscious of cultural appropriation is important. We’ve seen time and time again many art forms being re-hashed to suit this consciousness and rightly so. But, I find it refreshing to see a play that still holds onto what it is without overthinking; pure ludicrous fun. Should we no longer find humour in playing with stereotypes? The Englishmen with bad teeth and top hats to the smoking beret-wearing French in striped jumpers. It’s everywhere. It is our responsibility to ensure the line isn’t crossed and here, I don’t think it is.

From the dazzling gold Pharoah to the beautifully elegant wives’ dresses, we watch in amazement at the splashes of colour and movement such pieces possess. This seems a celebration of culture, not an attack on it. JATD is far too outlandish to try and draw comparisons to real life and needs to be left untouched if it is ever going to maintain its charm and individuality. 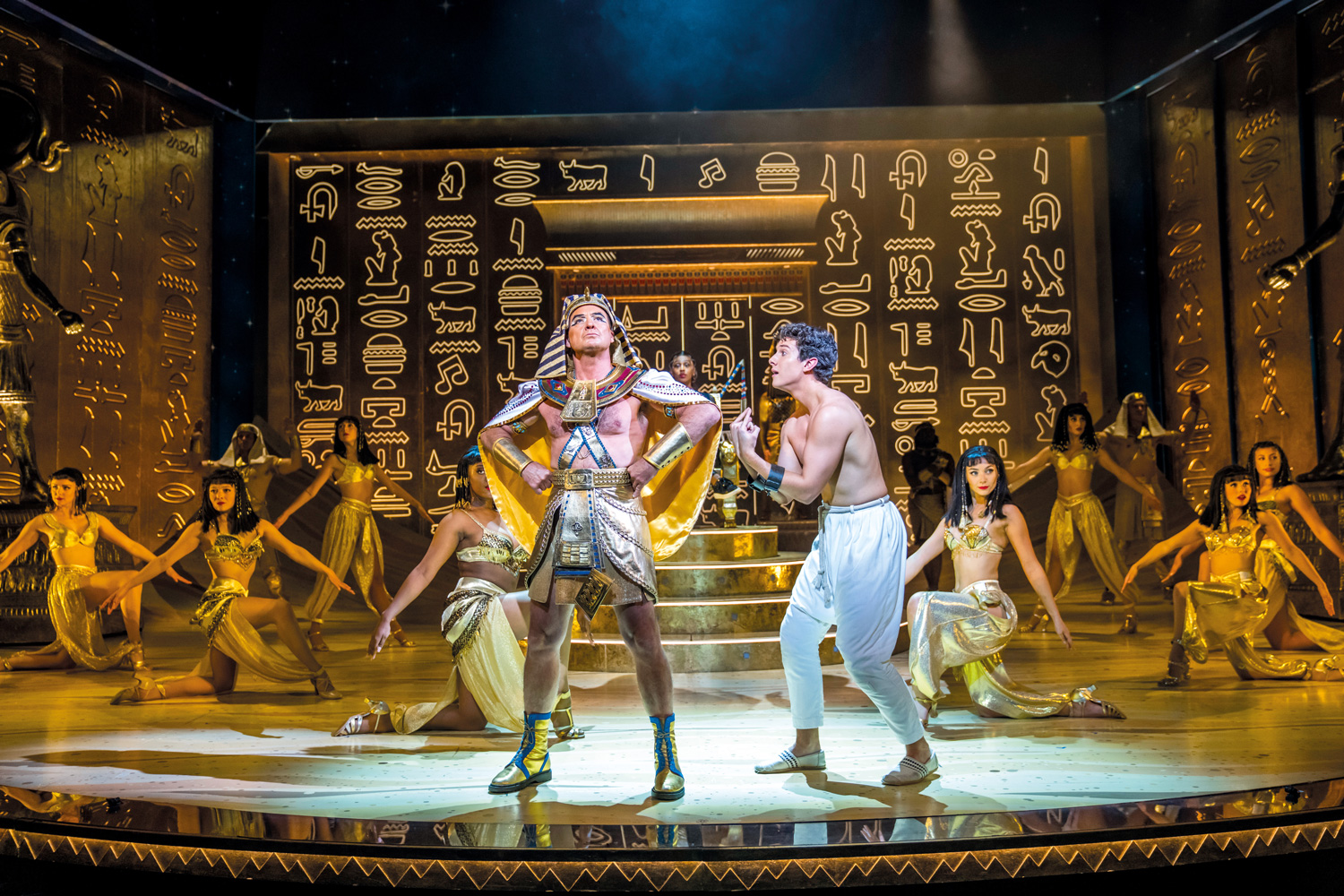 The Pharoah, played by the beloved Jason Donovan, receives roaring applause. His portrayal of the Elvis-inspired King is hilarious and the performance of Song Of The King brings through a completely new stage set-up. The Gods Horus and Anubis themselves come for a singalong and show us their guitar playing ability. I’ll leave that to your interpretation. There really is something for everyone to admire in this production, be it the visuals, the audio or everything combined. You are guaranteed to hold a smile throughout.

If you are one of those who saw the straight to VHS 1999 film and didn’t enjoy it, don’t let that stop you from seeing the stage show. I was one of those people and can confirm it is a completely different (and beautiful) monster. No shade to Donny Osmond and Maria Friedman of course, they were amazing. But the story is just something more personal, magical and understandable in the stage show. It’s a story of perseverance, humanity, tolerance and dreaming; making the most out of your situation and fighting to improve it using bravery and strength.

Joseph And The Amazing Technicolour Dreamcoat stands alone in its obscurity with a huge Technicoloured smile. It will leave you energised, refreshed and singing Go Go Joseph for days. It’s a Technicoloured curse.

Tickets for Joseph And The Amazing Technicolour Dreamcoat as well as other performances in the stunning Manchester Opera House can be found here:

All words by Lucy Shevchuk. You can find more of her work in her authors profile here