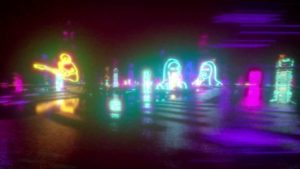 Ahead of the release of their new album ‘Sacred Dreams’ (Rocket Recordings) Josefin Öhrn + The Liberation have unveiled the video to their new single ‘Feel The Sun’.

‘Feel The Sun’ uses revolutionary software in a way not yet seen in a music video, with state-of-the-art manipulation of 3D design and an extra layer of hand-drawn illustration all created with its unique relationship to the song it is accompanying being at the forefront of the bands mind.

Because of this inseparable and unique connection between song and video, as the album version evolved and developed over the course of production, the single remains the same, creating two slightly different takes on the original recording. In order to create the effect they did, visionary director Tom Carpenter worked within a team of four designers over the course of a month. Tom says of the process “where the video differs to most projects of this ilk is that motion graphics studio Grizzle were given access to every nut and bolt of the recording; every vocal track, drum beat, guitar & synth sound. The amplitude data is analysed and extracted and drives everything you see”.

‘Feel The Sun’ sets us up perfectly for the album, ‘Sacred Dreams’, that is to be released at the end of this month via Rocket Recordings and is a great example of how the band are exploring new sounds and techniques.