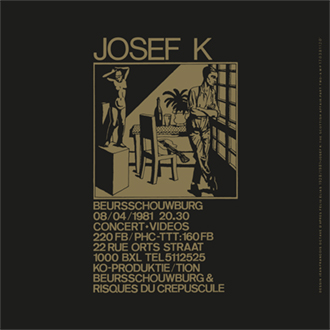 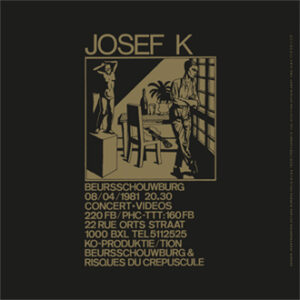 Live album taken from an April 1981 gig at the Beursschouwburg centre in Belgium which was played by Josef K during the run up to recording their sole album The Only Fun In Town. This is available in a limited edition of 1000 vinyl copies with extras including flyers, archive band photographs and a sleeve note featuring quotes from Paul Haig and Malcolm Ross among others…….Ian Canty hears the only fun in Brussels for one night only…..

Brussels was clearly an important place in the world of Josef K. The Edinburgh band previously known as TV Art played a New Years Eve event with Orange Juice in 1980 and returned early the next year for two shows after four gigs over the border in the Netherlands. The Beursschouwburg Arts Centre show is from where this new live album is taken. Josef K also taped their only LP in Brussels too, but as with the previous aborted effort Sorry For Laughing the band didn’t favour the finished product. I’ve always liked it: that LP is fast, spiky and mysterious. By this time the band had settled on their classic line up, leader Paul Haig on vocals and guitar with Malcolm Ross also toting a six string, plus drummer Ronnie Torrance and David Wendell on bass (who had replaced an Exploited-bound Gary McCormack).

In the sleeve note Malcolm Ross observes that the band were in pretty hot form live at the time, their craft honed by the run of Dutch shows. Here they blast through ten songs in around thirty minutes, as though they were battling against the clock. Which in a sense, bearing in mind Josef K split not that long after amid the general dissatisfaction with The Only Fun In Town album, they were. They’re a ball of pent-up tension here, full of fire and energy to burn. They were clearly not for mucking about at all on 4th April 1981.

The tense, trebly attack of the band is right there at the get-go – racing drums drive the guitar scrawl forward on Fun ‘N’ Frenzy, with Haig spitting out words through an echo effect with an almost psychotic nonchalance. 16 Years follows with a bouncing bass line before a super-languid and cool take of It’s Kinda Funny, a rickety guitar jangle counterpoint to the detached vocal. Crazy To Exist belts past at a right old pace, but then Forever Drone injects a little discordinate punk funk into the proceedings. The quick attack of Revelations (“So many times exposed”) gives way to the more mid-paced Citizens, but this one has a fine bit of guitar interplay that even Television would have been proud of.

Not there aren’t moments of perfect pop heaven. Chance Meeting and Sorry For Laughing follow in quick succession towards the end of The Scottish Affair and you would be hard pressed to find a pair of more attractive guitar-based songs. They’re done justice on these live versions, they are both endearingly sensitive and delicate where they need to be. Final Request brings things to a close with Haig near-screaming like a baby Howard Devoto and the band concocting a fine and fiery cacophony. The only things really against this set are the barely audible audience response and the slightly dodgy fidelity at the start of Fun ‘N’ Frenzy (though that soon clears up nicely).

The Scottish Affair (Part Two) is a release that Josef K fans will surely want to snap up, given their limited output and the good quality of the recording. The added memorabilia is also an important part of this release, but the main impression I got from this LP is that Josef K cut a mean and addictive live proposition, louche practitioners of fearsomely fast cool. Something we will not see the like of again, so this record is the next best thing. The only question remaining is what was The Scottish Affair (Part One)?