Home Blogs Jordan RIP – a tribute to the punk icon 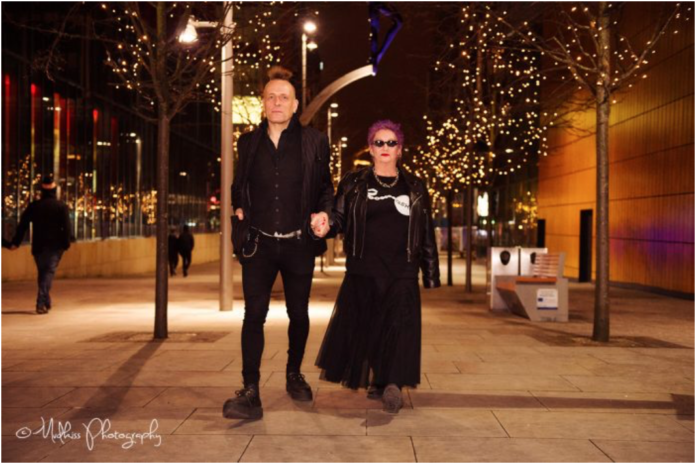 John Robb eulogy to the late Jordan – friend of Louder Than War and punk icon.

More important than any of the cultural baggage was the fact that she was golden-hearted, wonderful wise woman who touched everyone who met her and left them glowing with her generosity, wisdom and cackling laugh. She was super smart, hilarious, a fan who was immersed in pop culture and most important of all had that heart of gold and her guttural laugh and mischievous Carry On sense of humour and demeanour will make me glow till the day I die.

With her irrepressible style, her glowing energy, her wild sense of humour and her precious presence we are going to miss her.

Jordan was the true original. It was an honour to have got to know her and to be a small part of her deserved lap of honour with the brilliant ‘Defying Gravity’ autobiography. The rip-roaring book she wrote with brilliant author Cathi Unsworth that is perhaps the closest you will get to understating punk rock. The wisdom, the laughs, the madness of being on the road with Jordan on the book tour with her daredevil attitude to art and life was, well, punk rock. (in conversation with Jordan about her love of ballet here)

A key part of British pop culture, she was punk rock and we were just satellites orbiting around her outrageous cool.  Yet despite being at the heart of the big city Kings Road scene she was perfectly small-town England where the real freaks and game-changers come from. The hip do this stuff off the shelf, the small-town people do it 24/7 – it’s crucial to understand this. She was the face of the Sex shop before it was called Sex. The day she waltzed into the shop when it was called Seditionaries dressed in a ballet outfit from hell was the moment that punk rock coalesced.

She was the first person to be punk in attitude, style and swagger. She invented it all and the music was just the soundtrack to her devilish may care style war.

She was dressed to kill – a walking work of art that confronted the stuffy hypocritical England of the mid-seventies. She was flamboyant and outrageous and yet classy and stylish. She could make the most helter-skelter combinations of clothes work. She defied convention, bras, common sense and the stuffy morals of the tutting classes. She rolled with the punches from her fellow passengers on the Seaford to London train when she went to work at SEX. She was the punk rock matron looking after and inspiring the skinny nervous boys like Sid, Marco, Adam and many others. She was the terrifying behind the counter shop boss who challenged people on what they bought and wore because she knew that punk rock should be a challenge and not a label.

Punk was unique in that it was a statement in pop culture was not just a series of seven-inch singles. It was also a style. A look. A sartorial statement. An haute couture mix and match, cut and paste with whatever you fancy shock to the system that could be high decibel records or high decibel style. If you think it was ‘just about the music’ then you really don’t get it.

She was inner core of the inner core and her restless spirit saw her turn an entranced customer who had been leaving her love letters, Stuart Goddard into Adam Ant inspiring the shy artful genius to transform into the ultimate chiselled art piece himself under her guidance and inspiration.

Despite her terrifying appearance Jordan was a fiercely intelligent independent woman with a generous soul. She was constantly funny, caring and sweet. I did events and in conversations a nodding Sid James prop to her great Barbara Windsor anecdotes and wisdom with her all over the UK and Europe and she was hilarious and smart.

The crowds that turned up were the old punks, male and female, the teenage pop culture students, the wild and the beautiful and the plain curious recognised her for being the number one who changed the world by defying it – a genuine shining light and a great British dandy who was that rarest of things – substance over style. There was no back up – no plan – no script – we just went and did it – freeform – free jazz –  that’s how she lived her life.

Those who met and who spoke to her glowed after they left – not because of her innate stardom but because she was genuine, down to earth funny and unaffected by an amazing life where she had hung out with Andy Warhol, David Bowie and the other people who used to come to stare at her in the SEX shop. Rightly she treated them as she treated anyone else. She was an icon without the ‘I’ and the ‘con’, she was far out and down to earth.

She was inspirational, thrilling, daring, defiant and switched on.  She would rave to me about Shellac or IDLES before hardly anyone knew who they were. She would always be heading off to a gig or a flower show or thrilled by a new idea or sound or texture or nuance. She would get on stage with my band, the Membranes, and recite words off the top of her head whilst we did a dub jam. Like many of us, she understood that punk rock, art and ideas were of the moment. She would improvise and never had a safety net in her performance or in her life.

She was beyond the bondage of life, she defied getting older and still cut a dash in the classic Westwood ‘Tits’ T-shirt, defiant spikes, bandana and big boots. She was a free spirit whose love of animals and cats was her core. Mainman Burmese. The cat breeder. Meow. Fnar fnar!

Fuck. Fuck – carved in your back with a razor blade sort of fuck.

Fuck, fuck, fuck we are going to miss her.