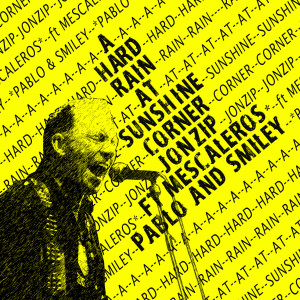 Jonzip previews forthcoming solo album with new EP A Hard Rain At Sunshine Corner. Pablo and Smiley from Strummer’s Mescaleros are on-board, too.

Not bad going for a guy who is, like many of us readers and writers alike, a huge fan of the legend that is Joe Strummer. Setting out to record an acoustic set during downtime in his regular band, The Zips, Jon found himself with a couple of illustrious band mates along for the ride. Two of Strummers backing group, namely Smiley Barnard and Pablo Cook from The Mescaleros are featured on this, his lead-in release to an album scheduled for release in February next year.

The Zips, if you don’t know the name, were (and are) one of Glasgow’s original punk bands. They released a couple of singles at the time then disappeared until 2006 when interest from abroad in their early material saw them record their debut album 30-odd years after they first formed.

Uniting with the charity Strummerville ten years after the great man’s untimely passing, they released the mighty Road To Strummerville single soon afterwards to critical acclaim. The song can be heard and downloaded here: cdbaby.com/cd/thezips12.

So, to matters current. Jonzip is back on the offensive with A Hard Rain At Sunshine Corner and it’s rather good. Four tracks long (and a hidden one for good measure), it sees the frontman’s typically barbed attack slightly (but only a smidgeon) mellowed with the acoustic treatment of the songs.

Left Of Your Rights is typical of the material; everyman lyrics and a zippy (sorry!) melody, framed by his quite delicious acoustic guitar and the two Mescalero boys on percussion and backing vocals. There’s a hint of The Clash; there always will be with Jonzip, and that’s no bad thing. Railing against the injustices and the misery in our midst, it’s still a hell of an uplifting piece of song-smithery.

Wrong Door Raid sees his Bo Diddley rhythm chopping along against his neat lyrical turns and it is a smart bit of writing in anyone’s book. 1919 (The Battle Of George Square) is another deceptively simple song detailing the Red Clydeside strikes when the government sent troops and tanks into Glasgow’s city centre, seen through the eyes of a young man not long returned from the trenches of the First World War.

As a taster for a forthcoming album,”Hard Rain” whets the appetite perfectly. Keep your eyes peeled for it.

As well as being on the link above (The Zips) The Zips can also be found on Facebook.

All words by Joe Whyte. More of Joe’s writing on Louder Than War can be found at his author’s archive.