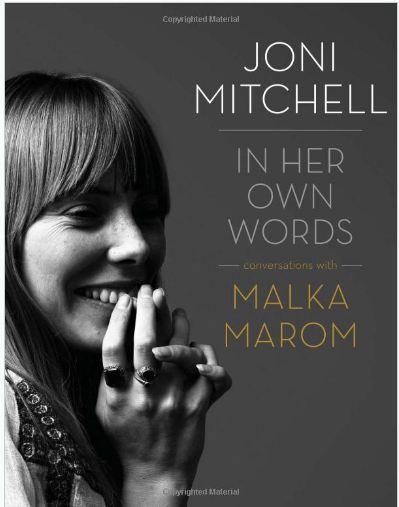 This book is perhaps closer to being some kind of retrospective art exhibition than a straightforward biography. Malka Marom’s in-depth conversations with Joni lead you through adjacent galleries lined with various (mainly) self-portraits of the artist but also some painted by her friends and contemporaries. You can stand and look at the paintings from both sides of the room – both ends of the stairs, both exits from the tunnel. The book clearly holds up a whole collection of mirrors to Joni Mitchell, and that is the lasting impression I get from the long talks she has with Malka   – that she is such a multi-dimensional talent that we can see her most clearly in a multi-faceted manner and even then, could we ever get to the essence of this most unusual and inspirational woman?

Back-track to 1966….Malka Marom, also a singer/musician, recalls the night she first encountered Joni. It was a destined rendezvous – the kind the Universe throws up once in a while, the kind that stops you in your tracks, where you’re following an unseen map, answering an unspoken call. Malka never went alone to clubs, she never normally deviated from her normal route but something pulled her into the Riverboat Coffee House that night and this is where Joni was tuning her guitar, getting ready to play a handful of songs that simply blew Malka away. It seems strange that not many people seemed to recognize the genius that stood on stage that night but the magic wasn’t lost on Malka and she predicted to Joni there and then that she would one day be “acclaimed the world over” – that she was as much a poet as Dylan or Cohen…..

Needless to say, Malka was correct and a bond was forged that fated night which remains intact today and this book is the fruit of that bond. Malka conducted three very long interviews with Joni over as many decades. These were recorded and are published here more or less verbatim which makes those paintings very detailed. These are no rough sketches. Each conversation adds more brush-strokes, more colour and definition so Joni Mitchell really comes alive. At times I feel I’m sat on the sofa with these two women, listening and wanting to join in their talks, so animated and fascinating the discussion is. There’s also much laughter between them, despite the often serious and heavy topics of discussion (depression, sexism, ecology and loneliness – along with much exploration of the creative process and the struggle to keep it pure).
Joni talks quite a bit about producers and other musicians trying to hijack or divert her direction and her having had to work very hard to stand her ground and stay true to her original impulses. There’s also an interesting passage where she is understandably miffed at David Crosby who apparently said that two days after Woodstock, Joni had “a song written from what we said”. Joni told him she didn’t get the song from what he (or anyone else) said “Already he’s tailgaiting on it” she tells Malka “Crosby had nothing to do with the writing of Woodstock”.

Joni is as much a painter as a musician, as much a poet as a singer and this fluidity is what jumps out of the pages. Her words are so evocative, her voice a sensitive instrument and her hands can paint all those things in vibrant striking colour as well as more subtle, thoughtful hues. I’m so pleased that Malka’s beautiful book contains several reproductions of Joni’s visual art as I was only dimly aware that she painted so stunningly and how vital that medium of expression is in understanding her. A good example of this is where she would ask Tom Scott who she worked with in 1974 to “put a little more yellow on there” in terms describing the musical sound they were searching for. Her palette was diverse and she frequently refers to music chromatically – but then the very term chromatic relates to colour and the musical key so perhaps this is completely natural. It’s worth mentioning that the book is also illustrated with Joni’s lyrics and I say illustrated because they are so pictorial and poetic. Her words conjure up images as easily as her paintbrush.

I’m aware that I read this book at a time when Joni is unfortunately recovering from a brain aneurysm  but thankfully reports that she is improving are coming through and one of the things demonstrated in these interviews is her resilience and ability to learn from mistakes or misfortunes. She’s a survivor and one of the most moving parts of the book is towards the beginning where she discusses her experience and recovery from polio with Malka.
Despite the fact this book is in three sections spaced years apart there is a real sense of continuity. Past and present are frequently interwoven throughout the text as Joni hops from decade to decade. She can link up something that happened yesterday with an episode from the sixties and remarkably she and Malka seem to need no time to warm up. They take up where they left off in the way only true friends can and that’s probably what makes this such a wonderful read. Only a friend is likely to ever catch such intimate conversations and nuances and these are scattered throughout the stories in precious one-liners and lengthier streams of consciousness. I read the book from beginning to end but you could dive into any page and strike gold. There’s more than two sides to every story and this charming dialogue will show you that providing a special insight into not just Joni Mitchell but the nature of art itself.

All words by Mary O’ Meara. More writing by Mary on Louder Than War can be found at her author’s archive