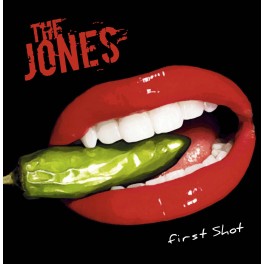 With a more than decent pedigree in providing backing for Chris Wilson of The Flamin’ Groovies (a band who were held in higher regard in France than anywhere else) in the last few years during his tour promoting the acclaimed “It’s Flamin’ Groovy”, The Jones have made their bones in their homeland of France and abroad. The band formed in 2010 and includes members of French nearly-were’s Bad Losers and Les Dogs. Having some down time, The Jones have released this 10-tracker, First Shot and for any fans of The Replacements, power-poppers The Knack, the 70’s Stones and The Pretty Things, it’s a fine collection of songs.  The single is also the title track and its horn-embellished glory is all guts, glory and gusto.

Describing themselves as “the antithesis of fashion victims”, they’re clearly in no thrall to the vagaries of modern music. With nods to vintage Brit-beat like Free and Bad Company, the psych of The Seeds et al as well as pub rockers Pink Fairies and The Feelgoods, The Jones have more in common with the classic eras of rock than any young pretenders. A cover of Sea Cruise (originally by Frankie Ford in 1959) retains the vigour of the original but has added sleaze, grease and good-time rockin’ to the innocence of the original. Weapons Of Mass Distraction is probably not one for the feminists amongst us; it’s (thankfully) a tongue-in-cheek trashy wig-out with some rather risque lyrics about a young lady’s accouterments and whilst it’s all done in fun, it doesn’t sit particularly well with the higher standard of song on the album.

This one notwithstanding, the other nine tracks are helluva good. It’s all done with an element of fun throughout the album and I doubt The Jones take themselves too seriously. I Want Your Lips takes the old familiar Bo Diddley beat and gives it a make-over; with swirling keys and truncated, urgent guitar it’s damnably potent and powerful. There’s A Crisis is more familiar territory for these guys; with lysergic organ swells, jangling guitar and a crisp rhythm section, it’s the most overtly garage thing on the album.  Looking For sees exquisite strings and acoustic guitar which give way to sonorous vocals and a proper Keef Richards-style solo over the end. Blue Jean Talk is the most obviously Groovies-inspired song; with a riff that could have fallen from the wax of the Nuggets series.