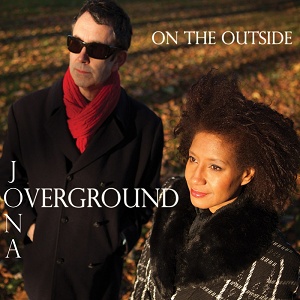 Jona Overground – On The Outside (IRL Records)
CD/DL
Out Now

If anyone were to compare modern day writers to greats such as Bacharach and David, or Goffen and King it would have to be completely and wholly justified. It is therefore with much deliberation that such a comparison is about to be made.

Jona Overground singularly known as just Jon and Anna write quite superb, classic sounding pop songs which have their roots firmly embedded in the 60s and 70s. Like the beautiful voices of Dionne Warwick, Dusty Springfield and Carole King, so Anna shows why her incredibly sought after backing voice, used by the likes of Kylie, Erasure and Lionel Richie, really needs to be given the spotlight in its own right.

You’ll be convinced that you’ve heard tracks like Let’s Pretend and If You Were Free somewhere before because they contain the magical qualities that the aforementioned writers have in abundance. Jon too is undoubtedly a talented guitarist and pianist (though his vocals on Time For Games are slightly flat) and the pair have a partnership which is well capable of writing some unforgettable songs.

Aside from the sublime timeless pop that they have the ability to seemingly create with little effort, they can also turn their hand to more dance/disco orientated tracks like My World Your World.

After individual successes (classically trained Jon has also written music for the BBC, Channel 4 and ESPN) the natural progression is to record as a duo such that their talents seem to ‘click’. Album closer Fallout is another track that breeds the air of familiarity that much of the album contains.

The only thing that Jona Overground really need is one of those lucky breaks and you’ll hear them all over the airwaves. They have a sound that will be adored by many and maybe, their songwriting skills will soon be in demand by many major artists too. Remember the name as it will almost definitely come into your life again.