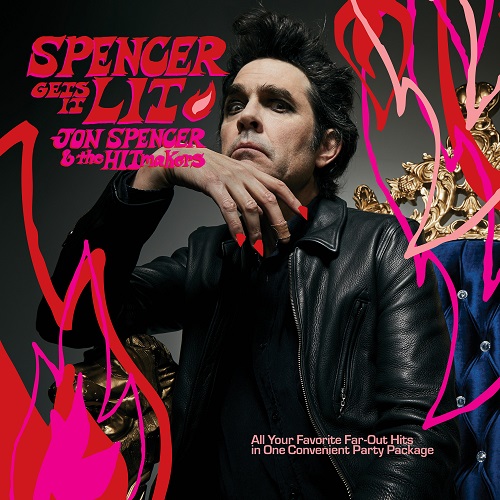 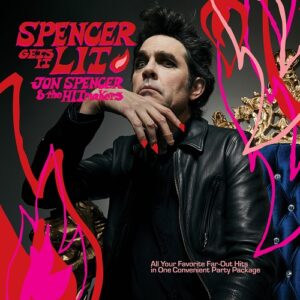 Jon Spencer & The Hitmakers: Spencer Gets It Lit

It starts with a descending drone, the quick plummet lasting but a couple of seconds before Jon Spencer & The Hitmakers are whipping up a modulated effects-laden typhoon of futuristic garage groove on Junk Man, the opening song on their new album Sencer Gets It Lit. “You’re talking ’bout gold but you’re selling trash.” There are plenty around these days selling snake oil, many available targets and Spencer has them in his sights. The guitars run at times through slow and menacing hypnotic surf riffs (Death Ray), weird and wired stripped-down phaser funk under spoken work (Worm Town), stuttering machine-gun spurts that drop into some kind of psych vortex en route to oblivion (When Push Comes To Shove) and pure warped trips (Rotting Money).

Spencer has always injected a dose of the spaced-out blues boy into his work, but there is still room, within his own vision, to edge closer to something more structured and based on his love of the blues. On Spencer Gets It Lit, it comes clearest in the form of My Hit Parade and, in parts, final track Get Up & Do It. Throughout the album though, they blend their unique mix of industrial percussion, sparse clangs that ring out from within, with the snaking extraterrestrial guitars that shoot their phased sounds in sporadic bursts. The album hits a more constant groove on songs like Primary Baby, a sonic cousin of his best Blues Explosion work, but for the most part Spencer is bedeviling the listener with the consistency of the unexpected.

At few points is there a signpost to where the band will take you next. It can be disorientating for sure, but it’s also the journey you accept when spinning a record by the Dolos of the garage world.

Spencer Gets It Lit is available now from Sister Ray.