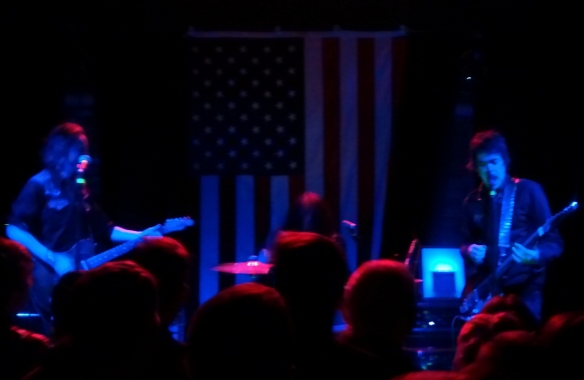 Louder Than War’s Christopher Lloyd attests that the Blues Explosion are still #1 in Birmingham.

The last time I saw The Jon Spencer Blues Explosion (JSBX) was in Birmingham during the 2002 ‘Plastic Fang’ tour. JSBX are a band I’ve seen many times, but the Birmingham date stood out as I had a terrible man-flu, and the knowledge that JSBX are so good that the idea of missing them live forced me to rise from my pit of despair to see them destroy the academy with almost military rock ‘n’ roll precision.

Thirteen years later and  your humble correspondent is man-flued up once more. The Jon Spencer Flu Explosion, if you will. It may have been thirteen years but the lure of the Blues Explosion is still strong, helped  by the strength of their latest, Daptone Studio recorded album ‘Freedom Tower’, a record up their with their very best.

First onstage were hand-picked support act Black Mekon, one of Birmingham’s finest. The three Mekon’s provided a frenzied assault of dirty drums, scuzzy sharp guitars, scratchy vocals and tons of attitude. It took just short of 30 minutes for them to tear through their ‘Stolen Bible 2’ album, demonstrating why JSBX, Guitar Wolf & Kings Brothers have all personally asked them to play gigs alongside them.

JSBX casually stroll on to no build up or over-dramatic fanfare whatsoever. They offer grins and a wave before Spencer yell’s “Bloooooooooze Explosion” and thirteen years quickly dissipate as every bad or average gig I’ve seen over that period dissolve from memory.

The set is fast and furious, focussing heavily on ‘Freedom Tower’. Few bands can play as damn funky and heavy as JSBX. For me when it comes to pure energy and euphoria, only James Brown and his band even come. Though musically worlds apart, at points their set reminded me of Daft Punk in the way both bands take the best bits from their most classic tracks and rework and chop them around until they reappear as an altogether more exciting an entirely new entity.

Jon Spencer is every bit the coolest front man on the planet, the audience can’t take their eyes off him as he thrashes away on the Theremin and howls like a man possessed. Judah Bauer has to be hands down one of the best guitarists on the planet, and Russell Simmons makes such a heavy and funky noise from the most simplistic of kits. By the time ‘2 Kindsa love’ kicked the encore into play, the whole room was enraptured. This is not mere hyperbole, the band ARE that good.

Thirteen years on and the Blues Explosion are unquestionably #1.