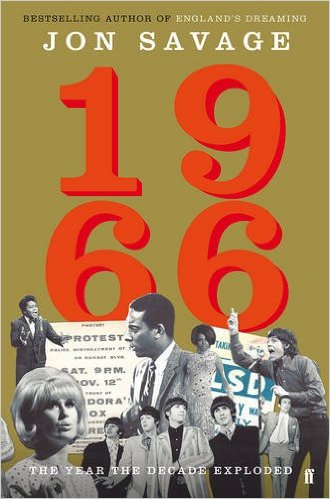 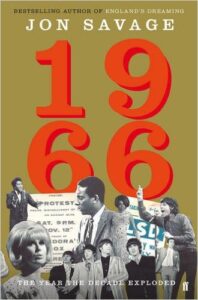 Jon Savage has consistently been writing great books that document music culture for years now. With the perfect balance between academic context, a micro attention to detail, great writing and a thrill for the music Savage has been documenting pop culture book by book and his latest, 1966, is the perfect companion to his classic Englands Dreaming – the number one book on punk rock.

The former Sounds writer, who was at the heart of punk and post punk, has made a name for himself for deeply intelligent books that tell the story with an in depth eye detail that on one level ticks all the academic boxes but is also driven by a passion for the music that brings his books alive and puts them in a different league from the dry tomes that normally dominate the form.

Englands Dreaming – his book about punk remains the key document on the era and his latest, 1966, is a brilliant concept expertly realised.

The fabled sixties were the decade when pop culture filled our lives with colour, ideas and hope. The venerated decade has been endlessly analysed and written about and put under the microscope and there seems to be little left to be said about those years when pop culture went mainstream until this great book which put the decade into a new perspective and perfectly balances the driving force of the music and puts it into context with culture, politics and the way we lived at the time in typical Savage style.

Each chapter starts with a song and explores all the angles and the cultural baggage that created the song or was sparked by it – with this unique format he somehow manages to pull in all the cultural force and energy that created the year and the fervent and wildly see sawing sound track to the year when all the loose ends created by the thrill of pop becoming the mainstream coalesced into something quite astonishing and a time when pop culture created hope and great art.

Jon Savage reflects on this fast forward on pop but doesn’t ignore the forces of conservatism that were fighting their own rearguard action – one chapter deals with the pro Vietnam Ballad Of The Green Beret giving the fulcrum of the sixties and a real balance. 1966 was the year that pop realised its own power and started to ‘grow up’, seven inch singles started to give way to albums but still retained the power to cram everything into one perfect 3 minute statement – the compression of sound and ideas that were the thrilling heartbeat of great pop – a compression of ideas that Savage unwinds and details in this great read. If 1967 and the summer of love was always seen s the high water mark of the decade, savage argues that 1966 was the really cultural high point – the following year saw it become pastiche and the year the two six’s clashed was where the ideas were really crackling.

Exquisitely written, stuffed full of great ideas and crackling with music, this is not only a great book about pop culture but about the sixties themselves and is a riveting and thrilling can’t put down read.