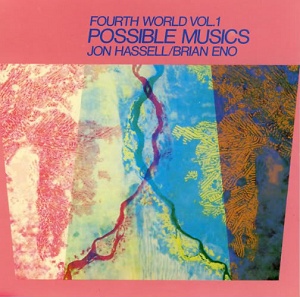 The collaboration between Jon Hassell and Brian Eno on the 1980 album Possible Nations was an inspired one. Maybe the lesser known of the two, Memphis born Hassell a trumpeter and composer trademarked his playing by feeding the sound through synthesizers and the like. His influence on World Music via his own coinage ‘Fourth World’ is undoubted and he in turn proved to be equally influential on subsequent albums by David Sylvian (Brilliant Trees), Peter Gabriel (The Last Temptation Of Christ) and David Byrne (My Life In The Bush Of Ghosts).

Eno needs little introduction – David Bowie, Robert Fripp and Talking Heads tucked firmly under his belt – he has performed with the likes of Roxy Music and produced the exploits of U2. The Godfather Of Ambient has influenced a generation (or two) with his musical tapestries and spacious exploratory compositions.

Possible Musics contains six tracks. All can be seen as repetitive to a degree but opener Chemistry sets the style for the album early on. It’s easy to see where the likes of Gabriel took their expansive inspiration from as African and Asian patterns inter-twine over Western backdrops.

Griot features a strained trumpet (often almost unrecognisable) over minimal percussion and faint drum sounds, it’s easy to see where today’s ambient and drone acts can trace back their lineage.

Highlight of the album, Ba-Benzele features a Pigmy style of music called ‘hindewhu’ where singing or whistling is performed with alternate high and low pitches to create a hypnotic effect. Sounds of rolling thunder embrace the feel of a space-age bee flying to escape the inevitable storm.

An Eno album wouldn’t be an Eno album without a curiously titled track and this is no exception when Rising Thermal 14° 16’ N; 32° 28’ E makes its appearance. Apparently named after the map co-ordinates of an area in the Sudan, it also translates into the image on the album artwork.

The final track, Charm (Over “Burundi Cloud”) clocks in at well over twenty-one minutes and sadly is maybe fifteen too long. It’s repetitive, but maybe slightly too much so and listening to the track soon turns to endurance.