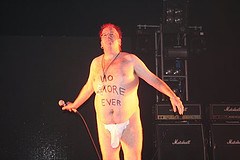 We are sad to hear that Jon Fat beast- the compere and rotund lunatic who was part of the Carter USM stage show has died.

Jon Fat Beast was a central figure in the baggy shorts and T shirts with band’s names on in big bold bright colours part of the indie scene of the late eighties and also promoted gigs in London at the Bull and Gate and other venues and kick started the career of many bands.

We knew him well and would bump into him in many dive club where he would have a certain presence looming large behind big Buggles glasses and rudely bright training shoes. He had a personality as big as his figure and was always up to something.

At Carter gigs he was showered with loveable insults when he went on stage- ‘You fat bastard’ the audience would chant and he loved every moment of it, so it seems fair to say ‘farewell you fat bastard and it was good to have known you…’