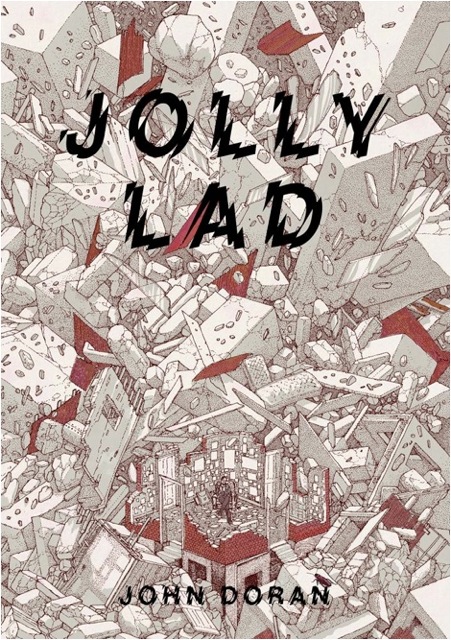 In perusing the opening pages of Jolly Lad, I was struck by the endorsement given to this book by Caitlin Moran. It described this fresh and genre bending volume as making ‘Withnail &I look like Little House on the Prairie.’ Having previously endorsed Emma Jane Unsworth’s Animals as ‘Withnail & I for girls’, the Times columnist not only reduced Bruce Robinson’s modern classic to a glib metaphor for hedonism, rather than hellish depression, but managed to inaccurately use it in the context of both books.

Whereas Animals is a venomous reproach to all things Bridget Jones, John Doran’s book owes its fascination to authors like Graham Greene and Henry Miller, but with a post-punk, grimy edge akin to someone like Abel Ferrara. As Doran makes abundantly clear from the start, he disowns any assumption that this book is a representation of drug and booze-addled despair and charmingly notes ‘For the most part, I really enjoyed drinking.’ Chroniclers of excess down the ages, from Omar Khayyam to Lord Byron to Roger Ebert to Irvine Welsh, have spoken of the near impossibility of divorcing good times from one’s demons. Both Ebert and Doran, however, have the added pressure of early faith and leftism to fall back on, and it is a measure of Doran’s prose and fundamental likability that saves his book from becoming another story for the eternal slush pile.

Indeed, if there is any phrase that can immediately inspire eye-rolling boredom and annoyance, it’s ‘Catholic Guilt.’ In Britain and America, not to mention the Irish diaspora in both nations, the Catholic Church has, bizarrely, been an arbiter for the artistic and the dispossessed. Numerous authors have embraced Holy Mother Church in their work or lives, from Joyce, Greene and Evelyn Waugh to Christopher Buckley, Norman Mailer and Isabelle Allende; either as radix malorum or raison d’etre. If one is not enticed by the theology itself, it is the unique culture and marriage of the arcane and banal that forever holds the appeal of the Vatican. The high of the Church, however, is not the beautiful and all-enveloping knowledge of Aldous Huxley’s ego-loss, but rather the masochistic love of a slaver achieved through the loss of self and will to extinction.

The illustrations in this book make this abundantly clear, almost like an instalment of Protect and Survive as directed by Nostradamus. It is especially clear with a depiction of a young Doran with stigmata at the foot of the cross. As one who was raised with even a comparatively modern Catholic education, the omnipresent images of the suffering Christ and various other Old and New Testament atrocities are an abiding memory.

However, Doran’s early notion of not exploring a hellish past wears thin, albeit in spectacular fashion, as he later documents his recovery through a re-imagining of The Divine Comedy with himself in the place of Dante. Again, the illustrations are more than a match for the prose, which is in the rich yet bullshit-free tradition of Jeanette Winterson. The skill of the book’s pictorial aspect, which can shift from Raymond Pettibon-inspired monochrome shock value to crude line drawing to a mixed media fever dream, is absolutely remarkable.

All of this would be for nought in incapable hands, but fortunately this book is one of the great first person narratives of recent times – funny, bruising and with an eye for the detail of horror (or, to annexe Lovecraft, ‘The Physiology of Fear’) – and combines the best of the New Journalism style with the Northern Literary tradition. Furthermore, as Doran explores the beginning of his writing for Vice, which would not only provide him with employment but also bring him renown as a writer, another redemptive aspect comes across, that of writing as a healing process. Doran’s honest and blunt writing never feels gratuitous or self-important, nor is it ever self-pitying – its selflessness is the key to its intrigue, as well as to Doran’s psychological make-up. There are brief glimpses of his columns here and there, but this is no anthology of cretinous hack work. It would not be as fascinating if that’s all it merely was, and I hope invoking the spectres of Winterson, Joyce and Hunter S. Thompson is to offer fairly high praise.

This is not the work of a Bright Young Thing – even by Doran’s own admission – but of a true maverick. Jolly Lad is utterly captivating and engrossing, with a unique helmsman who is magnetic and endlessly interesting, even if we are only with him long enough to cross the River Styx.

Jolly Lad by John Doran is available via Strange Attractor (the publisher’s) website.

All words by Alexander Garvey Holbrook and more of his articles on Louder Than War can be found at his author’s archive. He is also on Twitter as @XanHolbrook.