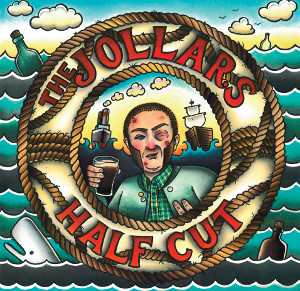 Louder Than War’s Nathan Brown gets taken on a musical socio-political journey round Cork City in the company of The Jollars, stopping for a few pints on the way.

The first thing that strikes you about this CD is the cover art – a great take on the Navy Cut fag packet of old and I’m expecting to see it make it’s way onto jackets, patches, t-shirts and maybe a few tattoos. The Jollars are a skinhead band hailing from Cork and manage to kick out a fair old racket considering there are only 3 of them. The songs are generally mid tempo and fairly musical – think Red Alert and you’re in the right sort of area – with solid drumming, a few bouncy bass lines and plenty of well played lead breaks. The guitar at times has a hint of a glam rock/Cock Sparrer sound and at others the rawness of Blitz. The singing alternates between gruff and sing song vocals rising to the occasional shout and there are plenty of gang vocals to boot. I can see why the record label cites Burial as a potential comparison, but I’d to throw in the Templars (but not their questionable politics) and Albertos Y Los Trios Paranoias (Snuff Rock era). There’s also a slight resemblance to (and clear influence from) their fellow Oirish purveyors of street punk Runnin Riot, whose singer Colin was originally due to contribute to this recording had he not passed too soon. There are also a few moments that bring to mind Agnostic Front or early Dropkick Murphys – when they had much more of a rough street punk sound.  There’s always a danger that when you mention Oi! or street punk, people will write off a band as being ploddy and with lyrics that leave a lot to be desired. The Jollars don’t fall into the trap of singing endlessly about “being on the street” and prefer to provide a social narrative – although they stop off for a few pints on their journey.  Thirsty work.

“Rebel Boot Boys” opens up the CD and is a tribute to the ‘erberts of their beloved Cork City. The first of many singalong choruses. An aside for those who don’t know: Cork is still known as the Rebel County thanks to the level of resistance it gave against British rule prior to Irish independence.

Then, like a metaphorical ACAB tattoo across the knuckles, the next 2 songs – “Mayo’s Finest” and “Wrathclyde” – lay out The Jollars’ views on the cops. I’d swapped “getting stopped by the cops at the airport under the Prevention of Terrorism Act” stories with bass player & singer Brian over a pint but “Wrathclyde” tells his tale of Strathclyde cops put to music. Nice play on words.  In the song “Mayo’s Finest” they identify the problem as being more than a few vindictive bully boys: “Laws are made for the powerful not for me and you”.

Street level analysis of political power continues with “Hang ’em high” – a suggestion as to how to deal with the Catholic clergy who held a stranglehold on Ireland for so many years. “The Fight” lays bare the way that the rich screw over the rest of us and get away with it with the help of their friends – a theme revisited on “Tommy No Bobs”. You could paraphrase it as “one law for them and another law for us” – not a new idea but still just as valid, if not more stark in modern times.

Emigration is a subject never far away in Ireland and “We’re Not Leaving” is time for it to rear its head. There is a new dynamic now in that people are still leaving Ireland but blame is now being placed at the door of migrants, which is something the Jollars aren’t happy about. “Thick like me” is a tale of a racist fuckwit mistaking boots and braces for symbols of fascism. These 2 songs illustrate where The Jollars sit on the issue of race and they make it clear – real skinheads ain’t racist!

Alcohol makes an appearance as “The Gone Offie” celebrates what sounds like the roughest, cheapest place to get pissed in Cork. “The Oi Father” isn’t a tribute to some Big Vern type character who looked out for all the young punks and skins. It’s a tribute to the fine stouts of Cork that “put that Guinness muck to shame” – and being a fan of Beamish myself I couldn’t agree more.

“Terraced Heaven” is the Jollars’ response to the Rejects’ “East End” with the classic football chant/claps/drum beat intro and plenty of “Oi Oi” shouts. And as the CD opened, it finishes with a reminder where the Jollars are from: “CITY! REBELS!”

So The Jollars give a thumbs up to Cork City FC, bootboys, Murphys and Beamish…and a kick in the nuts to the cops, the rich, the clergy, Guiness and racists. Seems about right to me.

The Jollars are on Facebook.  Get the CD from them or from Aggrobeat.