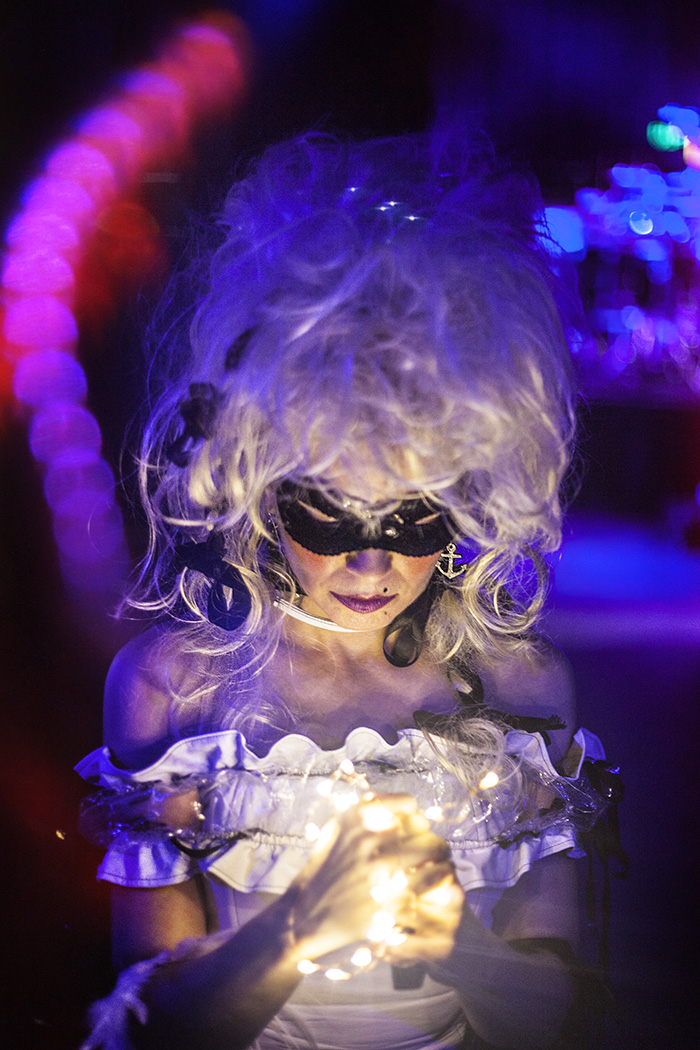 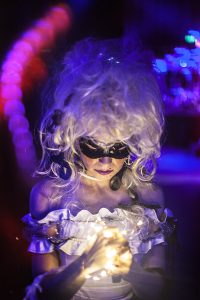 An accomplished, and spirited force on international and US stages as one of two drummers accompanying the iconic punk rocker Adam Ant, Jola is reverberating her way into musical history. Although often an enigma, shrouded in mystery, Jola is absolutely adored by fans. Her presence is marked by over the top, colorful fashions standing out and glittering in the background behind the beats. She recurrently can be spotted wearing a sparkling mask while performing, leaving an air of mystique surrounding her.

Aside from Jola’s spectacular appearance, she is a masterful musician. Just by watching her play one can actually feel her awareness, consciousness and exhilaration while stationed behind her instrument. She  seems to possess a musical empathy and an understanding of what it takes to make the band sound it’s best. She is also a regular blast to speak to, and is particularly kind to her fans.

Adam Ant, Jola, and the band will be playing a sold out show on December 21 at the Roundhouse in Camden, and then will be heading back to the US early in the New Year for a historic festival performance at the Honda Center in Anaheim, with Boy George, Nick Heyward, The Bangles, and a host of other great performers.

Louder Than War: Drummers it seems are the most mysterious members of the band.

Yes, drummers tend to be the furthest away from the audience, usually at the back of the stage, so I think the physical distance separating us from the audience plays a part in creating any mystery.  Add to that, the fact that the drum kit obscures a drummer from the waist down, then perhaps we do become these shadowy figures with only half a torso.

What inspired you to play drums?

A process of trial and error. I was always listening to music from a diverse range of genres.  Although I can sing, I wasn’t interested in being a singer.  Playing an instrument intrigued me more.  So I was quite disappointed to find that I didn’t feel comfortable or show any promising level of competence with any of the instruments that I tried to play. Apart from keyboards, they didn’t interest me either so I had zero desire to improve.  From a regular band set up, there was only the drums left to try.  As soon as I picked up a pair of drumsticks and sat behind a drum kit, it felt right.  And this time, I had a feverish desire to learn more.  I taught myself the basics.  Then I learned to read music as I wanted a better understanding of different genres.  This later enabled me to study music which I did for three years and loved it.  I had two great drum tutors: Pete Cater for jazz studies and Paul Elliott for technique and fusion.  These days, Pete leads the Pete Cater Big Band and Paul teaches and does sessions.  Paul recently came to Adam’s show when we played Newcastle this year and I popped round to his recording studio while we were in town.  Both fantastic drummers and down to earth geezers.

Since you tend to play with another drummer, do you find yourself competing for beats or just having twice the fun on stage?

I joined Adam’s band knowing that he wanted two drummers so I knew what was expected.  It felt quite natural to play with another drummer and very exhilarating.  There’s a moment, during our current arrangement of Stand and Deliver, when there’s five of us drumming simultaneously and I find that moment quite wild and stirring.  Because, by and large, there are two distinct drum parts in our arrangements for Adam’s songs, there’s no competing for beats.  The two parts have to reinforce each other in order to work though, and whether they will or not only becomes clear once we reach rehearsal stage and then get the chance to fine tune arrangements.

Do any of the gigs you’ve done stand out for being fun?

Many.  But one of the most fun and ludicrous has to be when I performed in a full length, furry porcupine costume with huge fur spikes poking out everywhere.  I was boiling under that getup but spent most of set chuckling to myself.

How did you come to be Adam’s drummer?

Pure chance.  I met Adam through a friend, Miles Landesman who I’d previously been in bands with, and who happened to be Adam’s guitarist at the time. Adam was looking for a new drummer and Miles suggested me. Adam arranged for me to meet him at a studio and we got on very well.  Luckily for me, he also liked the way I play and I’ve been a part of his band since then.

Aside from Adam’s band, are there any side projects you’d like to talk about?

I’ve been doing some songwriting, melodic but drum heavy songs.  Once I’m happy with them, a mate of mine, Alf Pisanelli, a composer and mix engineer, will work on the production.  It’s a bit of fun but if we’re happy with the results, it could go further.  As for bands, I’m always interested in potentially new band projects, especially so if the music excites me.

What tips do you have to improve drum independence?

I don’t think there’s any easy way unless you’re a child prodigy like Tony Williams or Elvin Jones.  You have to practice hard or play plenty of live gigs. Listen to as many different styles of music as possible.  If you’re trying to work out a part from a song and it sounds complicated, strip it down to basics, perhaps starting from the bass drum pattern, then once you’ve worked that out, add the snare part and so on.  When you’re learning to play a new rhythm or piece it’s crucial to play very slowly to start with. It’s boring but give your brains a chance to figure out what your hands and feet are trying to do. Then you can pick up the speed gradually.

How long does it take to learn a new song?

The basic arrangement of a new song doesn’t take long to learn. It’s the fine tuning that takes a bit of time.

Who puts together your fabulously sparkling costumes?  Does that atmosphere of secrecy wearing masks annoy you when performing?

Some of the costumes I put together myself.  Then there are those that are specially made for me by either Naomi Gibbs or Caroline Wildman.  Both very talented and hard working.  Naomi is a theatrical costume designer and Caroline runs Cathouse Clothing which specialises in latex and PVC designs.  I will draw a simple sketch of an idea I have for a costume, together with colours and the type of fabric or material I’d like to use.  I then forward this to either Caroline or Naomi.  They then do the difficult part and turn my sketch into a reality.  If a detail I’ve asked for isn’t practicable, they advise on how to make it work or suggest another option that will produce a similar visual effect.  They have a great understanding of design and know how to guide the basic idea into something workable.  It’s always a thrill seeing the finished costumes.  I can’t praise these two highly enough.

No, wearing masks isn’t annoying. Once you’ve played in a porcupine costume, wearing a mask is a stroll in the park.  But you’re right about the secrecy, as once the mask is on, it’s as though I’m looking out at the world through a spyhole or peering through some curtains.

What kit do you use?

I have a Gretsch New Classic with 10 and 12 inch rack toms, 14 and 18 inch floor toms and a 22 inch bass drum. My snare is a 1970s Gretsch snare that I kept from a previous Gretsch kit that I had to part with due to lack of storage space.  It was a stunning 1970s walnut Gretsch with a 24 inch bass drum.  I hated parting with that kit.  So much so, that I held on to that snare as a keepsake.  I use Paiste and Sabian cymbals.  All my skins are Evans Calftone apart from an Evans Hydraulic that I use for the 18 inch floor tom. They’re brilliant; a deep, boomy sound that’s sound engineer friendly. A revelation!

The Anthems tour we just recently finished in the States with the excellent Glam Skanks, followed by the Kings tour in New Zealand and Australia, were both cracking tours. A very enthusiastic reception and the reaction to both tours was brilliant.  It was our first visit to New Zealand too and it’s a fascinating country.  But I have to say that the show we did at the Greek Theatre was something else.  What a setting. Like a Roman amphitheatre.  The atmosphere was electric and the audience really went for it. L7 played a cracking set too.  They have a powerful, grimy guitar sound. I had a chat with Donita after the show; very stylish and down to earth.  I hope we catch up with them again.  We also saw our old mates Prima Donna, the fantastic LA band who supported Adam in the States in 2013. Definitely one for the memoirs.

Now that the Anthems and Kings Tours are finished, when are you next performing with Adam?

We’re playing the final UK date of the Anthems tour at the Roundhouse on 21 December 2017.  That’s sold out so I reckon it’ll be a wild night.  Then we kick off 2018 with a return to the States. We’re playing an all day festival with Boy George and a big line up of bands at the Honda Center, Anaheim on January 26th.  Then we return to Florida to complete the tour dates that were postponed this year because of Hurricane Irma.  I love being in the US so a return visit will be a most welcome start to the New Year.

All words by Eileen Shapiro. More of Eileen’s writing can be found in her author’s archive. Photo by Adam De Ville