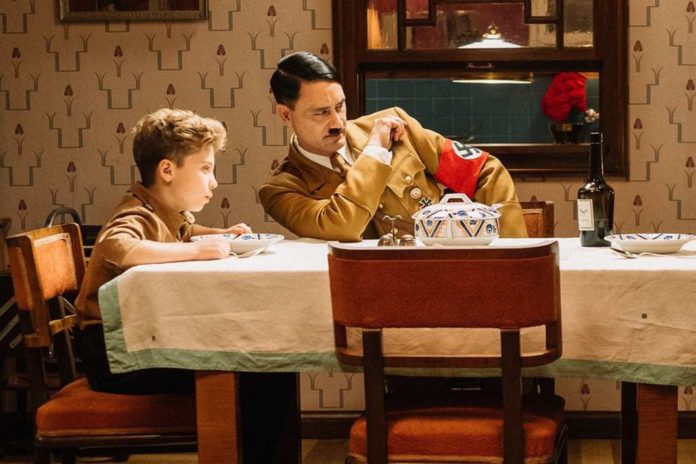 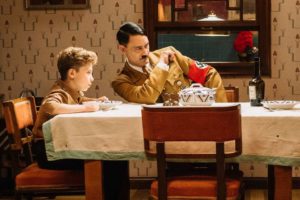 A knockabout comedy about Nazis and Jews really shouldn’t work. But Jojo Rabbit’s perfect balance of hilarity and sentiment has struck a chord with film fans and it’s picking up prizes in advance of Oscar night, where it’s up for six awards. Tim Cooper joins the fan club.

Anyone who’s a fan of Wes Anderson ought to love Jojo Rabbit. It’s a side-splitting Holocaust comedy (yes!) directed and produced by a Maori-Jewish comedian (yes!), who also stars as Hitler (yes!), in a warm story of love, reconciliation and survival in Nazi Germany (yes again!). In fact it’s more Wes than Wes. 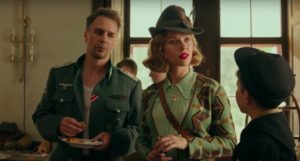 The film’s warm heart lies in the performances of 10-year-old English newcomer Roman Griffin Davis as the titular Jojo, a fatherless Hitler Youth enthusiast whose blind fanaticism is challenged by his suppressed sensitivity (he gets his nickname when he’s teased for refusing to show his ‘manliness’ by killing a rabbit) when he finds a teenage Jewish girl, Elsa (an equally strong performance by New Zelander Thomasin McKenzie) hidden in his home.

Powerful and conflicting emotions rise to the surface as the pair reluctantly get to know one another, bound together by the realisation – carefully explained to Jojo (and us) by Elsa – that if Jojo turns her in, he and his mother (Scarlett Johansson, delivering a hilarious turn in a series of fantastic designer outfits and a particularly jaunty Tyrolean hat) will be rounded up as collaborators and killed.

Strangely (to my mind, anyway) the film has ‘divided the critics’, with the Guardian’s Peter Bradshaw particularly vehement in his objection. Most peculiarly, he failed to find it funny, whereas I was falling off my seat, not least when Elsa lectures Jojo about his wafer-thin allegiance with the withering takedown: “You’re not a Nazi, Jojo. You’re a ten-year-old kid who likes dressing up in a funny uniform and wants to be part of a club.” 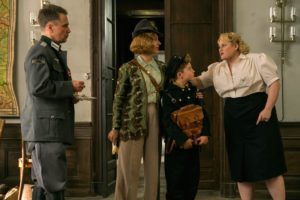 Moral or political objections (and inevitably there have been some – though I noticed that Jewish publications tended to be lavish in their praise) seem misguided for a film whose whole principal purpose is to mock fanaticism and hatred: it’s actually billed on the posters as “an anti-hate satire”. And heaven knows we could do with one of those now.

Behind the belly laughs – and, whatever the critics found in the seclusion of their private screening room, there were many in the cinema where I watched it – it’s a powerful story of love triumphing over hate, with a great big heart. I found it hugely moving and I couldn’t recommend it more strongly.

More about Jojo Rabbit at the Fox Searchlight official website.