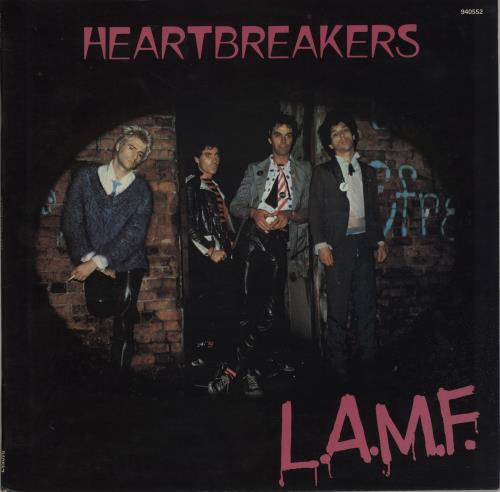 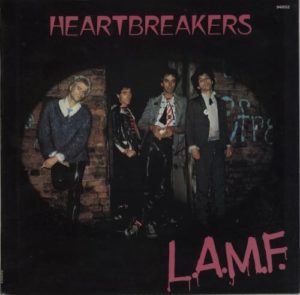 For those readers of Louder Than War that are unfamiliar, L.A.M.F. had possibly the weirdest and most troubled gestation of any album from the punk era; constantly mired in management strife, inter-band squabbling, bitter disagreements over the mix and a budget that ran into the red pretty quickly, the album destroyed both the band and the record label.

This latter was, in part, due to the bands propensity for sending record company-funded taxis to Manchester and Birmingham to collect deliveries of heroin for them from various “connections” who apparently promised better quality gear than was then available in London.

The band had arrived in London with a rather colourful history. Thunders and drummer Jerry “Nigs” Nolan had been celebrated members of The New York Dolls whose rise and fall has been much documented over the years hence me not reiterating it here.

Suffice to say, The Heartbreakers were very much a continuum of The Dolls whose snotty proto-punk sound had pre-empted much of what was to come.

Paths and careers interlink throughout The Heartbreakers story- The Dolls were laterally managed by Malcolm McLaren who of course took much of their shtick and moulded it into the Sex Pistols nascent look and sound.

Richard Hell, who’d originally joined The Heartbreakers as bassist and co-writer in their initial formation before being ousted by Thunders, provided both McLaren with a template for an image and Glen Matlock with an idea for “Pretty Vacant” (he saw a Hell poster with “Blank Generation” on it giving him the notion for the song).

Of course, The Heartbreakers were invited over for the Anarchy Tour in 1976 (billed as being “ex- NY Dolls”) and quickly impressed the other bands with their muscular sound and powerful and spare playing. Steve Jones in particular copped loads of Thunders’ thug-riffs and moves and early footage of The Pistols often sees him pulling “guitar hero” faces and shape-throwing poses, aping his hero.

The band was eventually signed to Track Records by Kit Lambert and Chris Stamp, the eccentric and enigmatic duo who managed The Who. Most of the majors wouldn’t touch the band with a bargepole due to their burgeoning reputation for trouble and as drug-fiends.

Track put the ‘Breakers firstly into Essex Studios and laterally The Who’s Ramport Studios. From the get-go, the band found it easy enough to achieve cohesion and impetus due to their class as musicians and their familiarity with the material which they’d been honing live pretty much non-stop for a few years. 300-odd takes (!) were recorded which were recently re-evaluated for this current release before being preserved in digital format for posterity.

Another interesting aside saw flamboyant manager Leee Black Childers breaking into the labels offices to appropriate the tapes back in 1977 after a dispute over ownership with Lambert and Stamp. As I’ve mentioned, the recording and subsequent mixing of L.A.M.F. was something of a troubled journey for all involved and the reality of it is that it’s really pretty miraculous that it ever saw the light of day at all.

The mix was the real trial for all involved; band members were booking studios on their own and attempting mixes that the others then nixed. Nolan hated the original mix and refused to have anything that he considered a “ballad” on the album and he subsequently left, returning as a hired hand some months later. Producer Speedy Keen (he of Thunderclap Newman) was an odd choice of producer, but given the volatility of the band, it’s likely that he was seen as a steadying hand at the wheel.

The critics pretty much mauled the record on its release; they all agreed that the songs were huge but that the “muddy” mix basically tripped the record up. The disappointment of writers like Julie Burchill and Nick Kent (who’d championed them from the off) was palpable.

It has since transpired, that given the cassette release at the time sounded excellent, that the problem was actually at the pressing stage- the album’s sound itself was for the most part, pretty good and history seems to have rewritten itself as regards the original album and its dull sound on vinyl.

Fans were less than bothered about this; remember, most teenage punk fans would have been playing records on their parents Dansettes or 70’s style “music centres” (I know I was!) as proper stereo systems were way out of most of our price ranges.

I guess if you had an older sibling with a decent Hi-Fi you were sorted. The thing that baffled a lot of the young punks was that, “Chinese Rocks” and “Born To Lose” aside, much of the album wasn’t particularly “punk-y”.

The album harks back to a lot of what has gone before. There are elements of early rock and roll in there, doo-wop, Shadow Morton’s girl groups, garage and proto-punk and even a hint of swaggering glam at times. Of course, these were all touchstones of the New York Dolls, too; The Heartbreakers added a frisson of genuine danger, junkie glamour, punk rock dirt and their own on-the-verge-of-collapse brilliance and the fourteen songs are a perfect collision of the new meeting the (recent) old.

This 40th Anniversary edition is one in a series of “definitive” editions that have appeared over the years; Tony James did a mix back in the eighties (which is pretty good) and Thunders himself sat in on a remix which became “LAMF Revisited” which is again worth owning. I’m an obsessive- I’ve got just about all of them. Every time I see a copy in a record shop I am weirdly compelled to buy it. There is evidently yet another mix doing the rounds from a few years ago that is taken from the French pressing of the album which is by all accounts different and yet another “must have”. And yes, I’m after it, now…..

Opening with Born To Lose (laterally called Born Too Loose on single releases) sets the scene pretty perfectly; the guitars of Thunders and Walter Lure sizzle and scythe around each other and Thunders’ signature loose and fluid licks are perfect. Bassist Billy Rath and Nolan are an unstoppable force and the song has a deceptively simple-seeming structure and a chorus sent from R&R heaven. The verses have a chugging boogie to them and it’s often neglected in reappraisals that The ‘Breakers had a real groove about them that set them high and above their U.K. contemporaries at the time. People still wax lyrical about the live power and swagger of the band onstage at this time and it’s evident that this was a band that could really turn it on as required.

Baby Talk showcases Nolan’s Gene Krupa-inspired drumming. He had studied at the feet (or at the very least, hung around the peripheries) of the great man as a youth and those breathless rolls and jazzy snare cracks enliven Thunders and Lure’s slithering riff. Sleazy is often a word used to describe the Heartbreakers music and this one pours it on in greasy bucket-loads.

It’s Not Enough is the closest thing to a ballad on the album despite Nolan’s disregard for slow songs. The new mix brings the massed acoustic guitars up for air and the ghosts of Thunders beloved Dion and The Belmontes and Ricky Nelson are evident in the aching vocal. It does, however, retain that downright nasty edge that gave the Heartbreakers their identity.

Chinese Rocks was the basis for lengthy ownership disputes; it’s now clear that Dee Dee Ramone (who of course is name-checked in the verse) wrote the vast majority and both Hell and Lure have their grubby fingers in there, too. It’s an anthem of and to heroin use. Let’s not soft-soap this; it literally glamorises smack use and drops it into a High School Hop with Lure and Thunder’s gleeful vocal as mischievous as you could imagine. Those thundering toms in the choruses from Nolan simply add to the songs black and dangerous allure.

Pirate Love has a swing beat from Nolan and a razor-sharp riff throughout. “I never needed it so bad” sings Thunders in the songs dénouement and one wonders whether it’s a love song to drugs or to a girl. I’d go with the former.

That’s the thing about L.A.M.F; it is literally soaked in drug references and the nod-and-a-wink, curled lip insouciance and all-knowing sneer drips from songs that are ostensibly about girls, cars, broken hearts and other simpler, more innocent subjects. I mean, “One Track Mind”? That’s clearly a cheeky opportunity to get the term “track” into a song that’s supposedly a tune about love and obsession, ferchrisakes!

I guess that’s what set them apart. They actually celebrated their love of chemicals to the extent that Thunders and Nolan wanted to change the name of the band to The Junkies during a headlining U.K. tour with a youthful Banshees and The Models. This was the type of self-destructive and bloody-minded attitude that eventually did for them.

Goin’ Steady again takes a relatively simple and innocent song and twists a needle into its veins, adding that dark, sex-beat feel that is a staple of the album. There’s something inherently wild, corrosive and untamed about L.A.M.F. despite the veneer of boy-meets-girl in a lot of the lyrics.

Do You Love Me closes the album and The Heartbreakers take the old Contours doo-wop standard and open the throttle to its full-throated capacity. The spoken intro, with Thunders strangled and slightly unhinged vocal, leads into a song that’s less about love than about the Heartbreakers absolute nihilism. The Pistols may have sang “And we don’t care” but the Heartbreakers genuinely didn’t give a fuck.

L.A.M.F. is unbelievably forty years old this year and unlike many of its contemporaries, it hasn’t aged a jot. 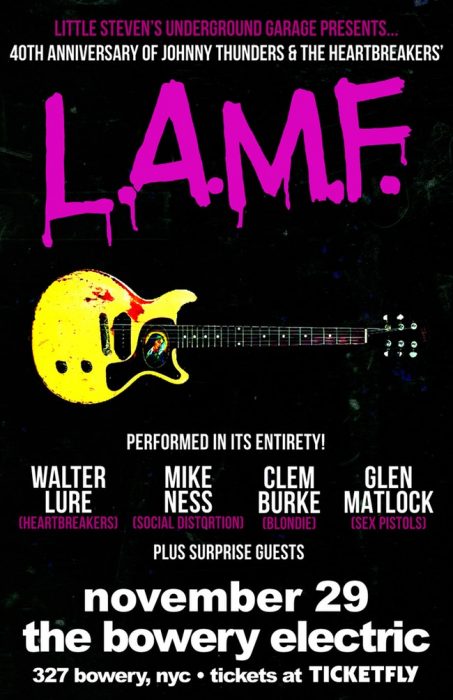