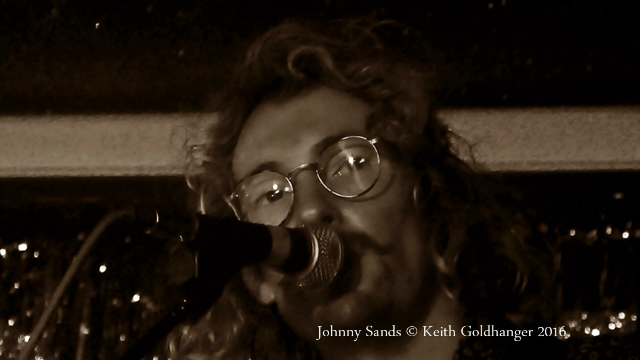 One man band Johnny Sands has captured the heart of Keith Goldhanger who pays another visit to one of his rare London shows.

Johnny Sands is another person who seems to have simply drifted into our lives one evening, stood on a stage, plugged everything in and had one of us proclaiming before he stepped down that this music was destined for the living room.

The fab four, the Seattle trio the husband & wife/brother & sister duo and now the solo artist.

The numbers are dwindling as the technology gets bigger and better.

Johnny Sands isn’t just a bloke with a guitar singing about his lost puppy. This chap is a one man Radiohead, a man playing us stadium sounding anthems that have made some of us double check out mp3 players when it’s set on shuffle.

Tonight sees Johnny returning to the Capital for a one off show with She Drew The Gun,an act that deserves greater scrutiny to give the band the best attention it deserves (watch this space).

The Moth club is busy and Johnny stands alone with his electronic gadgetry and guitar, singing the tunes we really have been listening to in our living rooms late at night during the recent long hot summer. If East India Youth can eventually get seen by the hundreds that we’ve stood with over the past few years then there’s no reason why we cannot experience the same with Johnny. ‘Das Pop’ at the tail end of the set is just crying out for some backing vocals from an enthusiastic audience and the occasional bass drum that creeps up on us during most of these tunes is also something to get the adrenaline flowing.

These tunes are as good if not better than what Radiohead have thrown our way recently played by a charming man from Liverpool, with a set of tunes that are big and anthemic and deserving of something larger than one mans living room. Whether or not we’ll ever get the big lights dry ice and additional visuals isn’t something we’re too bothered about at the moment.

The tunes we have available are the best recommendation on offer at the moment.