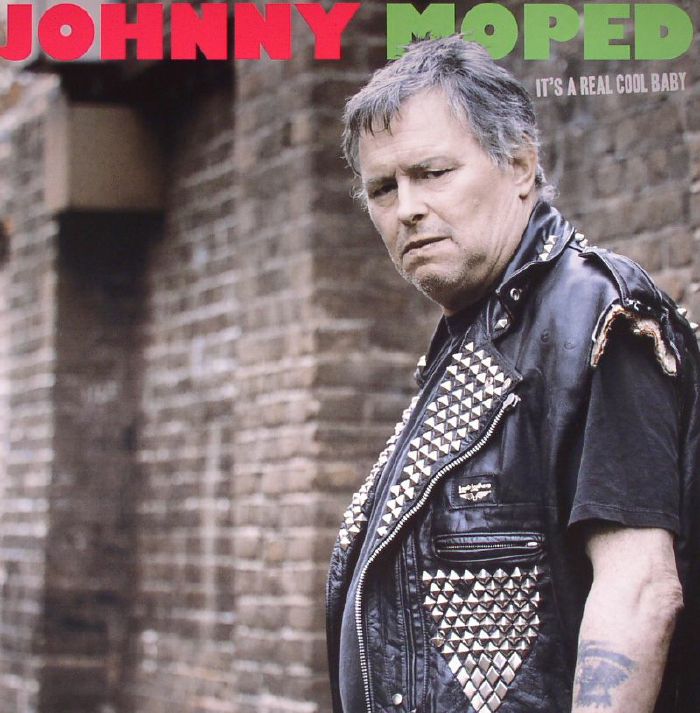 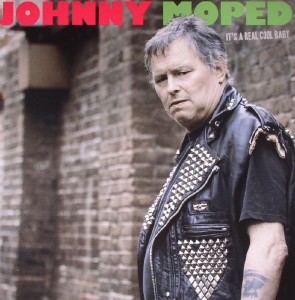 Er, hot(ish) on the heels of Mr Moped’s return with the corking double A sided single ‘Ain’t No Rock ‘n’ Roll Rookie / Super Woofa’ the lost man-child of punk is back with a 16 track LP in the shape of ‘It’s A Real Cool Baby’. (Also available on CD , if you must, although you might have missed out on the limited run cassette – yes compact cassette! – release by now).

It comes as no surprise – or disappointment – to regular Moped followers that Johnny still appears to be living somewhere in late 1978. November, at a rough guess.

And so to business. The album kicks off with title track and recent single ‘Real Cool Baby’ – it’s a true Moped rocker with Johnny lusting after the subject of the song – while worrying that he’s got to go and get his bike repaired. A true punk rock dilemma!

In truth it’s not that much different to previous single – and next track ‘Ain’t No Rock ‘n’ Roll Rookie’. These two tracks set the template for the album; fast, short, basic rock ‘n’ roll delivered a la Moped. The whole album barely scrapes the 38 minute mark, not that it matters – with Johnny he says what needs to be said and gets out. No frills, basically.

Even the more considered ‘Everything Is You’ only clocks in at 2 minutes. It’s just as well really as the album is a mix of old and new material – and you’d be hard pressed to see the join.

The new studio recordings of ‘I Believed Her Lies’, ‘I Wanna Die’ and ‘Musical Bore’ are old live favourites, dating back to, quite possibly 1978(?), but fit right in alongside new material such as ‘Simon Can’t’ which sounds to these ears like a pop at the nations number one music impresario. That song title might be a typing error too…

The only possible gripe is that the album features all three singles released as ‘Everything Is You’ has now been culled from the album. But given the time it’s taken Johnny to follow up 1990’s ‘The Search For Xerxes’ let’s cut the man some slack. Anyway the inclusion of ‘Super Woofa’ is just fine with me – along with finally being able to hear studio recordings of the likes of ‘I Believed Her Lies’ – it’s one of the highlights of the album.

Ramshackle and idiosyncratic as it is – and never more so than the er, curious ‘Paint My Aubergine’ – the album works. Not least thanks to sterling work from original Mopeds Slimey Toad and Dave Berk. Some people might point to the riff in ‘Honey Bun’ that bears a passing resemblance to a certain song by another bunch of punk rock chancers of a similar vintage, before it veers of in a direction only Johnny Moped could take it in. But that would be missing the point.

The bottom line is this is an album many thought would never see the light of day and I for one am grateful for it. It might not win over legions of new fans, it probably won’t shift mega units, it’s not pushing the boundaries of modern music, but I don’t care: It’s Johnny Moped, what did you expect?!

All words by macthehack, part time punk (retired), sometime freelance scribbler on music, sport and television, when not trying to hold down a day job. Jaundiced views and biased rants available on an irregular basis atteatoastrockroll.blogspot