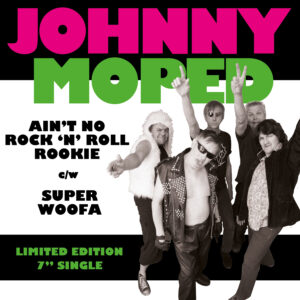 Johnny Moped has been away for quite a while. A long while. But now he’s back with a brand new single, off the back of a wave of interest in the man responsible for such classics as Incendiary Device, Darling, Let’s Have Another Baby and er, Wee Wee.

The man who can count Chrissie Hynde and Captain Sensible among his former band-mates, last troubled a record pressing plant with 1990’s The Search For Xerxes album. But it’s the three singles and 1978 Cycledelic album on Chiswick records that he remains fondly remembered for.

A lot’s happened since Darling, Let’s Have Another Baby saw the light of day as a 7” single. The internet, CD’s, mobile phones, air travel… OK one of those is a fib, but 37 years is a long time. So what’s on Johnny Moped‘s mind with so much to catch up on?

Well if the double A-side single of Ain’t No Rock’n’Roll Rookie and Super Woofa is anything to go by, the answer is, absolutely nothing. The good news for Moped fans is that Johnny, Slimey Toad and Dave Berk appear untouched by the passing of time.

As if to emphasize this half the lyrics to Rock’n’Roll Rookie are a roll call of past Moped glories over a pleasingly crunchy soundtrack.

But the real treat is the 50’s infused Super Woofa which comes complete with female backing vocals (shurely they must be the Mopettes?) and rasping sax, with a fluid up and down the fretboad bass line holding it all together. Glorious.

On this evidence the news that Johnny, Slimey Toad, Dave Berk plus new recruits Rock’n’Roll Robot and Jacko Pistorious are currently finishing off a new album, suggests we may finally be about to get a true successor to Cycledelic.

For now though these two slices of classic Moped are more than enough to confirm that he’s back and he can still boogie woogie.  1, 2 cut your hair – it’s 1978 all over again.

All words by macthehack, part time punk (retired), sometime freelance scribbler on music, sport and television, when not trying to hold down a day job. Jaundiced views and biased rants available on an irregular basis at teatoastrockroll.blogspot.