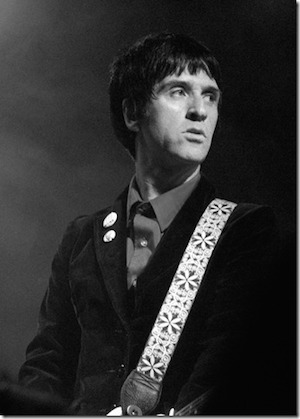 Johnny Marr in Wolverhampton. What’s not to like about Johnny Marr? Nothing, it’s all good according to Christopher Lloyd.

Johnny Marr has to be one of the coolest 51 year old’s on the planet, his enthusiasm towards life is refreshing, the refusal to reform The Smiths, his oeuvre, the frequent running, look at the man – he’s a poster boy for both good attitude and good health.

What is there not to like about Johnny Marr?

Johnny Marr is touring to promote his second solo album Playland (Louder Than War review here), a record featuring eleven tracks of spiky, yet textured songs that could only have been made by a pioneer of the indie-pop sound.

These songs translate well to the live area, an area which finds Johnny in his element. It’s his show and it’s his guitar that is set a few notches considerably higher than those of his band mates, all of whom play with a passion that shakes away any fear that you are watching Johnny Marr plus session musicians, and are in fact watching a true band, just with a slightly louder lead guitarist.

The set is split pretty fairly between both his solo albums, but there’s also a fantastically brooding version of Getting Away From It from the Marr/Sumner Electronic project.

And of course there’s The Smiths. It would be nice to review Johnny Marr and focus only on his new material, but Johnny is more than proud of his back catalogue, he understands his fans love of it and he sure isn’t going to disappoint them. Smiths classics where thrown into the mix thick and fast, from Still Ill through to set closer How Soon is Now, these songs are legendary/classics/milestones (Don’t delete – all are applicable) and were played passionately, and dare I say were considerably more enjoyable than some of the versions that Morrissey has been routinely droning out on some of his recent cash in extravaganzas.

What’s not to like about Johnny Marr? Nothing really – *There was an inexplicable cover of Lust For Life towards the end of the set. It seemed very pub band bland, and it was most bizarre. We’ll pretend it never happened.*

Photo © Elspeth Moore from Johnny’s show at Leeds in March.