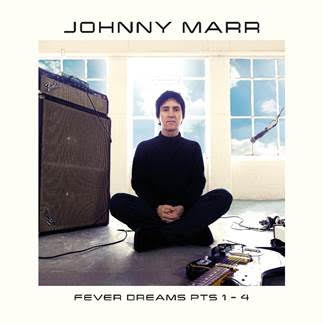 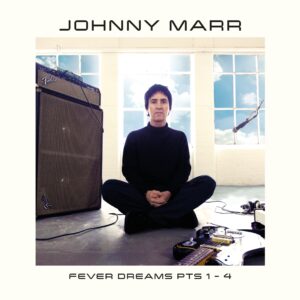 Fever Dreams Pts 1-4 is Johnny Marr’s fourth solo album, following The Messenger (2013), Playland (2014), and 2018’s Call The Comet. As its title implies, it is divided into four chapters. All 16 songs ultimately make up a fantastically expansive work, his first double album.

“I wanted this album to sound classic, and universal,” says Johnny Marr. “That’s how I felt. I wanted to look inside, but make really outward-facing music. And now I’ve finished it, I think it’s the most ambitious solo record I’ve done.”

Johnny’s musical chops are beyond reproach as he builds on his familiar guitar sounds with sequencers, synths and beats often coming to the fore. The high point for me is the vocals, his voice has matured and he sounds more assured on Fever Dreams than on any of his previous releases. The album is a culmination of all the elements of Marr’s post-Smiths’ work, taking influences and sounds from the various musicians and projects he’s been involved with/in, even saying himself, “there’s a set of influences and a very broad sound that I’ve been developing – really since getting out of The Smiths until now. I hear it in this record. There are so many strands of music in it. We didn’t do that consciously, but I think I’ve got a vocabulary of sound. And I feel very satisfied that I’ve been able to harness it.”

I’ll be honest, at first, I found it all a little disjointed, even though I was familiar with half of the 16 tracks. Over 70mins it’s a clash of styles and ideas, but then looking and thinking about the title again and it clicked. Marr explains (at the start of the first lockdown), “I just found myself, like everybody, with this open vista of time and uncertainty, so I set about doing what I’d normally do if I wasn’t doing gigs – which was to make a record and the phrase ‘fever dreams’ just seemed to chime with the way my life immediately felt”. The record reflects on his ‘Covid journey’ from the uptempo New Order-ish beats of the opening Spirit Power and Soul through to the immersive finally of Human. A lesser artist may be maligned for releasing such a varied album but this is Johnny F**King Marr and let’s be honest, after 40 years in the industry, he can pretty much do what he wants.

So what of the music? Well, 9 of the tracks have been available for a while. Pt 1 was released in October 2021 featuring the quartet of Spirit Power and Soul; Receiver; All Of These Days and Ariel. As mentioned the opening track is New Order-ish with its driving beats; perhaps a knowing nod to the time Marr spent in Electronic with Bernard Sumner. Receiver starts with a heavy guitar motif but then turns into a bit of a dance-pop tune whilst All These Days has a ‘90s Britpop sound augmented by a ringing 12-string riff. Ariel is possibly the strongest of the opening tracks (named after a poem by Sylvia Plath), again with his trademark complex 12-string weaving throughout.

Pt 2, consisting of Lightning People; Hideaway Girl; Tenement Time and Sensory Street, quickly follows, as reviewed by yours truly in December. This is a more confident set as Marr pays tribute to his fans and also indulges in nostalgia, looking back at his childhood.  Pt 3 includes Night And Day, the track being a perfect balance between the jangle of Marr’s past and the drive of more recent solo work. It’s got all the hooks and melody you could wish for with a bit of euphoria thrown in for good measure despite it offering glimpses of the heady, angry summer of 2020; and the way the pandemic intersected with the murder of George Floyd and the arrival of Black Lives Matter. “Fuse burns up / The world stirs up / The news shakes up / The mood blows up.” Counter Clock World revisits the early ’80s. It’s got a motorik drive with an ‘American alternative’ edge perhaps influenced by his time with Modest Mouse. This set finishes with the (mainly) spoken word and hauntingly understated Rubicon.

Pt 4 kicks off with God’s Gift, which has a swagger that a track with a title like that deserves. The Whirl is melodic with liquid guitars poured over chunky riffs. After moving through so many moods, sounds and meanings, Fever Dreams Pts 1-4 ends with Human, a beautifully redemptive piece, possibly the highpoint of the whole set, which insists that “better’s got to come”, and brings the album’s sense of intimacy and raw humanity to a closing peak. Marr himself said “when I was getting towards the end of this record, it felt like a journey, and I wanted the ending to be deliberate. So the idea of something intimate – which an acoustic guitar suggests to me – and melodic, and almost classic, for want of a better word, was in my mind.”

To celebrate the release of the album Johnny Marr has announced a series of in-store signing appearances at indie record shops across the UK.