On Monday guitar god Johnny Marr returned to Leeds’s Brudenell Social Club a year on from his first solo tour’s humble beginnings in the same venue. How did it go down? Louder Than War’s Josh Norcliffe tells all… 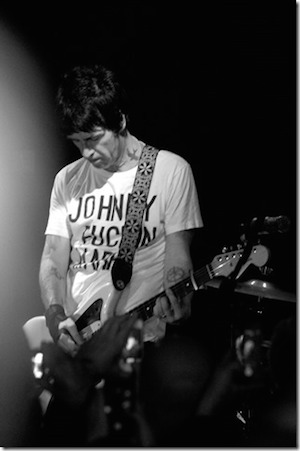 Tonight the messenger himself provides a dynamic set that is seemingly unrestricted by his protective cast (he shattered a bone in his hand after falling whilst running a few weeks back).

“Let’s get all of the falling jokes out of the way. It really bloody hurt actually”.

The former Smiths man is unyielding from the word go, ‘Upstarts’ is arguably the defining moment of the 50 year old’s debut LP. The truth is, Marr still has incredible energy for a man who’s been the craftsman behind some of Britain’s most important records. One of which is one of Marr’s own favourites ‘Panic’, which quickly casts aside any doubt over Marr’s singing voice and inability to perform Smiths hits well.

From the moody lines of ‘The Messenger’, through to ‘Generate! Generate!’ and ‘The Right Thing Right’, tonight signals the beginning of the end to Marrs first solo chapter as he debuts new tracks in ‘Boys Get Straight, Little King and Kind of Day, which suggest a slight change in direction. If the first record was a pleasant surprise to some, it may come as more of a shock that the new songs indicate his solo chapter has legs.

The biggest celebrations are saved of course for the classics as ‘Stop Me If You Think You’ve Heard This One Before’, ‘Bigmouth Strikes Again ‘and ‘There Is a Light That Never Goes Out’ all feature in the hour and a half set. In a venue where the Smiths wouldn’t be out of place (virtually no barrier between band and audience and people stood on chairs to see), tonight is a healthy trip down memory lane, back to a time when serious statements were made in popular culture and vintage NHS glasses were ‘cool’.

Marr rightly saves the best for last, ‘Please, Please, Please Let Me Get What I Want’ has the Brudenell’ up in arms and a surprise version of the Clash’s ‘I Fought the Law’ is followed by closer ‘How Soon Is Now?’ which cemented his place in indie folklore almost 30 years ago.

Marr’s legacy was secured years ago but tonight’s an example of the guitarists on-going desire and work ethic. As astonishing as the birth of Marr’s path was, it’s more surprising to be saying it’s some of his best work.