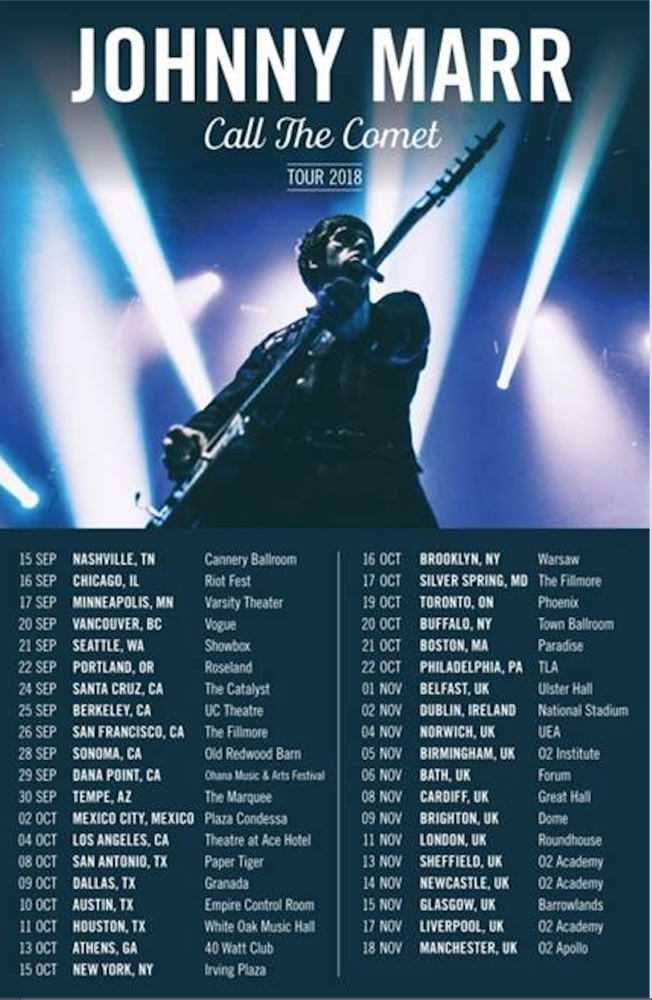 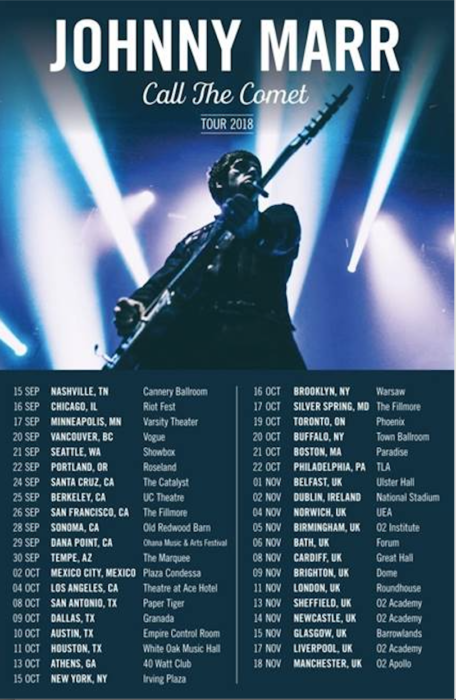 Legendary Smiths guitarist and acclaimed solo artist Johnny Marr has announced details of a major tour in support of his new album‘Call The Comet’ which will be released on June 15th. Commencing in Nashville in September, it includes a big London gig at the historic Roundhouse and concludes with a homecoming show at Manchester’s O2 Apollo.

Johnny Marr is currently completing a tour of intimate venues with a handful of remaining dates in the USA and Canada. The Guardian’s review of his Islington Assembly Hall show concluded that it was “a night that finds Marr elevated to a symbol of alt-rock righteousness.” At the Brudenell in Leeds, Louder Than War witnessed “a sweatshod celebration of a decades long quest of guitar pop brilliance.”

Tickets for the tour go on sale this Friday, June 1st.

Recorded with his band at Marr’s Crazy Face Studios in Manchester, ‘Call The Comet’ is his third solo record and follows the critically acclaimed Top 10 albums ‘The Messenger’ (2013) and ‘Playland’ (2014).

“Call The Comet’ is my own magic realism,” says Marr. “It’s set in the not-too-distant future and is mostly concerned with the idea of an alternative society. The characters in the songs are searching for a new idealism, although there are some personal songs in there too. It’s something that people like me can relate to.”

Already previewed by the singles ‘The Tracers’ and ‘Hi Hello’, other highlights include ‘Actor Attractor’, ‘Walk Into The Sea’, ‘Bug’ and ‘Spiral Cities’, the latter of which is already established as a favourite in Marr’s live shows.

‘Call The Comet’ is available to pre-order from https://lnk.to/CallTheComet, with ‘The Tracers’ and ‘Hi Hello’ provided as an instant download. The album will be released on digital, CD and vinyl formats along with some special D2C bundle packages.