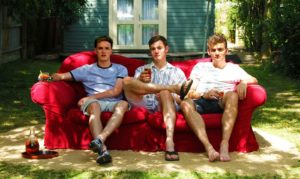 Louder than War have a listen to more infectious noisy pop from Johnny Kills.

Riding high on the momentum of their debut single here Brighton/London/York based garage-surf trio Johnny Kills release the latest in a string of insanely catchy tunes (here and here) with hooks Moby Dick couldn’t avoid.

However, compared to their previous output, the brilliantly titled ‘My Shirt Guy is High’ is a laid back, horizontal affair that feels like the complete antithesis. But hold on a mo. This isn’t Johnny Kills losing their edge or going soft on us.  This is a band spreading their artistic wings and showing what else they have in their arsenal.

This is a welcome tuneful rest from the 100mph pop punk wonkiness that we’ve had so far from JK. But don’t get me wrong, this is still gloriously wonky, but it works brilliantly as a pop song too. The throbbing bass and at times euphoric keyboards meld nicely with the niggling guitar riff that manages to dig its way under the skin like a particularly persistent, yet tuneful splinter. (I am fully aware that that last analogy is very deserving of a slap, but I cannot think of another way of describing it. Sorry, not sorry)

The lyrics complain of boredom and the daily drudgery of life, yet there’s no self-indulgence here. This is very much a tongue in cheek whine that has equally got its heart on its sleeve and its foot on the distortion pedal.

Just like what has come before, it’s infectious and annoyingly bloody good for a trio of early 20 somethings. Listen to this now.

My Shirt Guy Is High was produced by Alex Greaves (Seeing Hands, Avalanche Party, Colour of Spring) at The Nave studio in Leeds, and mastered by Pete Maher. It is being self-released via Johnnys Killer Records on July 25th.