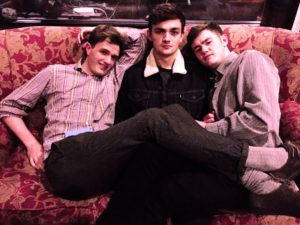 Johnny Kills – Let’s Talk About Me

Johnny Kills finally get around to releasing their debut single and it’s a cracker!

I’ve been a fan of Johnny Kills for a while now having reviewed their previous demos here and here. Their brand of garage rock punk is completely and utterly infectious and June 5th has seen them finally release their debut single proper Let’s Talk About Me. Produced by Alex Greaves (Seeing Hands, Avalanche Party, Colour of Spring) at The Nave studio in Leeds, it is being self-released via Johnny’s Killer Records.

Let’s Talk About Me is about going out with people who are too completely wrapped up in themselves to have a proper conversation. Their debut pulls no punches and builds on their brilliant demos over the last 12 months.

Sludgy, distorted drums start off the track, which are quickly joined by an equally distorted two chord frenetic buzz guitar attack that leaves one breathless in the first 15 seconds! The frenetically sung verse is accompanied by a throbbing bass that just shakes the fucking house. Sleazy. The high pitched insistent vocals are playful and have an almost Devoesque influence.

The absolutely mental guitar solo ramps up the noise and helps brings the track to its short close. Its 2.50 minutes of unbridled fun and 100 mph seat-of-your-pants chaotic scuzzy rock pop. The band are absolutely ripe for sweaty clubs and festival tents at the moment and would have bodies flying left, right and centre. Listen to Johnny Kills now.