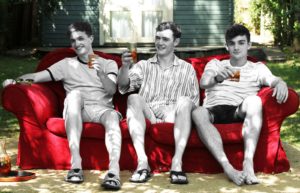 Leaving nothing to chance and riding a remarkable wave of very warranted success, Brighton via London trio Johnny Kills release the third in a series of what they term “Super Sick Summer Singles”.

After the success of debut single Lets Talk About Me (here) and the lackadaisical follow-up My Shirt Guy Is High (here) Johnny Kills present yet another stupidly good slice of grunge/surf/punk/pop that according to lead singer Tim “is about committing an earth-shattering faux pas that you have to accept you can’t just style out of”. Intriguing.

Nice grungy guitar chord structure and immediate vocals start the track. Drums join in and it leads into a gloriously chunky as fuck distorted bass heavy vocal less chorus. The loud quiet loud is repeated and takes up the rest of the track and leads to the bitter end with its balls to the wall bass throb and added strangulated guitar.

At times they sound like (good) Weezer and even Pixies. Johnny Kills are growing and maturing their sound right before our very ears, yet they are leaving none of the playfulness we’ve grown to love behind. This is more good stuff from this (so far) faultless band.

End Game was produced by Alex Greaves (Seeing Hands, Avalanche Party, Colour of Spring) at The Nave studio in Leeds, and mastered by Pete Maher. It is being self-released via Johnny’s Killer Records on September 8th.

26 October – The Finsbury, London (Part of Blogtober Festival for We Close Tonight)