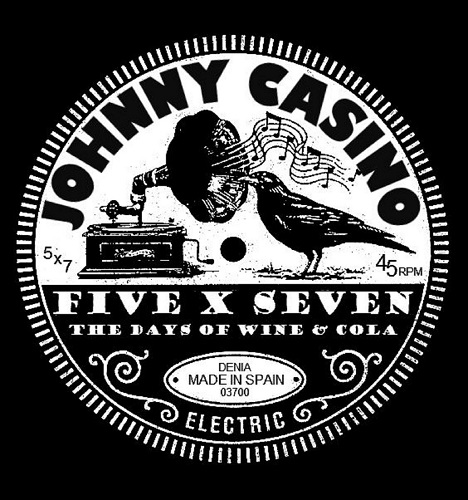 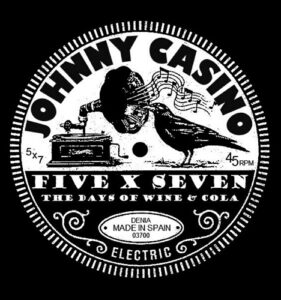 Johnny Casino: 5×7 The Days Of Wine And Cola

FOLC Records compile five seven-inch singles of Australian via-souther Spain singer Johnny Casino, each containing a new Casino track and a cover of some classic bands that have influenced him.

Days of wine and cola, the heady brew of calimocho that seeps from the Spanish streets on warm nights, through the rock ‘n’ roll bars and out into the night. It’s the perfect title for a performer who has embraced the life and love of Spain, a singer adopted by the country and who brings his Americana-fused acoustic-driven psych to the masses. Johnny Casino, the one-man purveyor of such beautiful crafted gems returns with a great set of new songs and cover versions, each showcasing his gift for drawing you in as the sun sets over dying fire embers on a beach somewhere in a foreign land.

This set kicks off with the wonderful Another Girl, recalling The Coral at their finest in its blend of Love-indebted driving psych, complete with a great winding solo that creeps serpentine-like from the speakers. It sets the tone for a great collection, beautifully put together by FOLC Records. It’s this style that he retains throughout many of the originals songs on the set. The Sound Of Lies keeps with that drifting Americana vibe as his backing band provides the perfect vehicle for him to work his magic over, the song including a subtly nod to Mercury Rev in the lyrics of holes dug by little moles.

He kicks things up a bit on the fantastic Never Should Have Gambled and even manages to drop in a soul-garage vibe on I Still Don’t Know, finishing up with a song that recalls the recent work of Reigning Sound. The final original, Moving On Down The Line, is a masterclass in boogie rock ‘n’ roll. And then there are the cover versions, each a choice cut on which he pays homage to his influences while maintaining his own style. The CD, included in the set, also features the song Love Over Fear, a summoning of Roky Erikson’s solo work in its purest form and the perfect distillation of all he does.

Of course, we get some Love with a great version of My Flash On You, a wonderfully wandering cover of Rodriguez’s Like Janis, a top RnB on his version of The Animals I’m Crying and a beautiful rendition of Lee Hazelwood’s I Move Around. But, special mention must surely go to his version of the Elevators’ Reverberation on which he delves deep into that desert-psych sound and draws all the pent up energy from it.

This set is a must for anyone already familiar with Johnny Casino and the perfect place to start for newcomers.