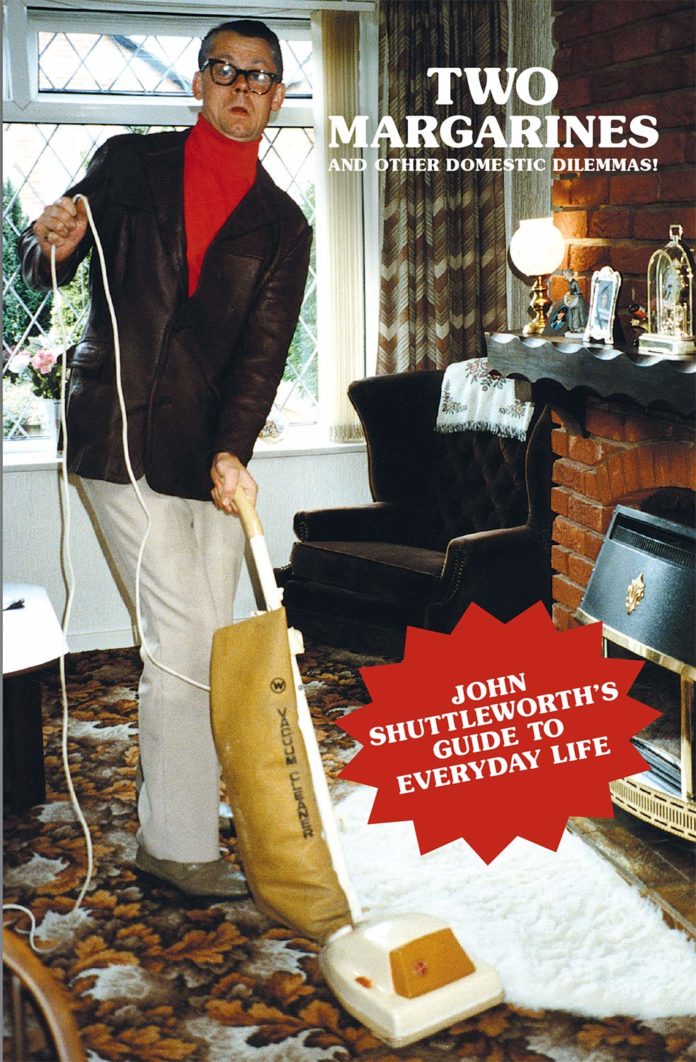 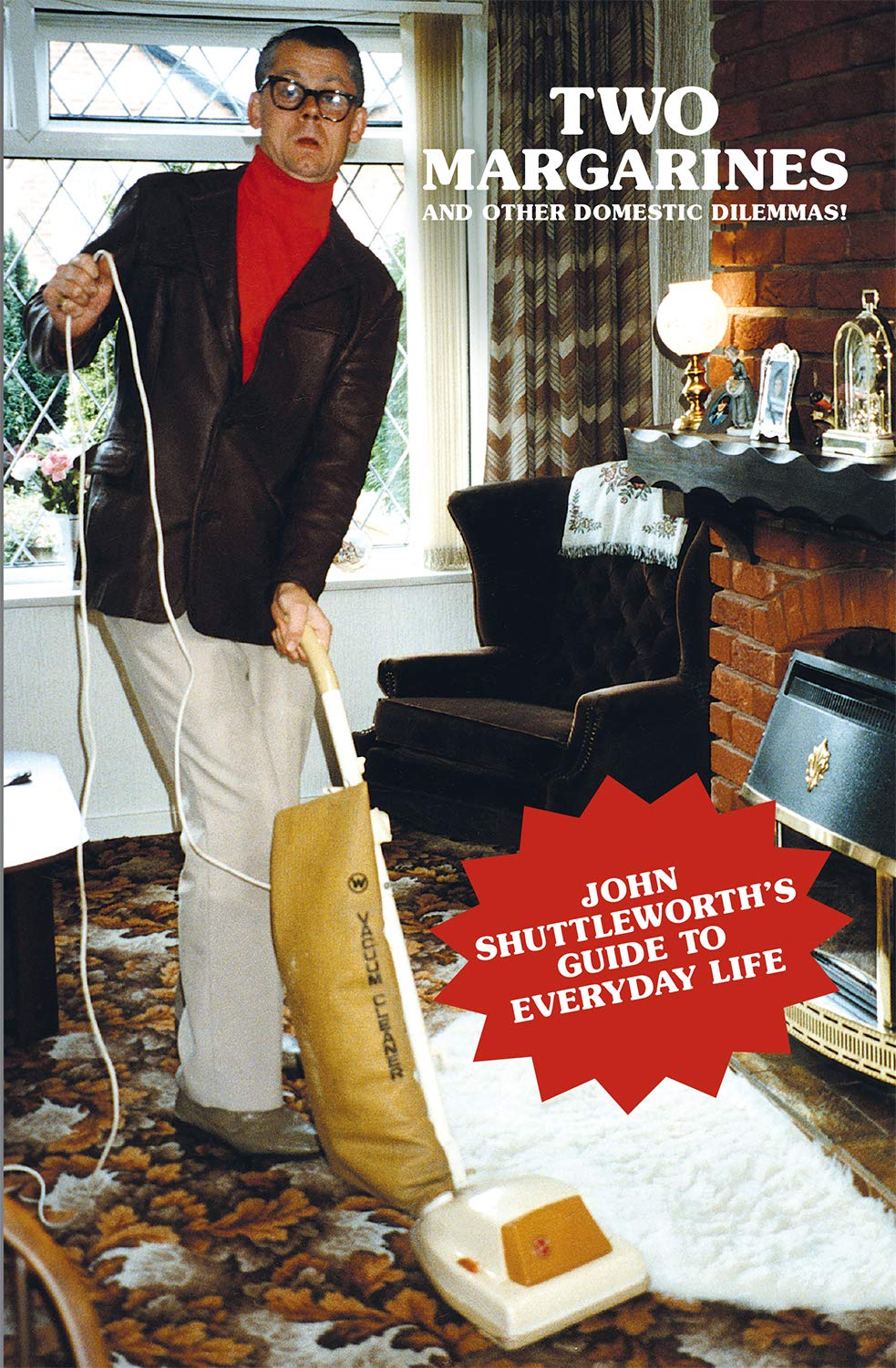 John Shuttleworth (Graham Fellows, also Jilted John) offers his own unique guide towards a smooth passage through life, with help (or otherwise) on hand from next door neighbour and sole agent Ken Worthington and wife Mary….Ian Canty sheepishly tidies up with his yellow brush/blue dustpan combo

People say that the little things in life are most important. Looking at it from a different angle, that just gives some added pressure in the turbulent times we live in these days to get these domestic issues spot on. One seemingly innocuous move can result in days of misery for you and your immediate family and friends. We all walk this tightrope every single day, so it’s timely that John Shuttleworth, versatile singer and organist, has put his deep thoughts on the subject of these daytime quandaries into book form with this Two Margarines tome. By taking us step by step through his day he offers sound advice on each of the problems that may beset a household, counselling common sense solutions to each in swift order. Often he employs songs from his plentiful back catalogue to illuminate these subjects further.

Or that’s what he intends anyway. By his own admission, Mr Shuttleworth tends to get side-tracked quite easily and sometimes is as baffled as you are on how to solve a particular home life enigma. Help is on hand though, if help is the correct word, in the form of next-door neighbour and sole agent Ken Worthington and his wife Mary, who tends to view John’s behaviour as more just an added annoyance to deal with. Other characters, like Mary’s friend and colleague Joan Chitty (ex-custard station dinner lady, now lunch queue disciplinarian) and John’s grown up children Darren and Karen, either make fleeting appearances or are mentioned when relevant to the domestic puzzle being examined. Of course his trusty Austin Ambassador is gassed up and ready to go as well.

Is eating out better than home cooking? Is Pestio (sic) really mould in a jar? Is one cup of tea ever enough? All these questions and many more are answered and the genius of John’s songs come to life on the written page. In between him trying to instruct us towards a better, healthier life he also inadvertently gets caught in a compromising situation with Joan (not that he actually notices himself), ruins Ken’s salad in an impromptu water fight, offers a detailed description of how to repair a mug tree and explains just why being shown to your seat by a waiter in a restaurant is a food hygiene nightmare.

This is a world where the early morning adjustment of the curtains is of paramount importance, the two differing needs of John and Mary at that time have to be taken into consideration and given equal weight so a perfect compromise can be reached. In addition, health and safety nightmare Ken Worthington in his Cuban heels and afro is a mere stones’ throw away (not that John would ever encourage that kind of behaviour) to create mayhem and demand John turn his book into a “bonkbuster” to help shift units. A normal day in the Shuttleworth household is marked by a trip to the supermarket fraught with demanding questions like the whether to use a self-service checkout or not, the joys of owning a fleece instead of a cagoule and of course the two margarines conundrum of the book’s title. With these intangibles all playing a part you start to get a feel of the myriad of situations that can emerge to confront Mr S during the daily grind.

I loved this book, you really feel the character come through the pages, almost as strongly as an audio recording in fact. It really is a bit like John is reading to you. I would say though that you do need to have some idea about John Shuttleworth beforehand otherwise you run the risk of having no idea what is going on, to begin with at least. Armed with that knowledge though, the world of the Shuttleworths come sharply into focus and the gentle humour is teased out of the characters’ interactions and situations expertly. John Shuttleworth has something a lot of comedy creations lack in 2020, real warmth and an empathy for the lot of an ordinary joe obsessing over the minor issues, something we all can be guilty of from time to time.

Though the Shuttleworths live in their own, self-created world there is enough reality allowed to intrude to give one pause for thought. Radio has proved the perfect medium for them in the past, but they adapt well here into the book format – Two Margarines captures the essence of John and his insurmountable struggles through the small details of life in all his comic glory.