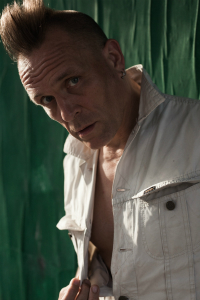 John is an award winning journalist, veteran of Melody Maker and Select to name but a couple, and boss of Louder than War. In a 30 year music writing career, John was the first to write about bands such as Stone Roses and Nirvana and has several best-selling music books to his name, including his Stone Roses and Charlatans’ biographies, Manchester – So Much to Answer for and Punk Rock – an Oral History. He constantly tours the world with Goldblade and The Membranes playing gigs or doing spoken word and speaking at music conferences, when he’s not popping up on late night music programmes on BBC4.

“In 2010 we decided that there was a space for a new type of website that didn’t follow the preconceived rules of music.
We were bored of genres and the conventional history of music; we liked so much music and we wanted to communicate it.
We didn’t realise how many people agreed with us and the site has become one of the fastest growing, award winning music websites in the UK”
https://louderthanwar.com

FAYE FIFE/THE REZILLOS
Sheilagh Hynde/Faye Fife was unarguably the first Punk pin-up girl in the UK, fronting Rezillos since 1976. First UK band signed to Sire Records, resulted in them supporting The Ramones on their 1977 UK tour. Rumour has it, The Ramones wanted them off the tour because they were too good. Sheilagh followed the acting route for a while, but is again fronting the revamped Rezillos all over the world

RACHEL AND GAYE BELL/THE TWINSETS
Sisters Rachel and Gaye got The Twinsets together in the late 70’s, showing a love of 60’s girl groups like The Shangri Las and The Ronettes with a bit of punky bite, and offering up a bit of glam in these otherwise austere times. A ray of sunshine of which John Peel took note, offering them several sessions

CARLA EATON AND SITA PIERACCINI/ TEEN CANTEEN
Teen Canteen are one of the loveliest groups to emerge from Scotland/UK in a long time. Beautiful melodies sung in a very Scottish accent, a female Arab Strap in that respect, but not so negative. Just beautiful summery sounds, done well! They pay tribute to the greatest Girl bands of our time, wonderfully

SADIE MARREN/ THE TRAMA DOLLS
Sadie has been a constant on the Edinburgh club and culture scene for nigh on 30 years. He oversees and basically singlehandedly writes the wonderful Quotidien Times Pop-Culture blogsite, and describes himself as ‘the bastard child of Iggy Pop and Debbie Harry’. This quote has become realistically realised in his most recent incarnation as vocalist with the wonderful Trama Dolls, who made their live debut earlier this year as support to Kid Congo and the Pink Monkey Birds.

LAURA KIDD/SHE MAKES WAR
Multi-instrumentalist Laura Kidd, or as she is better known- She Makes War brings something different to the table altogether. Her style is eclectic and you never quite know what to expect as she glides through her set. There is a disarming fragility to these songs, tempered with something of an edge. Last seen on BBC4 playing bass with ex- Slits’ Viv Albertine on girl’s punk night!
www.shemakeswar.com

DOUGLAS McINTYRE/CREEPING BENT/THE SEXUAL OBJECTS
Douglas started out in Article 58 in the late 70’s, supporting Josef K and loving The Scars. Since then he has been involved a multitude of bands, The Wild Angels, The Secret Goldfish, Subway Sect and currently, The Sexual Objects. He now props up Lloyd Cole as part of The Leopards, Lloyd’s current backing band. As well as lecturing on Music in Glasgow, he has run the fantastic label, Creeping Bent for 20 years
https://thequietus.com/articles/14316-creeping-bent-20th-anniversary

NEIL COOPER
Neil, a fantastic cultural observer, and contributor to many online sites, is Theatrical/music contributor to The Glasgow Herald, The List amongst others. His own blog The Coffee Table Notes gives you all you need to know and more. A Liverpool lad, but deserves honorary Scotsman status for putting up with us for so long!
https://coffeetablenotes.blogspot.co.uk/

MICHAEL PEDERSON/KEVIN WILIAMSON
Michael and Kevin, both published Scottish Poets, curate the most fantastic Scottish/UK multi-media night that has happened in years. Their vision is breaking boundaries, and have recently taken the night to New York, whilst inviting Warhol acolytes like Gerard Malanga to Glasgow!

ROY MOLLER
Three albums in, Roy has been described as ‘Music’s Best Kept Secret’ by Marc Riley on Radio 6 Music. Roy is also doing his Lou Reed musical, My Week beats your Year’ during the Fringe. Check it out!

Just supported Babyshambles and Paul Weller, and more to come, The Merrylees are an incredible young combo – Arthur Lee from Love would have loved them. Produced by The Coral’s Bill Ryder Jones, and Richard Hawley, this lot are going somewhere!