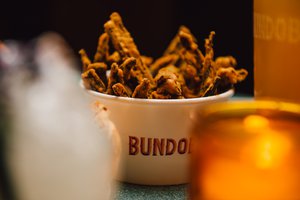 LTW boss, broadcaster, musician and journalist John Robb has been vegan of 10 years and vegetarian for over 35 years, Shaun Ryder is a Pescatarian Happy Monday who loves vegan food and it trying his best to go vegan – he will talk about his battle in his usual brilliant style in conversation with Robb.

The talk will be at a vegan feast from their favourite restaurant Bundobust. John will host a lively conversation with Shaun as they talk about their love of plant-based food, Manchester, and Shaun’s struggles to become a vegan.

An incredible plant-based Indian banquet by the award-winning Bundobust paired with vegan beers from the new Bundobust Brewing Co., in the presence of two inimitable personalities, soundtracked by a GREAT Manchester playlist… this promises to be a celebration of veganism, Manchester style.

There will also be vegan food at the festival which is part of Manchester Food and Drink Festival.