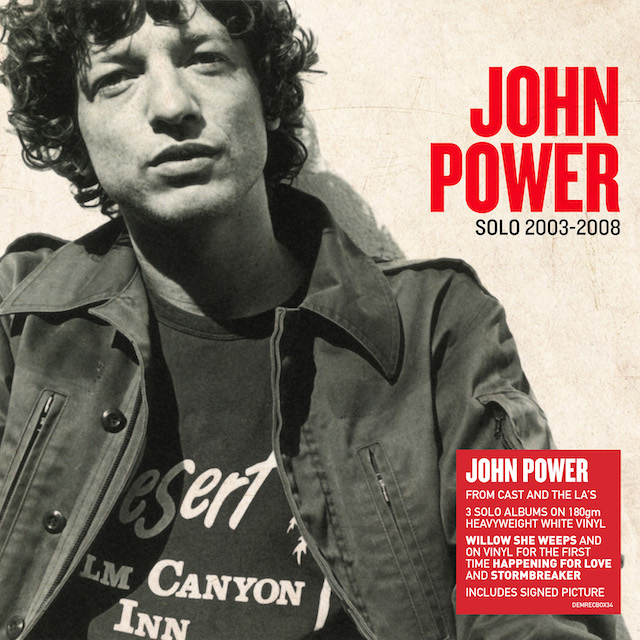 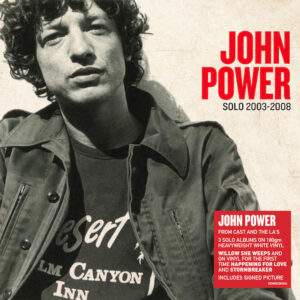 John Power’s three solo album have been given a well-deserved dusting down with a lavishly presented white vinyl box set released via Demon Records. Matt Mead surveys the release for Louder Than War.

The distinctive scouse vocal tones of John have been a recognizable trait since he first burst into light as the young bouncy blond haired bass player with Liverpool’s famed pop guitar perfectionists The La’s. With a seemingly never-ending supply of pop hits of his own making John then branched out with his own four piece Cast, with monumental success in and around the Britpop scene of the mid-90s.

After Cast split in 2001 Polydor offered John the chance to record as a solo artist but at the time he’d had enough of the whole business so after a break it wasn’t until 2003 that debut Happening For Love saw the light of day. Producer for the album was John Leckie, whose body of work includes working with Magazine, The Fall and The Stone Roses as well as Cast.

Comprising the last remnants of the upbeat Cast sound with a smattering of 60s Beatles and Kinks acoustic based pop, the sort of thing we became accustomed to on Revolver and The Village Green Society. Similar work has received more notable praise by the likes of Paul Weller and Noel Gallagher, the peak tracks here include tracks Small Farm, Mariner and the title track.

Stripped back Willow She Weeps released in October 2006 is a completely different experience compared to Happening For Love. Peaceful country-blues, catchy acoustic pop with a touch of Americana successfully mixed across the set. Early period of Bob Dylan and Donovan are evoked in and around this collection, John sings with an almost broken, lamenting voice, hearts will become torn with another listen to this lost beauty.

Lastly 2008 release Stormbreaker is different in concept to the previous releases. A full John Power Band play deep down and dirty Delta blues, in a similar vein to Edgar Jones’s The Stairs concocted with Captain Beefheart’s Safe As Milk period. Harmonising with a grittier voice than on the sunshine pop of the Britpop material, the likes of John Lee Hooker would nod their approval behind darkened shades at this effort.

A re-evaluation of these vital Northern sounds welcomes back into the spotlight long players that might not be on everyone’s immediate radar but can now be easily accessed. Taking a leaf out of the same book as read by John Mayall and Paul Butterfield, John Powers solo work is championed prosperously with this freshly revised collection.

The box set can be purchased from the Demon Music Group website.