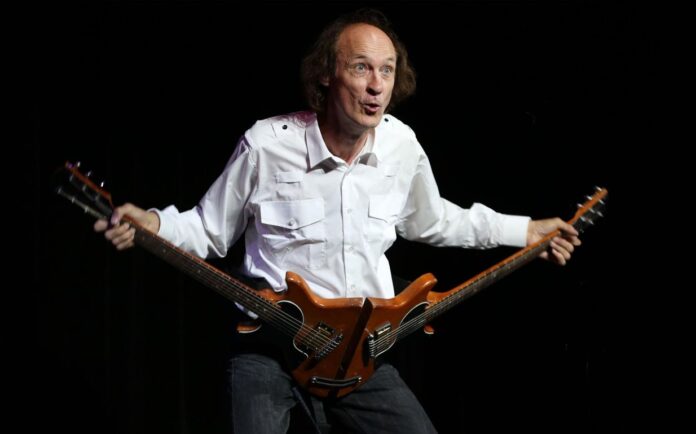 Madcap maverick, John Otway will play his 5000th show at The Shepherd’s Bush Empire, London on April 2nd, 2022. In a career spanning more than 50 years. Nigel Carr had a chat with John who filled him in on how he got into the business and why his career seemed to continually falter which led to the film Rock n Roll’s Greatest Failure which is available on Netflix.

Otway fell in love with music at a very early age; “I was nine when I decided that’s what I wanted to do. I was singing Lonnie Donegan songs in the school playground. I remember what music was like before The Beatles, and when they came along it really was a revolution”. Otway became a Beatles fan who he preferred over The Stones as their music, to him sounded a bit ‘samey’, whereas he considered The Beatles to be more experimental, especially the first two albums; “I remember feeling at the time feeling that I’d never heard anything like this”.

Otway, who is 70 later this year, played his first gig at his old high school, The Grange in Aylesbury, in June 1970. Teaming up with ‘Wild’ Willy Barrett in January 1972, he played Aylesbury college leading to a partnership that has lasted to this day; “The plan was that both me and Willy would do a couple of songs and then we would play some together”. Otway’s performance cleared the hall so, after Willy’s spot had refilled it, he was not allowed back on stage. So, the duo split up before they even got together!

The original sound was more west coast/blues-oriented as is evidenced on Gypsy, their first single; “I’ve always been quite eclectic, and my band will vouch for this. I’m not a great musician. What I started doing early on was having an idea for the melody line and the lyrics and sing them A capella. Every line has its own melody attached to it, like the way you talk, you know”. Otway allowed the musicians around him to infuse the songs with their own musicality, their structures, and ways of arranging the songs, and of course, every musician was different.

The band performed as two guitarists which was unusual at the time, in that most duos either had a tom-tom player, like Tyrannosaurus Rex, or a drummer, like Medicine Head. Otway explained how this was borne out of the folk club tradition; “Willy is an astonishing multi-instrumentalist, and a lot of his stuff is steeped in American bluegrass and blues, so very much a folk club player, and because I could never get gigs, the one thing I could do was turn up to folk clubs and do two numbers, until I got banned! Willy had a folk club and that whole thing about Gypsy and the fortune teller telling me I’d work with a blonde-haired musician was absolutely true!”.

The duo, still together, had a surprise hit in 1977 with the off-the-wall Really Free, as they were pulled into the whole pub rock/punk crossover, which also enveloped the likes of Ian Dury and Dr Feelgood. John Explained “I think it had more to do with what was happening in the music press. They had started really looking at what was happening on the pub rock scene, and between 1970 and 1977 we had built up a good following on that circuit, and a lot of the emerging bands like the Jam and the Clash did a lot of early gigs in pubs. I had a club called Friars, (in Aylesbury) and Bowie played there, it was a very good club, and a guy called Peter Frame (of Peter Frame’s Family Trees books fame) started running a local music paper and we had a lot of interest from the national press”.

The single peaked at number 29 in the charts and gave Otway a thirst for success. They followed it up with the song DK50-80, with them and label Polydor hyping the record by only playing towns where they knew chart sample shops were situated. The single entered at number 45. 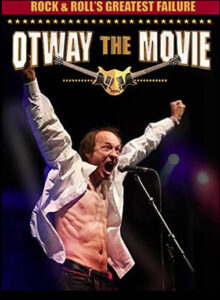 This period is covered in depth in the Otway film Rock and Roll’s Greatest Failure, with the musician having a series of well documented stabs at success. This included rigging a BBC poll to get Beware of The Flowers voted as the 7th greatest lyric of all time, hosting a voting party at the Royal Albert Hall to decide on his next single, then getting 900 fans into Abbey Rd to record the song, Bunsen Burner, before hyping the record into the charts by releasing multiple variants. The track peaked at number 9, his biggest hit to date.

Self-deprecating and humble, John has never let his lack of consistent success get in the way; “Basically, I’m absolutely crap at being a failure. I failed at that – I can’t even be a failure! I was a dustman for part of my life and the threat of going back on the bins has always spurred me on” 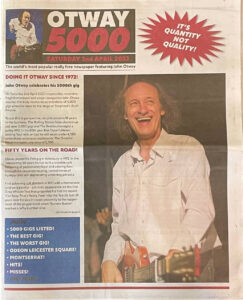 John, who acted in TV’s Forever Green; “I basically had two lines an episode”, in the late ‘80’s has a cameo role in Mike Bennett’s film Vegan Vampires from Zorg; Otway; “it’s so long since I did any acting, I just didn’t know whether I could still learn lines. Mike sent me a script…so I wanted to see if I could still act, and I discovered I never could”.

All of John Otway’s shows are featured in a newspaper he has put together from years of diaries to celebrate his ‘success’. There are details of pretty much every show going back to 1970, from that very first show at his high school.

In John’s words; “Self belief can get you a long way even if you don’t have any talent”. Humble to the last, John has entertained us now for best part of past 50 years. A hugely engaging and entertaining character, long may it continue.

The 5000th show on April 2 will be split into two segments, John Otway & Wild Willy Barrett and the John Otway & The Big Band.

The 5000th show at the Shepherd’s Bush Empire is on April 2nd and the last few tickets are available here: John Otway – Buy Tickets

Words/Interview by Nigel Carr. More writing by Nigel on Louder Than War can be found in his Author’s archive. You can find Nigel on Twitter and Facebook Listen to Nigel’s show on Louder Than War Radio – Wednesdays 9-11 pm! Mike Bennett presents Freak Party on Louder Than War Thursdays at 7 pm which will feature his interview with John Otway!! here and on the free Apps:  https://s2.radio.co/sab795a38d/listen