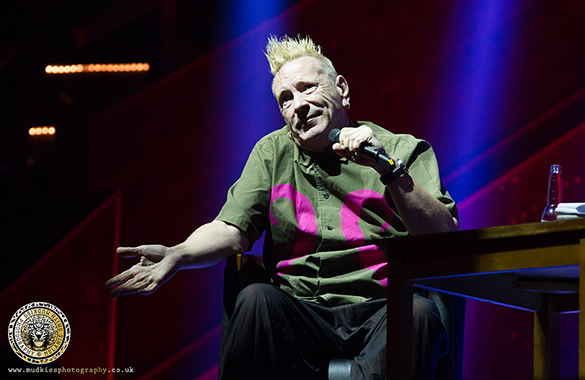 Former Hacienda DJ & writer Dave Haslam welcomes John Lydon to the sold out historic Albert Hall in Manchester for his latest “Close Up” series of on stage conversations.  Lydon also chose to launch his autobiography ‘Anger is An Energy: My Life Uncensored’ at the same time.

The doors opened at 6.30am and the book was on sale from the very first. Of course I bought one, would be rude not to, and I got it signed – but more about that later.

Dave opened proceedings by saying that it was an emotional day for him, he spoke about how all the doors opened musically for his generation with the Sex Pistols, “we owe a lot to John for that”.  Of the Manchester broadcaster Tony Wilson, who was instrumental in the Pistol’s on TV, he said:

“….if he was here today he would say fuck off Dave I’m doing the interview”.

Of course, we all know the story about the Bolton students Howard Devoto and Peter Shelley of the Buzzcocks who brought the Pistols to Manchester to play at the Lesser Free Trade Hall, which is now a hotel across the road. This was the venue for two early Sex Pistol gigs in 1976, which everyone swore they were at (and David Nolan wrote a super book about.) Dave said:

It was to be a night of reminiscence, brimming with humour by the bucket load, sarcasm, some serious banter and as always  all done in Lydon’s own inimitable style.

Dave introduced Lydon by saying that all the smart Alec’s had said to ask him about Countrylife butter, but that he couldn’t be defined by that. Calling him onto the stage by saying:

“…he is a great lyricist, a great songwriter, an amazing performer, and a legend, John Lydon.”

There was a standing ovation as Rambo (his long time companion and minder) and John appear. He bangs his fist to his chest and looks somewhat overwhelmed and emotional by it all. He bows to the crowd and says:

As he sits down he says touchingly: 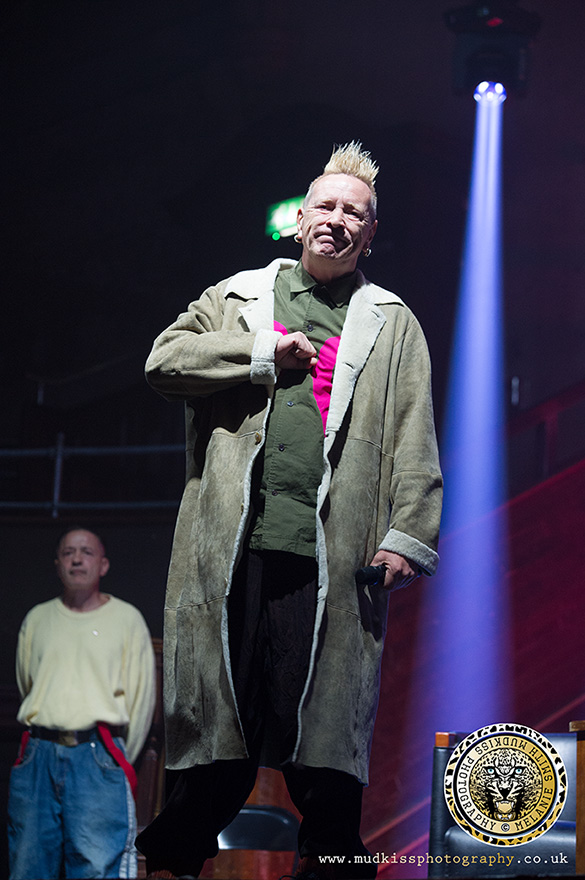 He started off by making fun of Vivienne Westwood:

“…is Vivienne Westwood in the house? Heard she had invented punk recently”.

Dave quickly changed the subject around by saying he wanted to talk about football, a bit of banter ensued about football with the crowd calling out. He’s been an Arsenal season holder since he was four years old.

He’s clearly not a Wenga fan though.

Dave then asked him some questions about Malcolm McLaren, about what he saw in John, to which he commented:

“He saw the better person, the person he could have been, but the fact is, he lacked talent”.

It would appear he didn’t much care for McLaren. He went on to talk about the Sex Pistols and how he had been given the opportunity to sing with them and how much he loved them all.

“Even though one of them is as big as a butter mountain,” he joked.

Dave asked him when he looked back at old footage did he recognise that person:

“I know him very well, that was the young me”.

He went on to say how he had to grow up really quickly as he’d had problems in his life leading up to joining. This led on to Lydon saying that this country needed shaking up again, this received massive applause.

“I’m looking out for the yoof”.

Lydon talked about how, as a child, he was a shy, and at the age of seven he had meningitis, which took him 4 years to recover from, spending a great deal of time in hospital.  He didn’t know the people taking him out of hospital were his parents as he had lost his memory; he had to start to try to trust them all over again. Obviously this was a traumatic period for Lydon, and it had a major effect on him.  He was deeply thankful to the National Health Service for the support, and feels for young children who are ill.  Lyndon’s brother recently contracted throat cancer. 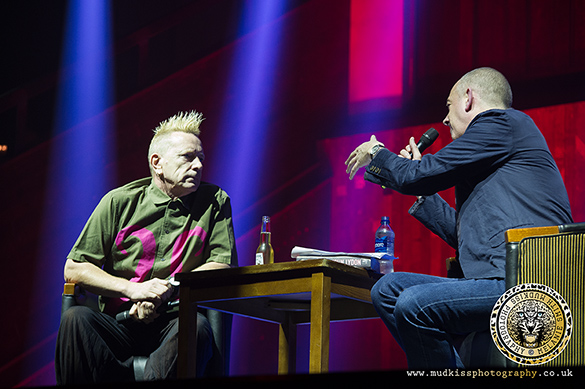 The local library, it seems, saved him, reading all the books. He is a huge supporter of our libraries. He was taught nothing from the Education system, he was self-educated and words became his weapons, he gave a shout out to poet Ted Hughes. He said he had very good teachers,

“….they were called authors”.

He chats about bringing up Ari Up’s two teenage boys, as she struggled to cope with them. He reveals they were…

“…cheeky, naughty boys so they lived with us”.

He says that Nora his wife, is gorgeous, and he loves her…

“…let’s hope we get married soon”.

He has a big thing about family, and he also looked after his brothers growing up, as his Mother was always ill. The importance of family…

“…never steal from your own”.

He stated that he is still working class, and wears it like a badge of honour.

The subject of Sid is raised, he tells of Sid’s birthday present, how he was given packets of Heroin and two syringes by his mum.

“Once you mess with the dark side you’re fucked”.

He remarked that Sid couldn’t play Bass, even Lemmy tried to teach him, but he said he was tuneless.

“Lemmy is a perfect human being, we loved him”.

In retrospect, John says Sid just couldn’t cope with fame and being in a band., and it was unfair.

“He became an instant victim, unstoppable, his ego took over”.

The audience laughed when John described Sid as once being a Leo Sayer fan with a perm.

“I miss him, miss his humour, he was so brilliant at mimicking”.

He reckoned that he didn’t kill Nancy, as

“…he didn’t have that inner viciousness”.

He was, however, on a path of self-destruction, but John felt he resented him as he thought he was standing in the way of superstardom. He quite clearly misses Sid…

“We will meet in punk heaven one day”.

The talk of drugs and John’s involvement on the Anarchy tour where he took heroin, the heartbreakers had come over, and that was their idea of fun. Jerry Nolan, the drummer, got his spoon out and melted his brown slush up and he allowed him to inject it.

“I fucking hated it”.

From his early hospital experience he had a deep hatred of needles.

John relished engaging with the audience, he thrives off the eye-to-eye contact.

“I can see the honesty and the heart and soul in ya and that gives me the energy to do what I do.”

He jokes with the audience at various points, but he is also serious too, with a couple of politically charged comments about the government and the need to vote.

He talks about his love of dance music, and George Clinton…

“…open up your mind and your heart will follow”.

When he was banned from the BBC for talking about Jimmy Saville. He spoke about a couple of interviews he had done recently where they didn’t want the truth, they wanted generic answers, not an opinion.

He gave his perspective on California and what life is like…

He loves the warm environment, good for his health.

The next stage is opened up to the audience for questions … and many shout out random questions, but one of the best comes from a guy talking about the time John appeared on a radio show where he played some really great music, and not what people expected him to play either.

I think he could easily go on to have ‘An audience with John Lydon show’, he has it all. Intelligence, sharp as a razor, deadpan humour, sarky retorts and a real love of his fellow people. He was genuinely touched by the warm vibes he received from tonight’s audience, and he told me later (after I’d queued for 4 hours to meet him) that he was a very emotional person and he was quite taken aback by it all.

The book signing began straight after in the ground floor bar, the lines of people snaked around the room in their hundreds, and each person was given Lydon’s personal time, it wasn’t just a case of a quick book scrawl; they shared laughs, hugs, kisses, body autographs (one guy had his tattoo booked for the next morning) and personal stories. We also had a personal sing along with Lydon on some PiL tracks which were playing throughout the wait, he was encouraging people to sing along with him. In the end he got away long after 2am, after being there signing since 9pm. He was pretty intoxicated by the early hours, but in good spirits.

A brilliant night, which will be remembered for quite some time. Thanks to Dave Haslam for putting this unique piece of theatre on for the people of Manchester (although many people travelled far and wide to be there) the road it seems has risen again for this 58-year-old punk John Lydon.

John Lydon – ‘Anger is an Energy: My Life Uncensored’ autobiography was published October 9th 2014, via Simon & Schuster. Full details about it, including how to order, can be found on John’s website: johnlydon.com or here:

He also has a handful more book signings lined up:

John Lydon can be liked on Facebook and news about him can be found on twitter here: @lydonofficial.

All words and photos by Melanie Smith. You can find more of Melanie’s photography at her website: mudkissphotography.co.uk.