John Lydon’s abrasive media approach has got him into trouble after the singer was accused of sexism after an interview on Australian TV.

Whilst being interviewed by Carrie Bickmore on Channel Ten’s The Project programme the singer went on a  tirade after being interrupted and asked his opinion on Margaret Thatcher.
“Hey mrs, shut up!” he said. “Whoever you are shut up, shut up, shut up. Now listen, when a man is talking do not interrupt … stop it you sound like one of them dreadful loud birds I don’t like … You’ve gotta learn what manners and respect is; I’m Johnny ‘fucking’ Rotten and I’m telling you a truth,”

In a statement issued to NME, Lydon denied that the comments were sexist. “I am the enemies of governments and institutions, certainly not women. I’ve been married to one for 30 years. We love each other,” he said.

In another interview Lydon says those now celebrating Margaret Thatcher’s death are ‘loathsome adding that, ‘I’m not going to dance on her grave.’
He also said: ‘I was her enemy in her life but I will not be her enemy in her death.’ 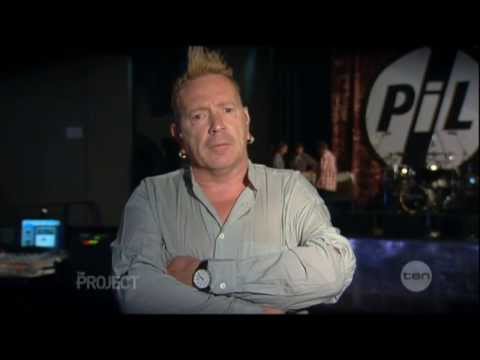