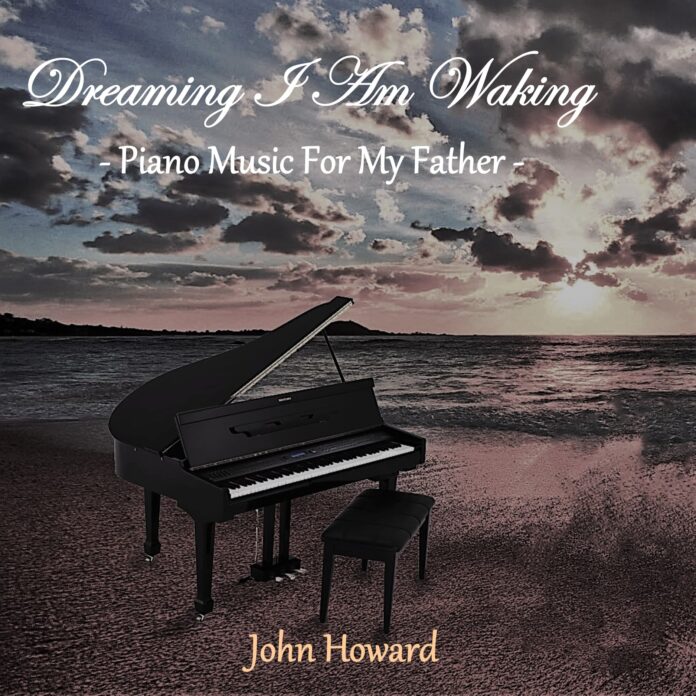 John Howard: Dreaming I Am Waking 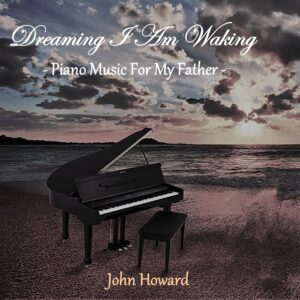 Subtitled Piano Music For My Father, this is John Howard’s first album of mainly instrumental piano pieces, with vocals only featuring on Pour The Cup. Among the thirteen offerings that make up the LP are tracks from the 2016 EP Four Piano Pieces, which have all been remastered by Ian Button. Ian Canty hears pure emotion made clear without (m)any words…

In recent years the very talented John Howard has been a veritable hive of activity, putting out new top quality material at what is an almost frantic pace. Three fine LPs, a recent Best Of collection, singles and odds and ends have all been issued over the past 36 months or so.

Dreaming I Am Waking is a different proposition than most of John’s recent work though, but is one not totally without precedent. It isn’t going too far to say that this LP fleshes out the ideas from John’s Four Piano Pieces EP from a few years back (for a review of that record and Across The Door Sill album, click here). Indeed, the tracks from that EP are presented here in a remastered form and somehow they fit into the concept of the LP seamlessly.

As one might suspect from the subtitle to this record, the album is a conceptual work that looks at John’s father and his influence on the young Mr Howard. His dad’s piano playing directly inspired John to take up piano in the first place, which is something we should all be jolly grateful for. John himself certainly is as, through the thirteen compositions, this album forms a truly touching tribute to his father.

First Steps opens up Dreaming I Am Waking by sweeping in like a fresh winter’s morning. There’s a kind of timeless quality here that is captivating. It makes for a sparkling introduction and is immediately followed by the deeply reflective and grandly delivered Distances. A sedate and wistful Contemplating comes into earshot next, hovering tantalisingly in the air at its conclusion, before Moving introduces itself with a brightness and lightness to its step. Then Aloft In The Arms Of Papa ties right into the concept of the album and shines with an appealing, sunny nostalgia.

The album’s one vocal track Pour The Cup (For Sleep To Claim You) comes next. A ringing motif is set in place, but it quickly stops dead when John’s heavy-echoed voice is deployed to good effect, skilfully accomplishing a sound that is intended to emulate the vastness of cathedrals and his father’s role as part of a church choir. Next comes The Emergence Of Understanding, which is a beauty of gliding keys over contrasting low notes. The lyrical Theme For A Lost Love is played with a heart-breaking passion and an unwavering precision. Crossing’s constant movement and lilting counterpoint are both busy and joyful to hear, ending with a long fade-out which helps to emphasise the effect.

Emerging is shorter in duration but flows along with an eternal, melancholic feel and the following item Empty Rooms has John’s piano depicting a mood of regret and loss as eloquently as most songs crowded with words. Time & Tide opens with a flourish, before settling itself to a gentle but moving pace that smartly echoes the passing of the years. The finale of Growing, which is a reprise of First Steps, brings the listener full circle. It is a lovely, warm way to end an album full of happiness and sadness, love and loss, hope and despair, all somehow conveyed through the piano. The overall effect made me feel that bit better for having heard, or more accurately having experienced, Dreaming I Am Waking.

What music you wish to listen to on any given day is to a certain extent influenced by mood and environment. I heard Dreaming I Am Waking first on a chilly but sunny late summer morning and it fit the overall feeling of the moment like a glove, keying right into my reflective frame of mind. That the album is as far from rock & roll as one might get is by no means a bad thing and in John’s hands it expertly shaped into something very special. Certainly not many people could pull off a piano instrumental collection with as much grace, feeling and beauty.

But that being said this long-player also supplies a gentle but riveting experience, taking the listener through a whole cycle of human emotion. For the most part, this is depicted without words too and that is a rare and precious thing. This is something a bit different, but it is also a work of great sensitivity, a real labour of love that marks out an emotional map with clarity, humility and real warmth.

Dreaming I Am Waking is available on iTunes here and Amazon Digital here.