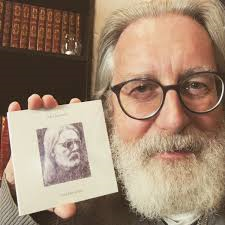 You Are The Cosmos

Brand new album by John Howard, his 16th and the follow-up to 2016’s Across The Door. This is also his first record since his very well-received autobiography Crowded With Life…..LTW’s Ian Canty charts the progress of one of Britain’s best kept secrets……

John Howard first made a mark in 1975 with his debut album Kid In A Big World, after spending the early part of the decade slogging round the Folk clubs and university halls of the UK. Seeing the potential in the young man’s songs and also his striking and unique Post-Glam image (something that would only really be picked up on around 20 years later by the likes of Suede and Pulp), CBS signed Howard and gave the LP a big push with a press launch at the Purcell Rooms on the South Bank. The record revealed Howard to be a talented songsmith with a keen viewpoint and no little insight. However, progress was stymied by Radio One taking some of its trademark bizarre decisions in banning single Goodbye Suzie and the follow-up Family Man. Without the push of a hit 45, the LP did not achieve the success it should have.

Undeterred John recorded a further two albums while contracted to CBS, but the label decided against releasing them for some reason. The pair, Technicolour Biography and Can You Hear Me OK? only saw the light of day on RPM in 2004 and 2005 respectively. A couple of singles did creep out at the time, but this was no doubt a huge setback. To his credit Howard persevered, releasing some more 7″ single sides into the 1980s (including a pair I Can Breathe Again and Don’t Shine Your Light produced by Trevor Horn). With these records struggling to make an impact he chose instead to pursue a successful career in A&R in the 80s and 90s. During this time he only recorded one album, The Pros And Cons Of Passion, which was a week away from release on the Carlton label when the imprint folded. Luck was one thing John Howard wasn’t overly blessed with, early on at least.

The 2003 reissue of his first LP introduced Howard’s work to a whole new set of fans and the favourable reaction provided the impetus for him to begin recording anew. The first album to emerge was The Dangerous Hours in 2005 and since then he has put out many LPs of new material, while also finally getting his shelved records out there. This “second-wind” was very welcome and on the whole extremely well-received. It was heartening to see an artist’s rebirth and the good reception has continued. Here we have John’s 16th album, full of new songs, sounds and ideas to cherish.

It is simply a stunning record that is beautifully arranged, with songs that hit home and easily beguile. Aside from the sharp wordplay, wonderful tunes quickly embedding themselves in one’s subconscious. The LP begins with the quirky Psych-Folk feel of So Here I Go, which has a stately pace and dreamy hummed coda. Remains seems to be addressing time as a great healer “let the years wash the pain away” and the musical setting is quite beautiful, if “Perfect Pop” exists it is right here. Pre-Dawn follows in dramatic and stylish fashion, sad piano Pop excellence. John sets out his stall early on, yes strings and a wide range of instrumentation are often called upon, but he knows instinctively when it is necessary to cut down to a sparser backing when the flow of the song calls for it.

Three excellent songs in he goes for the knockout punch in Becoming, which is just a breath-taking piece of storytelling. It is a love song, but one which acknowledges the pressures that time and life put on any long term relationship and the people involved. Just when you thing it is going to be another very good song about an unravelling love affair with familiarity dulling emotions, John turns it round and into a triumph for the human spirit over time, comfort and happiness is retrieved and the love is saved, concluding “we were lucky”. I’m sorry, I think I’ve something in my eye….

Keep Going Angel could be seen as the hopeful sequel to Becoming, the line “keep looking ahead” could be John Howard’s mantra as he refuses to rest on his considerably laurels. There’s some lovely accordion on this tune which adds to the intoxicating atmosphere portrayed. The title track follows, this song is a charming evocation of childhood and family life, with a music box-style opening and the touching line “I love you in my breath” lingering in the memory. Fresh, ornate chamber Pop is on the menu for Idiot Days, starting out as a comical song of regret, but easing into more conciliatory self-awareness of one’s limitations. A very human touch is on display, with all foibles and failings that entails, but also the good bits too. Of course is comes complete with a lovely melody with some great almost choral vocals.

The singing is again stellar allied to a cool string arrangement on We Are and the lyrical and poetic Jean Genet Just Imagined follows in fine style. Set closer Long Since is another real beauty, with a simpler musical setting coming to a fitting climax, with again perfectly judged and light vocals. It is full of classic lines like “your whisper brushed my day” – it is brilliant in a few space of words John conjures an image so perfectly. The passing of time, but the remaining of passion. The album ends and you just want to go back to the start and play it again…

Showing no little amount of ambition, Cut The Wire is coming from the same sort of general direction as the Beach Boys/Brian Wilson, the later Beatles recordings and even ELO, but crucially John adds his own voice and musical inspiration. Also those others, in spite of their obvious strengths, belong in the past whereas this album is brand spanking new in the now. In a fair and just world a new John Howard LP would be the cause of celebration and immediately sent to the top of the charts. It really is that damn good. In lieu of that occurring though, perhaps we at LTW can “get hoisting” and take this record to the top of our hearts instead. I certainly will. A towering achievement and a dream of an album.