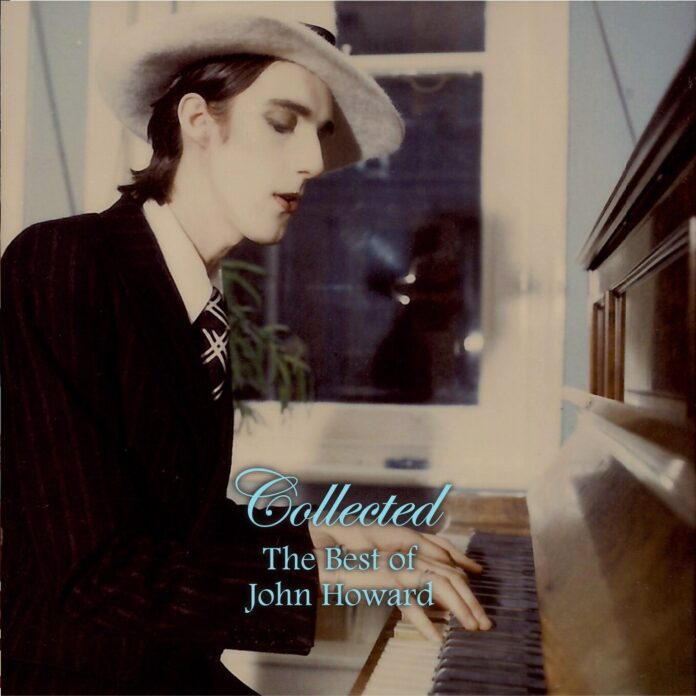 First commercially issued career overview/best of from singer songwriter John Howard, reaching right back to early demos I’ll Feel What I Feel and 3 Years, which both predated his debut single Goodbye Susie from 1974. The set comes right up to date with selections from his recent albums and the 2020 single In The Stillbeat Of A Silent Day. This collection has been by put together by Edward Rogers and mastered by The Night Mail’s Ian Button. Ian Canty collects his thoughts…

John Howard’s remarkable 21st century renaissance has brought into sharp focus the fact that he’s never been subject to a properly released career best of set. With a wealth of great material to choose from over the years, it is rather startling this was the case. But now we have a 2CD entitled Collected, that seeks to put things right.

Emerging through the folk clubs, John was eventually noticed by CBS Records as a promising artist and offered the young man a recording contract. During this time he developed a startlingly cool image to go along with his musical abilities and was presented by promotion and advertising as a kind of post-glam space balladeer. After the breakthrough to mainstream success didn’t arrive, mostly due to blanket radio bans on his singles, he spent a long time away from performing, instead involved himself in a successful second career in A&R. The hugely positive reaction to the reissue of the Kid In A Big World album in 2005 helped to reignite his muse and since then he has produced a host of critically acclaimed works.

Fittingly, Collected begins with that first single for CBS, Goodbye Susie. A lovely, evocative sound that announced this newcomer with a confidence and poise like few others, it was unfortunately subject to one of those BBC radio bans mentioned above, which meant that the disc’s clear hit potential was sadly never realised. But even despite that, the song is a fantastic achievement, painting a vivid, truly alive picture in sound and words.

The jaunty sound of The Dilemma Of A Homosapien taken from the As I Was Saying LP follows, an elegantly crafted and performed effort. Dear Glitterheart, the closing track from the LP The Dangerous Hours, then finds John in full flow, vocally he’s superb and that is something Collected proves has endured right through the years. What a voice. 1976 single I Got My Lady is a bit more of an oddity, placing a kind of buried reggae beat under a stately pop arrangement. It’s great fun and then we come to the title track from the Can You Hear Me Ok? collection, which is a lovely pop nugget that deserved to be pumping out of radios all over the country in 1970s. Alas it wasn’t to be, but it is still a terrific sound.

Oh Dad, (Look What You Done) from the shelved 70s selection Technicolour Biography is playful and bright, then it is time for Kid In A Big World from his debut album, a touching and beautiful realised piece of orchestrated pop. There’s three decades between this and the heart-warming These Fifty Years from 2005, but it follows on seamlessly. The race back and forth between the years that Collected undertakes doesn’t seem important, there’s a consistency here which makes it all appear logical, nothing jars. Take Up Your Partners (Finale), the dramatic climax to Technicolour Biography, is a piano-based offering that gallops along with abundant vim.

Life Is Never What We Want It To Be also comes from As I was Saying and is full of humour and a hard-worn knowledge of life’s pitfalls. A queasy synth, piano and country guitar part embellish the introduction of Frightened Now, before the tune develops coolly and Be Not So Fearful, a cover of a Bill Fay song, lyrically provides a natural counterpoint. This highlights the taste and sense that has been applied on Collected in putting together the running order. Next from 2006’s Same Bed, Different Dreams comes Stardust Falling (For Jobriath), a sparkling, livewire ode to a fallen glam fellow traveller.

The My Beautiful Days single from 2007 is the just the type of voice and piano piece that John does so well, but one that assumes the guise of a witty, self-deprecating pep talk and Family Man, a comic social satire, comes complete with what sounds very like the chimes of a xylophone, though I could be wrong. Both portray the dry wit and good old common sense that is a Howard trademark. Believe Me Richard chugs along merrily in a sumptuous style. It worked the neat trick of making me believe in the characters involved in relatively few words, the story just ringing true and the scene set “while The Beatles sing love is all you need”. The subtly evoked, soaring piano ballad Loving You follows in grand style.

Small Town, Big Adventures and Technicolour Biography represent a sort of early tour de force at the end of the first disc of Collected, two tracks from John’s CBS days which helped to set out his stall as a writer to be reckoned with. Small Town, Big Adventures comes across as cool as ice post glam pop/rock, busy and bewitching strange. As a contrast Technicolour Biography is heavenly sounding and emotional, a sharply observed genuine showstopper.

Disc two of Collected commences with 3 Years, recording way back in 1973 at Chappell Studios in London. This is a pretty and lively folk pop number with some good and quite prominent guitar picking. We flip forward 12 months for Maybe Some Day In Miami from the debut album, a mix of chamber music and big production theatre songs being expertly tapped into here. Injuries Sustained In Surviving, from last year’s magnificent To The Left Of The Moon’s Reflection LP, follows with a real joy de vivre, it is stunning.

Then we have Favourite Chair, adorned with lovely light psych touches and emanating from 2011 and afterwards Something Good follows in a more reflective mood. A 1996 recording of Neil (You Can Depend On Me) belies its stack of 90s pop rock production ticks, presenting an upbeat pop love song. I Can Breathe Again, a disco beat from 1978 and one of the earliest production jobs completed by Trevor Horn, shows John could easily fit in with a dance format. Next comes London Loves You, simply the greatest space glam ballad Suede never wrote.

Becoming owes its origin to the fine Cut The Wire album, a real tug at the heart strings with a lovely, positive ending and Staying At Home Kinda Guy possesses has an almost power pop jangly rush. There’s plenty of variety here, but the true unifying force is simply great tunes. Roddy Frame’s Small World was cut by John in preparation for the version with The Night Mail and for a demo has an unusually lush, double-tracked vocal and dreamy charm.

Again having a more soul feel about it (I’m The) Talk Of The Town breezes in and there is more of a “band” style here too. Another Day brings things almost right up to date, coming from last year’s To The Left Of The Moon’s Reflection long player like Injuries Sustained In Surviving, with the deep church organ sound setting the scene. The bright and snappy Comic Strip again shows John’s eye for finding humour in the oddest places and Snow is also short and sweet, shimmering gracefully into focus.

You’re Mine Tonight brings baroque pop and folk rock sounds together and from there makes it into some of John’s own. Though Collected is by its very nature a look back through John Howard’s back pages, the In The Stillbeat Of A Silent Day single from 2020 shows that at present he’s on the form of his life – it would take someone with a rock-hard heart not to warm to this. There is a real fresh feel to the live take of Deadly Nightshade, again a bit of a Motown dance stomp to this and I’ll Feel What I Feel from Front Room Fables, a collection of home demos from the early 1970s, takes us back to the start in a sense and ends Collected with spirit and guile. It was clear from the off this boy would go far!

Collected – The Best Of John Howard is the perfect starting point if you are new to his music and if you are not, it works to fill in a few gaps. Any way round you want to put it, unique, elegant and listenable pop music as full of insight into life’s mysteries as this don’t come along very often, so this is definitely a compilation that warrants attention. These not a dud to be heard. Treat yourself to hearing to one of the very best practitioners of the songwriting and performing crafts here.

The two CDs of this set are filled pithy logic sense, sometimes brutally frank self-analysis, great melodies that lodge themselves deep in the synapses and of course that superb, one of a kind voice. One of the dangers in pop music is that it can appear fake and puerile in the wrong hands, with simplistic “moon, June” type rhyming lyrics and no grounding in the real world. In sharp contrast John’s compositions instantly come bounding into life, the recognition factor is high and we don’t always get happy endings (but we do occasionally, just like in life). One of the best “best ofs” you are ever likely to hear, Collected is made to be treasured.