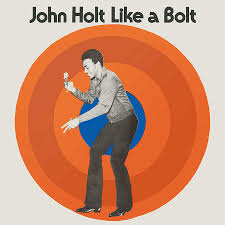 Reissue of John Holt’s 1973 album with 10 bonus tracks which adds up to all the singer’s output with Duke Reid’s Treasure Isle label. Ian Canty hears the man that was soon to buck the downward trend of the early 70s and return reggae back to the UK charts after the wilderness years.

By the time of the release of Like A Bolt in 1973, John Holt was a 14-year veteran on the Jamaican music scene. Beginning his career in 1959 by entering talent contests at the age of 12, he cut his first solo disc four years later in the Forever I’ll Stay single for Leslie Kong. After that he joined with Bob Andy, Garth aka Tyrone Evans and Junior Menz to form the hugely successful singing group the Paragons. Bob Andy had left to go solo by 1966 and Howard Barrett, a childhood friend of Holt, replaced Menz to give perhaps the definitive line-up of the band. After switching to Duke Reid’s Treasure Isle label in 1968, they became one of the best selling outfits of the rocksteady era, with hits including The Tide Is High (which of course was later on a number one for Blondie) and Man Next Door (also recorded by the Slits).

The Paragons split in 1970, but even before then, Holt had started to make waves as a soloist. He had been a featured songwriter for the band and his smooth, cool voice stood out even in the very talent-heavy Paragons. Eventually (and more than a touch ironically, given that Holt was one of reggae’s top tunesmiths) he would finally hit the UK charts with his version of Kris Kristofferson’s Help Me Make It Through The Night, which reached number 6 in 1974. This came from the smooth-as-silk covers album, 1000 Volts Of Holt, another big seller, but a world away from the mostly self-penned Like A Bolt LP, which is what we have here.

With John’s star in the ascendency, even in the rocky post-skinhead years, it seemed prudent for Duke Reid to provide a round-up of his work in 1973. This collection reached back to 1968 and from there contained offerings from each of the following years, before coming right up to date with a couple of brand-new recordings. As such, it features a lot of his best early work, from the lilting and touching of Tonight to Ali Baba, which had a rhythm that was irresistible to early dub pioneers (witness King Tubby’s I Trim The Barber and the Aggrovators’ Dub Barber). This is far earthier than his work circa 1000 Volts Of Holt, but much more moving and essential in my opinion. Ali Baba is a total Reggae classic, cut just at the time the beat speeded up and the cryptic lyrics give it something extra. Among the bonuses, we get a nice 12″ version, which features much echo and some cool dub techniques.

This album showed that Holt had journeyed effortlessly from rocksteady, through the skinhead era and on to the more commercial and bright 70s sound, barely missing a beat on the way. It’s a testament to Holt’s belief in his direction that an album recorded piecemeal over the course of five years hangs together so well. I See Your Face is everything you could want from a Reggae love song – excellent vocal delivery as you would expect, conveying the emotions in a very real way and with sympathetic backing music that you could easily dance to as well. Though he wrote the majority of the material on the album proper, he does cover Nat King Cole’s Time And The River in superb fashion and also jousts ably with Leroy Sibbles on set closer, Let’s Build Our Dreams.

The bonus material rounds up the recordings Holt cut for Treasure Isle and Working Kind (a US country hit for Waylon Jennings) is fine prototype lovers rock. John’s unhurried style was a major influence on that sound, which wasn’t to come to prominence for many years after this recording. All My Life is an excellent piece of boss reggae and Darling I Love You’s dynamic backing adds another layer to a very soulful love song. Of course we also have Stealing Stealing aka Thief In The Night, which was another early barnburner for Holt. All in all, an amazingly consistent collection.

After Holt’s brief chart success, he continued to be popular in Jamaica, right up to and including the dancehall era, with tracks like Police In Helicopter and Up Camp Park. He recorded well-received albums well into the 21st century. His conversion to Rastafarianism in the early 70s in a way helped him maintain his success, as he updated his approach to each coming trend, always keeping his cool and steady singing at the forefront, whatever the musical backing. When he passed away in 2014, a giant of reggae music was lost.

John Holt’s calm and measured vocal style was an easy fit to the more commercial material and presentation of 1000 Volts Of Holt, but for my money he’s far better served by the contents of this 1973 LP and the appended bonus tracks here. He really didn’t need the added window dressing to appeal, and riding the tougher rhythms brought out the best in him. A classic voice backed by simple but hugely effective musical landscape, Like A Bolt is a gem of original reggae, as infectious, danceable and satisfying as virtually anyone else you would care to name. A total treat for the ears and the feet.