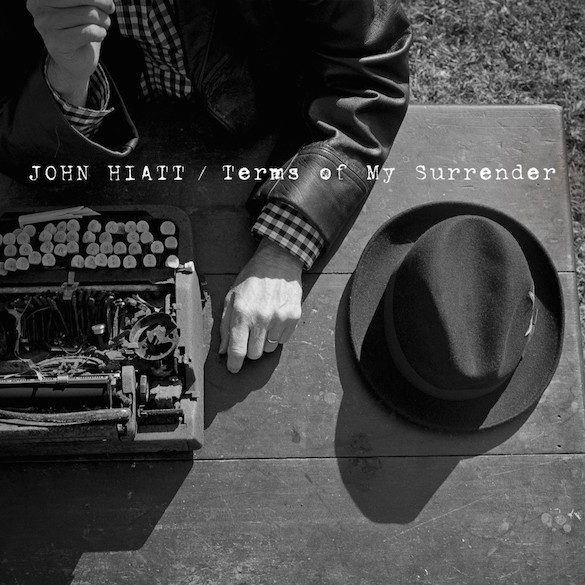 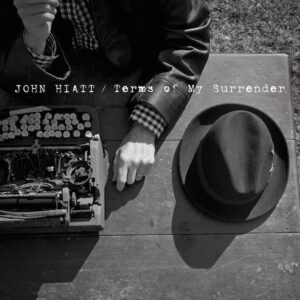 Available from 15th Of July

Another year, another John Hiatt album …. Maybe that’s exaggerating things a little but the man has managed to put out 6 records in less than 10 years while maintaining high quality standards. Louder Than War’s Craig Chaligne reviews.

Terms of My Surrender is probably his bluesiest effort since 2001’s Crossing Muddy Waters and it has the hard task of following one his best albums Mystic Pinball. The mood is a rather mellow one and numerous songs see Hiatt ruminating on friendships (Long Time Coming), love (Marlene) and religion (Face God). It’s far from being his most optimistic album and the sense of humour that usually permeates his songwriting (think of Wintertime Blues on his 2005 album Master Of Disaster) is absent from this set.

The album was recorded with his touring band The Combo in a small studio in Nashville and most of the songs were cut in a couple of takes with the band playing live in the studio. Hiatt’s voice and acoustic guitar take centre stage and the tone is very bluesy. The blues has always been a core component of Hiatt’s style but while he usually manages to couple that with melody, here everything gets a bit formulaic (Nothing I Love being a perfect example of that) and the hooks are few and far between. It’s not a bad record by all means because Hiatt is such a good songwriter that even a slightly off albums has good songs on it and that “Terms Of My Surrender” is no exception. It’s just when you finish listening no song has really grabbed your attention. You keep waiting for something of the calibre of Slow Turning or Master of Disaster to come up but apart from a slight spark on Baby’s Gonna Kick nothing happens. A perfectly listenable album but not one of his best especially when compared to all the records he has put out since the turn of the millennium.