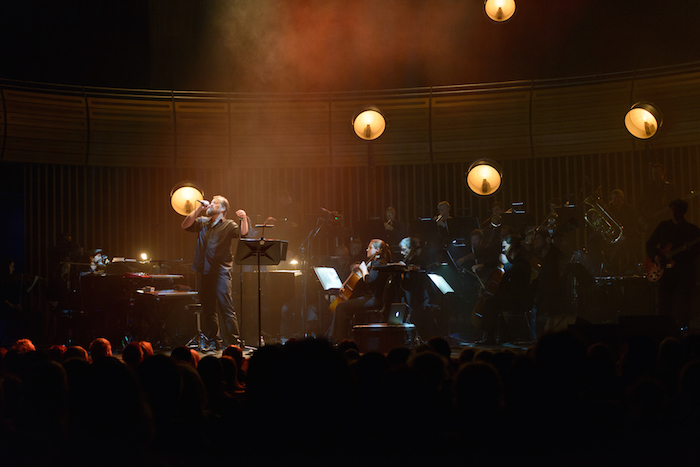 The crowds rush in for this early start as we’re ushered in quickly taking our seats. The Royal Northern Sinfonia is already in place, as John Grant and his band emerge on to the stage. Put simply the crowd erupts before a note has been played or sung, there is a lot of love in the room this evening for this RNS hometown show.

Opening with You Don’t Have To, the orchestra’s power is immediate and it takes John Grant’s work to a completely new level. We’re under no illusion this evening is going to be something unbelievably special, the density that RNS bring to John’s work is so exciting. Its Easier sees John taking to his piano and beginning alone yet the layers are built and it becomes this beautiful wall of sound.

The crowd erupts as John announces Marz, there’s a beautiful cinematic feel to this track. Amplified by the addition of the orchestra, the sheer beauty of the track stands out a mile as John croons, “I want to go to Marz…”. He is overcome with emotion at times becoming a pseudo conductor as he gestures his enthusiasm and excitement to those who surround him.

Up to now the set is faultless. However, the set is about to take a rather dramatic turn, the opening chords of Pale Green Ghosts provoke an electric crowd reaction. What follows is nothing short of mind blowing though, a phenomenal rendition of the title track of John’s second album. The orchestra come alive as the room is lit from all sides by these dancing green lights.

All three floors are lit in some way, yet there is not a pair of eyes who are not fixated on stage, as this track takes on a life of its own. The standing ovation they receive at the end is thoroughly deserved. This tour also sees John testing out new material and one which grabs our attention with its huge sound is Black Blizzard yet another song with a huge cinematic feel to it.

The orchestra again coming alive, this time though John’s huge vocal sits firmly atop the track and there’s a real power and purpose to the track. This perhaps isn’t as evident in some other tracks but it takes us completely by surprise, the darker undertones of  the synth stabs and the orchestral layers fuse together to create something truly magnificent.

Greatest Motherfucker prompts a huge crowd sing-along, arguably our favourite track of the night. For a man who’s faced so many problems this song must be the greatest form of therapy, a firm two fingers up to everyone yet he dedicates it to everyone in this evening’s crowd.

Closing out the set with a duo of his most well known tracks, Queen of Denmark provokes a similar reaction to Pale Green Ghosts. The song takes on a life of its own the stabs of guitar the huge beams of light and the wall of sound created by RNS is unbelievable, its breathtaking to watch.

Glacier couldn’t be a more fitting end to this beautiful set which has seen us laugh, brought close to tears and generally overwhelmed and overjoyed by John Grant’s presence and command of the venue.

The encore features the brilliant That’s the Good News, which sees John strut around the stage singing in his faux German accent. It doesn’t fail to raise a smile on everyone’s face. Ending on a high with Caramel, there is yet one final standing ovation from this truly appreciative crowd.

This evening has been an absolute triumph and there aren’t the superlatives to commend these musicians. The fact that there were four standing ovations throughout the evening is a testament to this and we leave in complete awe of John Grant and the RNS, a truly phenomenal show.