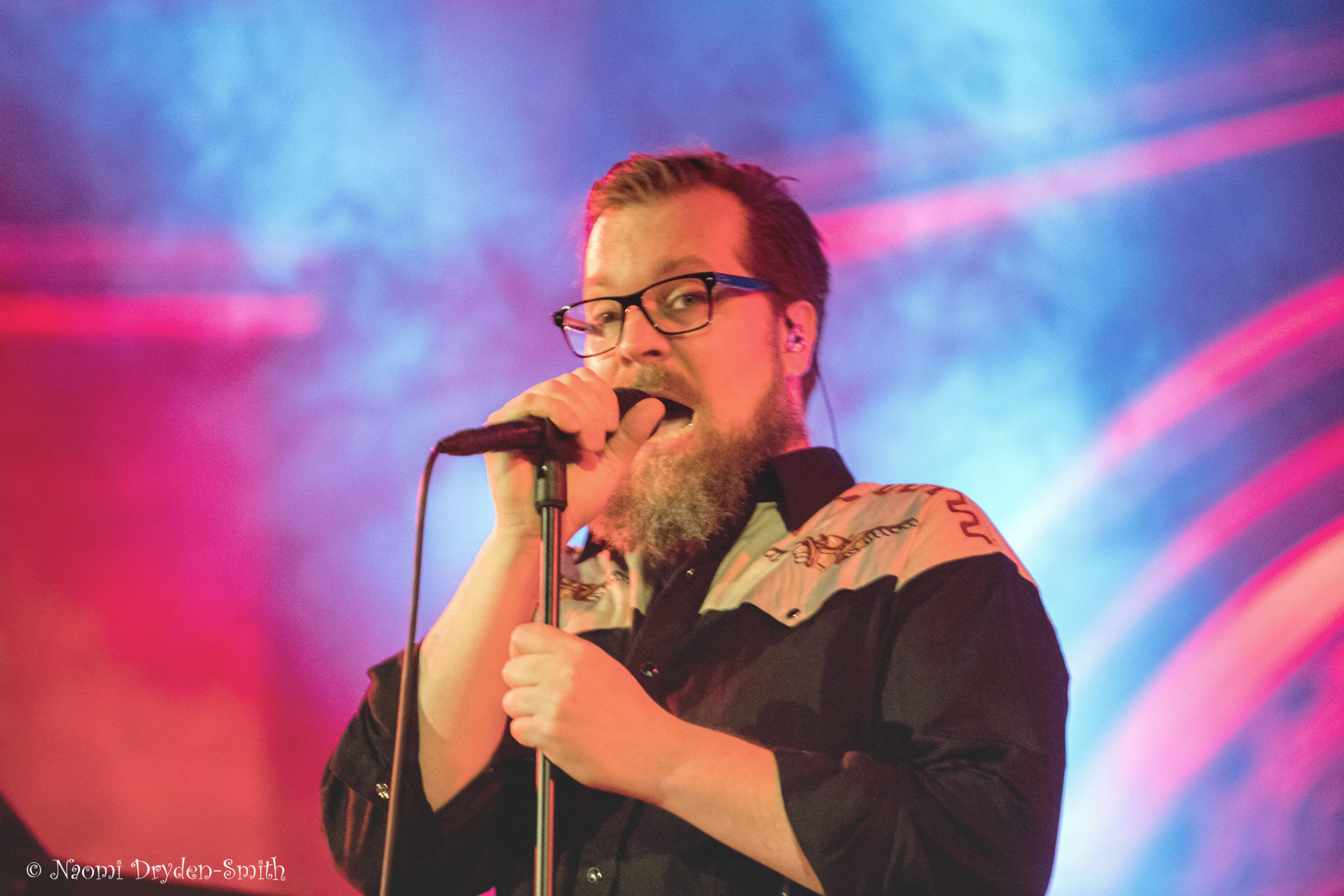 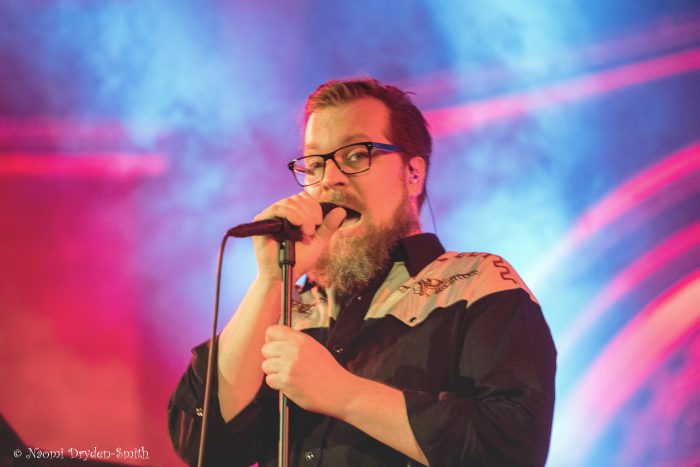 “A Kidney For Oleg”, a special and intimate charity gig headlined by John Grant with support from Satellites. Naomi Dryden-Smith went to check it out.

Tonight’s opener is Satellites, aka singer-songwriter Johnny Vic, a Londoner now living in Copenhagen. With three albums already under his belt, together with significant accolades from the likes of Rough Trade, this is a special performance for him. 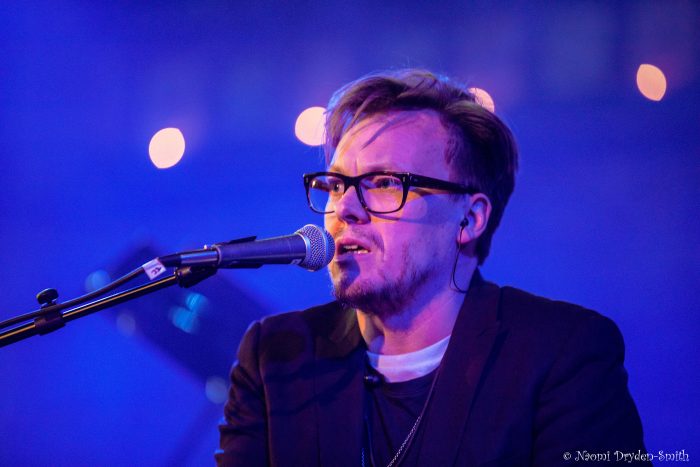 Sometimes supported by a band, and even a choir, but solo tonight, (aside from pre-recorded orchestrals here and there), Johnny treats us to a short set filled with songs from his critically acclaimed albums Satellites01 and Satellites04 (otherwise known as Glitch). The back-story to Satellites04 is that, whilst Johnny was in the middle of recording Satellites03 (due for release later this year), his mum was taken seriously ill. Satellites04 was written in a very short space of time, and reflects the agonising emotions of rushing a close relative to hospital and then waiting anxiously for news, not knowing if they are going to survive. The album is raw and intensely autobiographical, and the beautiful surrounds of Union Chapel provide a perfect backdrop for such emotionally charged songs, ranging from the angsty challenge of Unforgiven, with angry vocal and clashing notes, to the sheer desperation of Faith & I’s “You ask me to play God tonight, There is no one around, There would be no sound, And I love you enough…”. Anyone who has been in this position will recognise these impossible thoughts – and the challenges of revealing them publicly.

Johnny’s penultimate song, brand new We Forgot How To Love, has a classical, Tubular Bells feel about it, the pained “how have we arrived at this?” and haunting organ sound again framed by the stained glass windows of the Chapel. The set finishes with fan-pleaser Railway Line from Satellites01 – the repeated request “keep up with me, or let me run free…” starts simply and builds to such a crescendo of lush pre-recorded orchestra that it’s easy to forget he’s alone. It’s a convincing set by a talented guy who deserves a wider audience. 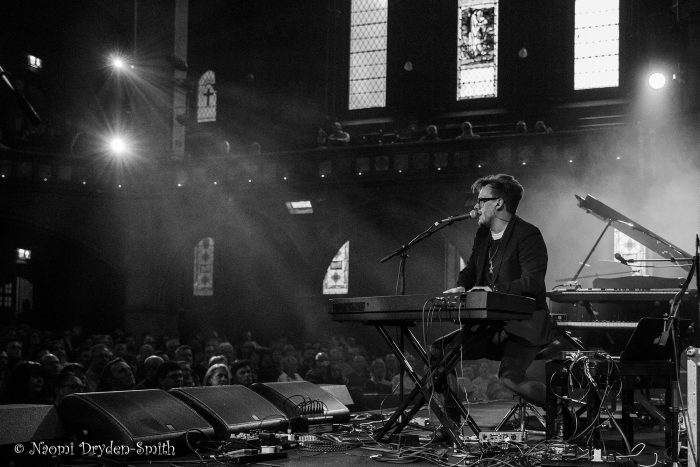 Brits nominee John Grant surprises anyone in the audience who covertly has their phone at the ready by announcing that official filming hasn’t been organised and requesting that people please record the show. (Presumably this takes all the fun out of it .) There’s a nice touch too where he records a message (speaking impressive Russian) and then turns the phone so that the audience can cheer loudly, and it lasts for ages.

He explains that Oleg was a soldier for the Red Army, who he met in West Germany when he had just started learning Russian. He was charismatic and handsome, and once John Grant had gone back to the States, they wrote to each other for three years. John Grant went to stay with Oleg’s family and hung out with his dad, reading Pushkin. Later on he got caught up with his life in the States and his issues with being afraid to talk about his sexuality, he says he was on a different planet. 25 years later, reconnecting with Oleg on Facebook, he discovered that Oleg had known about his sexuality all along, they had all known, nobody cared – and that all the stress had been for nothing. Oleg’s father died a few years ago after suffering after-effects from clearing up the Chernobyl mess – impossible to prove, however, and Oleg and his mother now live on barely any money. Oleg is now dying from kidney failure and the aim tonight is simply to help raise some money for him. It’s a wonderful thought. 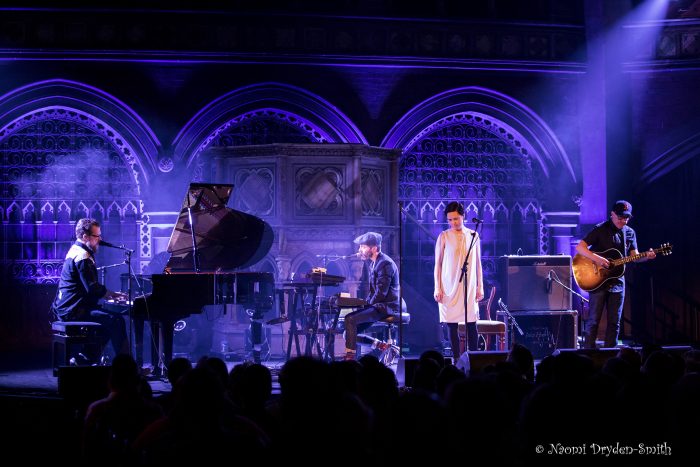 “Now here’s a song about the apocalypse – well, what else are we going to talk about?” pretty much sums up John Grant’s songbook. There are flashes of gorgeousness – the Carpenteresque I Wanna Go to Marz, with its list of his favourite childhood sweets set against a dreamy melody, and the acceptance and regret of Where Do Dreams Go To Die, both of which easily become earworms. These stand out against a tide of songs which it might be said blend a little into one, or at least a few – each comprising beautifully soft rock melodies, supporting angry or unhappy lyrics about topics ranging from nuclear bombs to cancer and global warming, and lost love. Many are the musical equivalent to sitting at the bar crying into whisky. On the whole, they are not sing-along songs – “Global warming encourages slack jawed trogladytes To leave their homes with guns and knives In search of bodily refreshments and some homicide” is a fairly stark opinion about the state of the world but not exactly morning shower-fayre. Some of his songs may also pose difficulties to anyone sensitive to long poetic streams of consciousness that don’t really rhyme, or words which are mispronounced in order to fit them into a stanza. Or songs without particular choruses. But there is artistry in the honesty of these songs, and the autobiographical content, alluding to his struggle to come to terms with his homosexuality or to his depression or substance abuse will strike a chord with anyone who has grappled with similar issues.

Ably accompanied by Chris Pemberton on piano, Petur Hallgrimsson on guitar and the beautiful voice of Mara Carlyle, Union Chapel is filled with John Grant’s rich baritone to the delight of his happy fans – the sentiment is positive, all of the musicians are here for free in support of this special fundraising. It’s a great night and everyone hopes very much that Oleg gets everything he needs.

All words and photos by Naomi Dryden-Smith. You can find more of Naomi’s work for Louder Than War here, and she tweets as @nomeshome Also on Facebook and Instagram. Naomi’s Photography portfolio can be found here