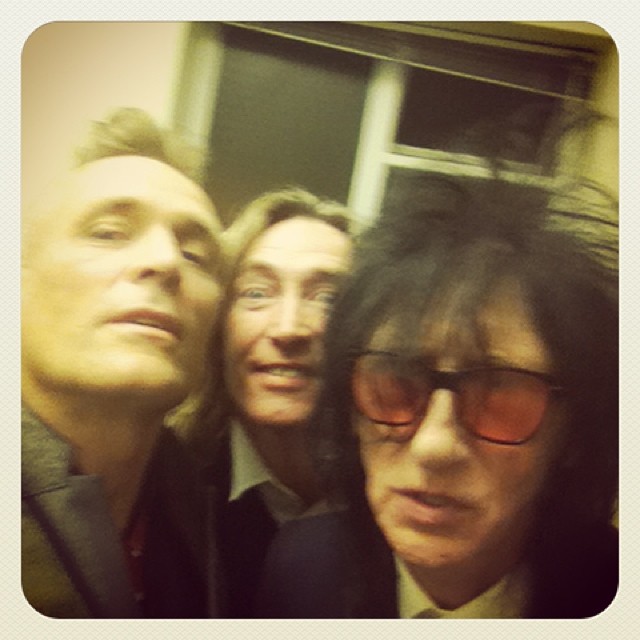 John Robb watches  a legend reborn and declares  ‘In the land of fools the jester is king and Cooper Clarke has reclaimed his crown.’

The sharpest man in showbiz is dressed in killer threads with a perfectly too small suit, a silk pocket hanky and snakeskin boots that hiss the evil hiss of the blues from their very soul as he zigzag wanders across the stage. With a mouthful of lyrical riffs and a bagful of poems John Cooper Clarke has suddenly burst back into the mainstream with that most old fashioned of things: talent.

It’s riveting stuff as the ever sharp dressed man with the Bob Dylan H bomb hair holds the big crowd enthralled with his razor sharp acid wit, his cutting comments and his brilliant way of slicing through the bullshit. He is, of course, also hilarious, you cry with laughter and you also marvel at his surrealism and his brilliance.

These days everyone is getting the joke and the so called ‘punk poet’ is on endless tour hypnotising people with his Salford score draw drawl.

It was only a few years ago I saw John Cooper Clarke playing to about 50 people in Leeds- he was still brilliant but treated like some sort of ghost from the punk rock wars- a relic of total genius cut adrift in the cruel and treacherous showbiz world that seemed to have no time for his brilliance any more. That was apart from the Arctic Monkeys who were on a one band campaign to resserect the great man and that added to the fact that he remeained totally brilliant has sent him off an a stunning comeback.

The handful of devotees that night in Leeds were enthralled by his set that was already morphing then into more a stand up show with machine gun poems read from scraps of paper pulled out of a plastic bag. Since then justice has prevailed and the Salford bard is now were he should be – a national treasure – albeit an abrasive and brilliant one.

When he stalks on stage after the effortlessly cool Johny Green- the former Clash tour manger and fund of endless great stories himself and Cooper Clarke’s on the road tour manager and confidante ( their in car travelling conversations must be worth a triple album on their own!)- intros him and the dragon enters in full flow.

He may be  a few decades in but Cooper Clarke has lost non of his edge and his show now is even almost structured- although as structured as stream of conciousness of the last of the beats is ever going to be. He rapiers through some great stories/jokes/observations with all kind of tangents and asides before working his way towards a poem which he rattles off at a hundred miles an hour before setting up the next missive.

We have said it over and over but Cooper Clarke should be our poet laureate- he has the common touch and the magic dust to make the mundane magical and the magical hilarious. He talks of his current home Essex- switches his accent to Essex man, then it’s back to Salford for lacerating comments on modern culture- he does the non rhyming limericks and ends with beasley street – it’s al;l brilliant and heady stuff.

Supping on his gin and tonic he is the lounge lizard with a fistful of stories and through all the dark wit and explosive wordplay there is a deep wisdom that tells many truths.

In the land of fools the jester is king and Cooper Clarke has reclaimed his crown.