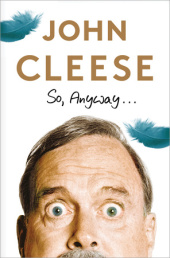 At an age where almost every “celebrity” gets their memoirs out when they have barely reached 25, it is a refreshing to see that John Cleese waited his 75th year to put his ones in writing. People who watched the documentary And Now For Something Rather Similar about the genesis of  the Monty Python reunion shows last year were able to catch glimpses of how Cleese wrote his autobiography while travelling the world doing his stand up show. Instead of a laptop, he travelled the world with a notebook and pencil, using his downtime between performances to put together memories from his life in show business.

The book covers Cleese’s life from his birth to the recording of the first Monty Python Show in 1969. Far from being as comprehensive as Michael Palin’s ongoing diaries series (3 volumes as we speak), the book concentrates on what makes the author “tick”. The first part charts his upbringing in Weston Super Mare being an only child in a age when families with 3 or 4 children were the norm. Despite growing up during the second world and its aftermath, Cleese describes a happy childhood only tainted by memories of his anxious mother. His transition from taking part in the Footlights revues at Cambridge to becoming a professional performer seems lightening fast, one moment he’s rehearsing for the end of year show and the next his touring New Zealand and enjoying what could be qualified as his fist groupie moment. There are some interesting observations on what he considers his shortcomings and his strengths as a comic writer. Rather than having the flamboyance of somebody like Peter Cook, Cleese’s considers his strenghts lay genius is based on clever observation of audience reaction and constant refining of his material plus a great sense of timing.

On a more personal note we get an account of the convoluted courtship of his first wife Connie Booth with whom he wrote Fawlty Towers. His writing relationship with Graham Chapman is also describes at length from their sketches for the Footlights, the Frost Report to their first film script The Rise and Rise of Michael Rimmer. Displaying rather harsh views on his output, he considers that his crowning achievements as a writer are Fawlty Towers and A Fish Called Wanda. The second part of the book is a bit too diluted by extracts from sketches that probably would be better seen on TV performed rather than on a sheet of paper but as he bluntly puts it : “it’s my fucking book”.  The last chapter finishes neatly on the recording of the first Python show but an appendix on  last year’s Python reunion was added at the eleventh hour and although it’s interesting to read Cleese’s impressions, you feel that the jump from 1969 to 2014 is a bit unnecessary (especially as Cleese said there would be a part 2 covering 1969 till now). A good read that leaves you wanting for more.

Further info on John Cleese can be found a his official website: thejohncleese.com and he tweets as: @JohnCleese.

All words by Craig Chaligne. More from Craig can be found at his Louder Than War Author Archive.