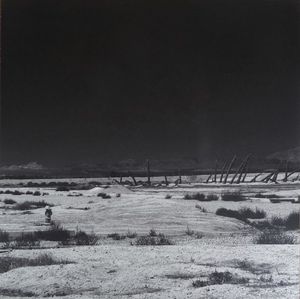 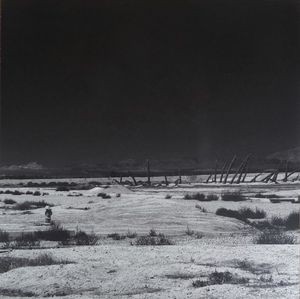 The dynamic duo of Butcher and Robair deliver a knockout synthesis of adventure and improvisation on this vinyl-only outing.

It starts suddenly, with a frantic sawing sound as if some poor bugger trapped in a coffin and armed only with a nail file is trying to saw their way out. Then it is almost silent, before some metallic rattles and whines disturb the muggy closeness. Suddenly a sequence of fast chirrups burst forth. Have we finally broken free into the biosphere?

This is John Butcher and Gino Robair’s fourth recording as a duo – they also play together in several trios and in the seven-piece John Butcher Group – continually expanding a relationship that started in 1997. It’s a vinyl-only release, documenting a live date in Leeds from 2013. It’s also feisty and vital. The pair has an instinctive, almost telepathic relationship gained from their decade and a half (ish) of playing and improvising together and it shows with a performance that, at different points, enables each player to explore their own delicate sound world or combine to form a surging cacophony that is much more than the sum of its parts.

They’re comfortable enough with each other not to stand on ceremony. There’s none of the gentle faffing around that you get on many free improv sessions, that gradual exploration of space and sound that used to signal mutual respect and listening but then became a set of stock gestures. They’re straight into it with gusto, hurtling to the edge of the universe with a dynamic energy.

At points, there’s so much going on that it’s hard to believe there are just two people playing here. Listen out for the bit about five and a half minutes in on the first side, Bottle Heart, when Butcher’s horn starts quacking and squealing as Robair lets rip with sounds that seem more like howls of a pained mammoth than any human instrument.

Towards the end of that first side – at about 10 minutes – we’re treated to a frenetic outburst of scrunching and metallic and scratching from Robair, which is strafed by Butcher’s scrambled gargles. We seem to have dropped down to micro scale, the sounds of an insect village. Soon after, we’re back in the room, with groovy tom rolls and wide open skronky blasts. I like this section in a kind of Cab-Calloway-meets-AMM, but it’s soon dismantled in a cacophony of brassy crashes.

It’s this mystery and drama that helps make the record so enjoyable. Basically, Bottle Breaking Heart Leap is a sax and percussion album whose defining characteristic is that it sounds utterly unlike a sax and percussion album. Even by the standards of free improvisation, which prides itself in subverting those old, rather staid, jazz configurations of duo,  trio and so on, this is an adventurous record, at times resembling a seething cyborg ecosystem made up of many separate yet interdependent parts.

Part of the appeal of this approach is due to Robair’s own aesthetic, often eschewing drums and sticks for a whole variety of what he calls ‘energized surfaces’ – bowing polystyrene plates, using rubber balls to create squishy, fricative sounds, blowing across snare drum heads and so on – a methodology he’s developed painstakingly over years playing with all sorts of experimental and avant-garde musicians. He, like Butcher, has enough in the tank to keep things interesting throughout this 30-minute performance.

This is in particular evidence during the second half of the performance, on what is this record’s second side, Breaking Leap. At about four and half minutes, Robair starts producing a weird rubbery scrape, followed by uneasy squeals which are enough to put your teeth on edge. These sounds return a few minutes later, complemented  by a strained wheezing – a sound familiar to anyone who has ever tried to go a for a jog round their local park after a heavy night on the sauce – before things cut to a lovely purring duet, Butcher’s ruffled tone and a low feedback-like whine from Robair.

After this, it’s full tilt towards the end, with a crazily high-pitched ocarina squeal dissolving into a final, frantic fanfare of chirps and parps accompanied by what sounds like a shortwave radio hiss and whine.

Thrillingly out-there stuff. Get it while it’s hot.

Bottle Breaking Heart Leap is available in a limited edition of 250 on alt.vinyl. You can order it here.