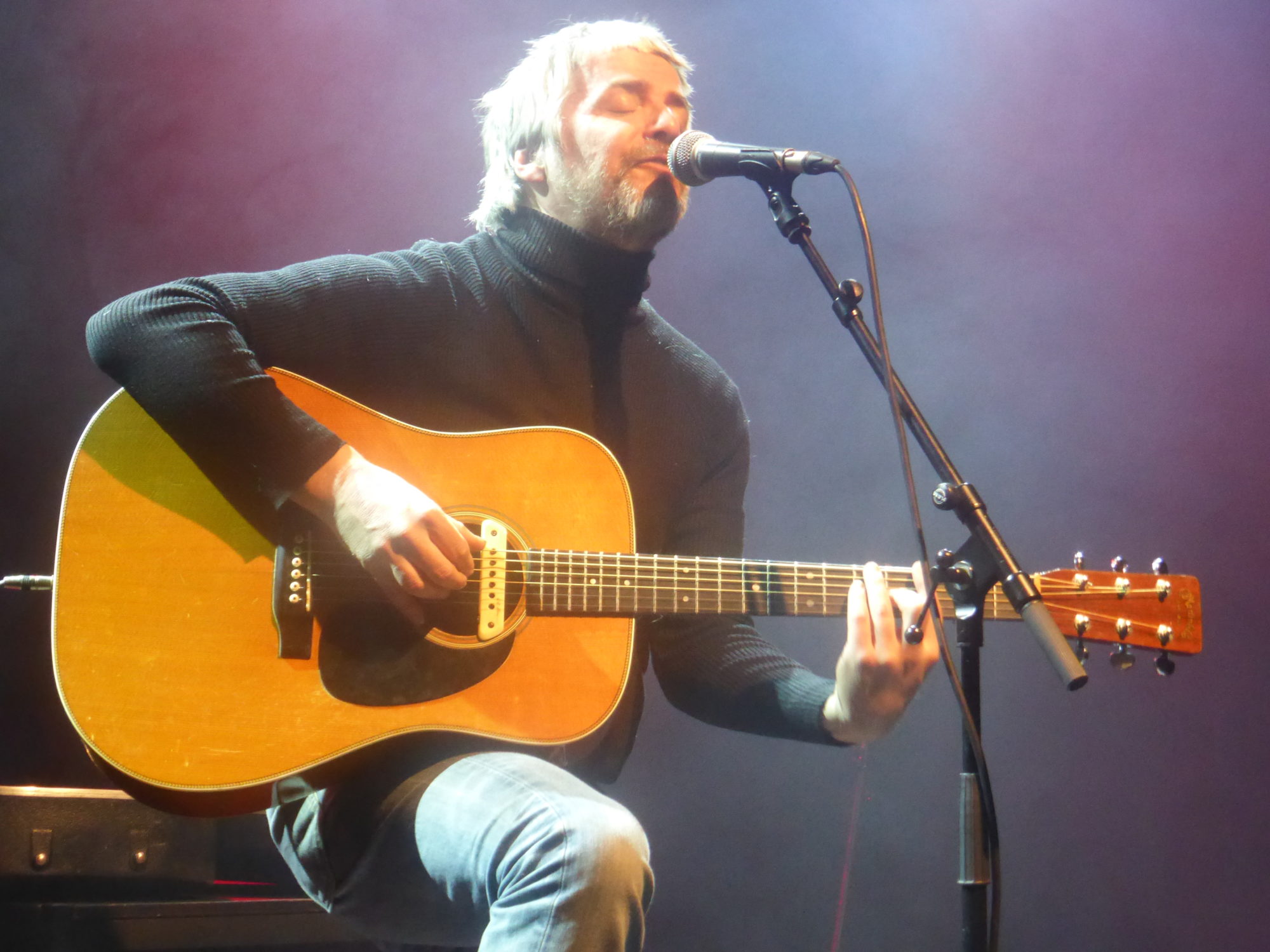 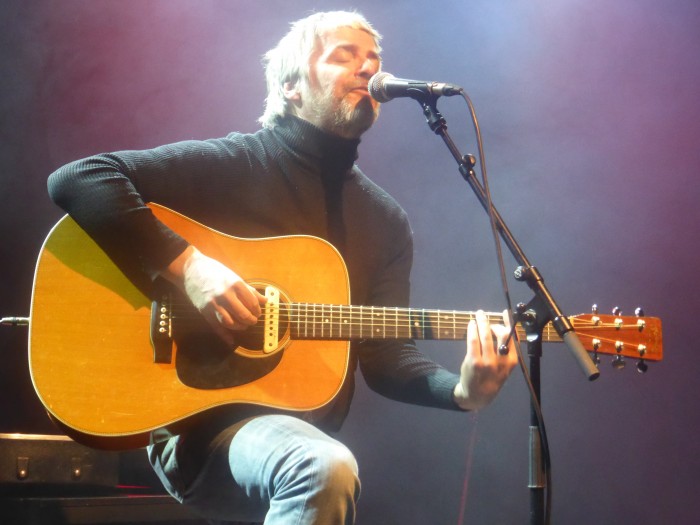 Whilst I Am Kloot have been taking a well-earned break, front man John Bramwell has not lain idle. He’s undertaken a mammoth tour of the UK and Europe over the past eighteen months playing to rapt audiences in venues you wouldn’t usually associate with Mercury-nominated and top ten artists such as Harpenden, Kendal, Selby and Bridport. Tonight, he’s closer to home in the beautiful surroundings of a sold-out Bury Met Theatre supported by one of the North West’s finest up-and-coming singer songwriters Dave Fidler.

Dave Fidler has been building a well-earned reputation on the back of his debut album I’m Not Here. An accomplished guitarist, as he demonstrates on his closing track Tommy which is an instrumental tribute to finger-style genius Tommy Emanuel, he also has the ability to craft songs that tug at the heartstrings. He writes from the heart, about experiences so when you hear him sing Song For Nico dedicated to his daughter and tell her “dragged you out in the open, tiny bones and a fragile frame, from the moment we knew you, reduced us to tears” and promise to always protect her, you want to put your arm around him.  He’s charming too, he stops Easy Gone, Easy Come, which he introduces as about his son Dylan, to tell us that he hasn’t gone hundreds of kidseverywhere and his wife is stood at the side of the stage as well as talking about how he went to Haiti before Christmas as part of a project he’s sponsoring to improve education out there. 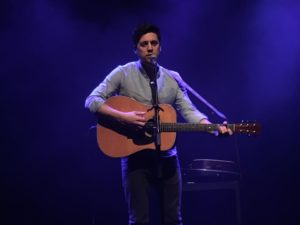 He also plays two new songs from a set of fifteen he’s written for his second album that he hopes to release later this year. Love Listens is a thing of rare beauty and the simplicity of its key line “money talks but love listens” is one of the most poignant and acutely observed views on the way the world works we’ve heard committed to song for a long time. However, it’s the second song Can’t Stand It, which is debuted tonight, that shows that he’s not just going to stand still. It’s got more blues influences than his debut album and a slightly rawer feel to it. He’s a perfect match for John and absolutely worth coming down earlier to at John’s shows to watch.

The room’s full by the time John comes to the stage and it’s immediately clear he’s on top form, telling us “I’ll soon sort that out” when he asks us if we’re in high spirits and later on he tells us “no one likes my gags more than me” but it’s the songs that people have come to listen to, and listen they do, attentively hanging on every word of these dark, twisted stories of drinking and disaster. They come from the decade and a half of I Am Kloot’s masterful back catalogue from the likes of Twist and 86 TVs from their debut Natural History, From Your Favourite Sky and The Same Deep Water As Me from their 2003 self-titled follow-up, the magnificent grace of Astray and I Believe plus Over My Shoulder and the title track from 2005’s Gods And Monsters. The only slight disappointment for us was the lack of anything from what is in my view their career highlight 2008’s Play Moolah Rouge. There’s plenty from 2010’s Sky At Night and 2012’s Let It All In though, the songs stripped back from the shiny production sheen of those albums to their raw bones and sounding better for it. The Met’s crystal clear sound and great acoustics is a perfect setting for this, apparently it’s closing for a refurb, but it’s to be hoped they don’t ruin what it already is.

Mid-set he takes us back to the last century and his guise as Johnny Dangerously around the time the Madchester scene broke in 1989. The Great Escape and Black And Blue might be the work of a much younger and less world-wise man than the one up on stage in front of us, but they show that even back then he was one of the country’s most underrated and undervalued songwriters. To complete the circle, he leaves us with something new from an album he’s in the process of writing to record with a string quartet later in the year. Time’s Arrow is classic Bramwell, sharply observed lyrics with a underlying sense of paranoia and unease set to a melody that could melt the hardest of hearts. 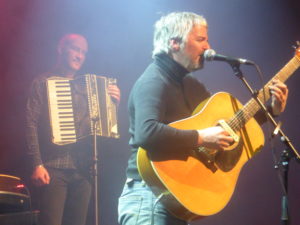 He’s joined by “the divine leader of the known cosmos and a force for good” Alan Lowles on piano and accordian for sections of the set and the piano in particular provides some light and shade to the songs in just the right amounts and in the right places. These songs feel so more much natural in this environment where the contrast between the beauty of the music and the harsh musings of the lyrics is at its most evident. A ripple of piano on Proof, the sense of longing it adds on The Same Deep Water As Me and the ribauld accordian on To The Brink are evidence of how there’s an unspoken musical chemistry between the two.

As ever John’s on fine form, trying to orchestrate an audience singalong during Proof and we all kick in with the wrong piece for which he gently ribs us later, joking he’s playing a new song so that if he forgets it we won’t know and never being able to afraid to take the piss good-heartedly out of himself as well as the hecklers in his audience. He’s easily distracted between songs because unlike those clean cut polished diamonds that record labels throw their millions at, Bramwell is real, there’s no acts, no playing the game or compromise. You never quite know what you’re going to get with him, what mood he’ll turn up in, what songs he’s going to play (neither does he some of the time – another sign of genius) and that makes these acoustic shows some of the most thrilling on edge live music you’re ever likely to witness.

John Bramwell played Mouth On Me, Bullets, Astray, Over My Shoulder, I Believe, No Fear Of Falling, To The Brink, Gods And Monsters, I Still Do, From Your Favourite Sky, 86 TVs, Twist, The Great Escape, Black And Blue, Shoeless, Masquerade, The Same Deep Water As Me, Fingerprints, The Moon Is A Blind Eye, Some Better Day, Northern Skies, Proof and Time’s Arrow.