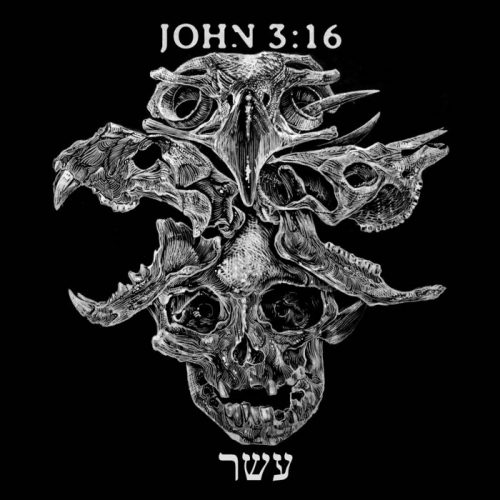 How best to define and present a decade’s worth of music? Well, you could do a lot worse than release an LP like John 3:16’s עשר  (the Hebrew number 10). Celebrating the work Philippe Gerber’s John 3:16 project, the former Heat From A Dead Star man so loved his fans that they gave a 29 track retrospective of superior dark post rock instrumentals. 12 of them can be found on the CD version, which we review here and which isn’t exactly a sprint.

Mindful of the fact that this is a retrospective of 10 years’ standing, what is immediately noticeable is the primordial nature of the music; it certainly doesn’t show any signs of aging or enslavement to past sonic fashions. But then ideas of time aren’t really up for discussion with עשר.This is a monstrous release; containing tracks that plod through an antediluvian landscape like a herd of Brontosaurus on the hunt for fresh vegetation.

These 12 tracks feel like they’re the size of some arctic shelf, or a tundra. The listener’s journey through them is actually very smooth though, throwing up some surprising comparisons. The deep, velvety tones of the guitar breaks in ‘Judith’ have the feel of a Durutti Column track at times, gnostic noodlings that trigger a sort of reflective stasis in the listener. There are also moments of filmic music not that far away from The Flowers of Hell or John Carpenter, albeit heavier. ‘La Fin Absolute Du Monde’ and the opener, the portentous ‘The Sun Shall Be Turned Into Darkness’ are two tracks that could (nay, should) find their way onto the big screen. For its part ‘The Holy Mountain’ has the feel of Gabriel’s work on The Last Temptation of Christ soundtrack, one of the rare tracks where the tempo is kicked up a notch, adding a notable lightness to the Dore-like palette. One can’t really avoid making comparisons with Earth or Carlton Melton at times, too, although these two acts are markedly different in their stylistic approach. It’s more that the same “experience of listening” is to the fore.

Smoothness and reflection is the order of the day, then. Such is the unfazed nature of עשר that this reviewer only really clocked the drumming on track seven, ‘The River of Life’, when the rhythm section really raises its head. Weirdly the bass line and steady thump of the drums reminds this post-punk of Simple Minds’ ‘League of Nations’ but that’s just another odd trick of memory that this LP seems to throw up. But, think on ‘t, reader, track seven! Otherwise we are treated to the odd cymbal crash or sedate tap-along (see ‘Alcyone’, ‘Ten Thousand Times Ten Thousand Angels’, or ‘The White Horse’) or meditative rumble or supportive thump from a kick drum here and there; laid down more as token markers of time than anything more expressive. Though they do add to the overall feeling of timelessness that this record exudes. However the tinny clank in ‘Hexenhammer’ is a key element in the track and (throwing a nebulous literary comparison in the ring) could be the sound of a dwarfish anvil in the Misty Mountains.

A final point to ponder is this is that this is a compilation, something you tend to forget when listening, testament surely to the cohesion of the LP’s music and guiding spirit, and the aplomb of the playing and production. There are enough shifts in pace and texture to leaven what could initially be viewed (given every track is a long, mid-paced post rock instrumental drenched in guitar effects and reflective in tone) as a bit of a slog. It’s far from a slog though, rather it’s a very giving listen. And when the last track, the mediaeval plod known as ‘The Black Hollow rolls around’, you feel mildly exalted, quietly moved.