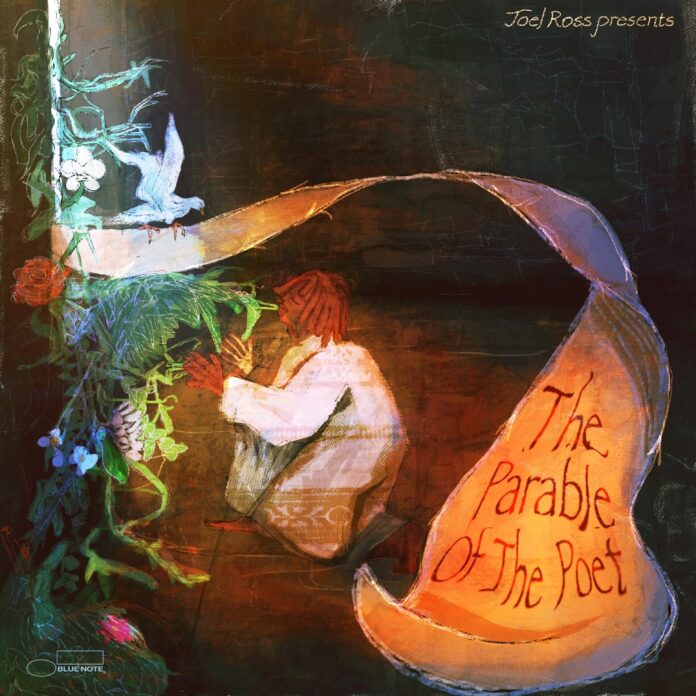 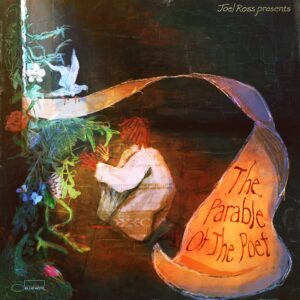 Joel Ross: The Parable Of The Poet

The Parable Of The Poet, the third album by New York-based vibraphonist Joel Ross, is an absolute triumph. Supported by a stellar band, he has created an album that feels both voluminous and intimate at the same time. Gordon Rutherford reviews for Louder Than War.

Whoever draws up the schedule at Blue Note clearly decided that Good Friday needed a bit more va-va-voom to live up to its moniker, because that’s the day they have pencilled in for the release of this phenomenal collection. The Parable Of The Poet is New York-based vibraphonist and composer Joel Ross’ third release on that iconic label and it is also happens to be his most accomplished to date. Playing a significant role in that achievement is Ross’ eight-piece Parables band, which includes such luminaries as Blue Note label-mate Immanuel Wilkins on alto and Marquis Hill on trumpet. As we will learn, Ross has recruited quite the ensemble.

Critically, whilst it is Ross’ name on the sleeve, this is categorically an all-band album. Those collaborators dazzle, both individually and collectively, although credit must go to Ross for sharing the spotlight and leading the band in such an effective way. It probably helps that he describes them as “more than just the instruments/they’re all my friends”. Furthermore, according to Ross, each and every one of his Parables band “committed themselves to the vision”. You can tell. That vision is expressed across seven movements, each one a story in itself, with the band given ample scope to interpret the melodies accordingly.

Therefore, whilst Ross is unquestionably the bandleader, The Parable Of The Poet is the work of a collective. Fittingly, however, it is Ross who leads us into this experience, with his vibraphone the only sound that is heard in the first minute of the album’s first movement, the mellow and melodic Prayer. It resonates and chimes delightfully before being joined by the other musicians. Respectfully, conscientiously, they enter the room gradually, easing into the track. There’s no fanfare. They allow Ross’s vibraphone to guide them in, comfortable in the knowledge that they will all get their opportunity to shine before long.

Bassist Rick Rosato steps up to introduce the second movement, Guilt; his upright bass reverberating quite magnificently. The most striking aspect here is the space in which it is allowed to blossom. Ross and the Parables are patient. For a full ninety seconds they hold fire, before Ross comes scurrying in, his vibraphone swooping like pipistrelle at dusk. Sean Mason’s piano enters the room and, once again, just like the opening movement, nothing is rushed. Everything is in the right place, at precisely the right time. Gabrielle Garo’s flute dances whilst, just like guilt itself, those horns smoulder reflectively. The movement is entitled Guilt for a reason. As the music progresses, it sways and sashays rhythmically; picking up tempo, but not urgency.

Choices, the third movement, opens with the dark and brooding tenor sax of Maria Grand. There is palpable tension as the other instruments creep in to the piece, as though they are circling each other, spoiling for a fight. Midway through, it is becalmed, as it takes on the hue of a New Orleans funeral, thanks largely to the atmospheric trombone of Kalia Vandever. Then it’s off again, veering in a different direction. Those instruments are no longer at war. It’s as though a shaft of sunlight has broken through to shine directly on to them as they find common ground and communicate with each other constructively. However, it’s more complex than the composition moving from something dark into a brighter arena. Even within the phases of this movement, there is perfect counterpoint and contrast. Once again, we are struck by the significance of the title of the movement. Choices. Light and shade. Ross has created absolute chiaroscuro.

Ultimately, the titles tell us everything. Sometimes we have to listen closely and apply our own interpretation to get there. Sometimes it’s obvious. The fourth movement, Wail, falls into the latter category. It literally opens with, well, a wail. Immanuel Wilkins’ alto sax takes us on this particular journey. He explodes out of the speakers in a way that is reminiscent of Coltrane’s opening to Resolution. It has that same kind of immediacy and impact, wailing magnificently and emotionally. When the other instruments join, there is a sense of mystery and intrigue, with Ross’ vibraphone bringing a hint of Morricone. As Wail unfolds, it becomes increasingly chaotic, with Ross darting all over that vibraphone, seemingly at odds with Wilkins’ direction. It is chaotic, yet somehow precision is maintained. That is largely due to the super-tight drumming of Craig Weinrib, subtly underpinning everything. The music is like balls of wool with Weinrib acting as the knitting needles, stitching it all together. When the Parables recognise that it is time to close the piece down, they do so elegantly. Everything slows gracefully and the movement is ushered out by Mason’s intricately picked piano and the mournful, glorious trumpet of Marquis Hill. The calm after the storm. Wail is an absolute triumph.

Seamlessly, it segues into The Impetus (To Be And Do Better). Mason and Hill simply pick up where they left us on Wail. It is melancholic and moody, arguably the most straightforward of these seven movements. However, it is no less beautiful for that. Doxology (Hope) returns us to unconventionality, with Grand’s tenor laying down a scurrying introduction. When the whole band join, it is heavenly and if you haven’t yet appreciated quite how tight they are yet, you will by now. Surely, this has to be a consequence of their friendship and one of the most marvellous things about this movement is the way they allow each other to briefly step into the spotlight and solo.

The final movement, Benediction, is perfectly scheduled. Mason’s late night, contemplative piano is the textbook introduction to an album closer. The tempo is akin to a funeral march, but not a New Orleans one this time. Ross’ vibraphone brings the melody, atop sombre percussion. Benediction has a considerably slower, more soulful, pace, almost as though it is encouraging us to take some time to reflect on what has come before.

And reflect we should, because The Parable Of The Poet is a remarkable album, one like no other album I have heard this year. It has an uncanny ability to feel voluminous yet simultaneously intimate. Each and every movement is outstanding in its own right and together they dovetail perfectly. Just like the band, in fact. Here, we have a collection of nine musicians, all of whom are exceptionally talented individually. But, like any great team, the whole is greater than the sum of the parts. That collective brilliance is testament to Ross’ genius in understanding group dynamics. It’s going to be a very good Good Friday in 2022.