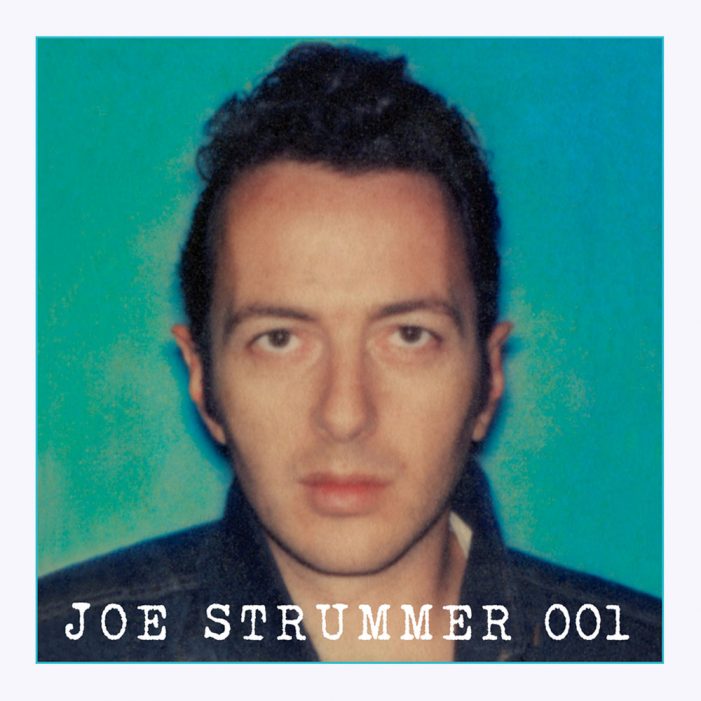 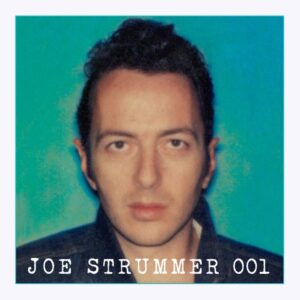 The first compilation of Joe Strummer’s material pre and post-dating The Clash. From the 101er’s through to The Mescalero’s and everything in between. This retrospective spans 28 years and showcases the depth and breadth of Strummer’s music providing the casual fan with an eclectic range of his output over his career, while the addition of a disc of unreleased material makes this release a must have for Strummer aficionados.

Joe Strummer. Who was he? Certainly a character who divided opinion. A hero to many, he has been revered and admired over the years, while others have described him in less than complimentary terms. There are those who can hear no wrong said about him and others who don’t have much good to say. Take Johnny Rotten, who has been quoted as saying he liked him as a person but didn’t have much good to say about his ideologies and slammed him for being a hypocrite.

The son of a diplomat, a folkie (nicknamed Woody after protest singer and early proponent of punk ideals, Woody Guthrie), Strummer dropped out of art-college, turned singer in a pub rock band before ultimately finding his place and turning to punk.

Punk rock warlord is among the titles given to him by some. Anyone coming to this compilation expecting a selection of tunes with what would be described as having 70’s punk stylings has missed the point of 90% of Strummer’s solo input (and a large percentage of The Clash too). I could argue Joe’s punk credentials, but the punk police debates about what is/isn’t punk and having uniform ideas of what punk should be are strange, laughable and ultimately pointless.

I’ll happily to take the lead from filmmaker and Clash collaborator Don Letts, it was all about attitude, which Strummer had aplenty, influenced by personal his ideologies and beliefs, sometimes misguided, in turn influencing his song writing.

“Punk rock isn’t something you grow out of Punk rock is an attitude, and the essence of that attitude is ‘give us some truth’” – Joe Strummer

Often described by fans as “The Only Band That Matters” the attraction of The Clash is still apparent through the many Facebook groups/sites and tribute bands dedicated to the music & style of the band. Personally, I thought they were more than just a punk band. They didn’t stand still, they constantly evolved and innovated, in the end imploding but only after having provided some classic moments in music over the years.

Strummer continued to build and develop as a performer after The Clash.

Essentially, as a person, Strummer was a flawed character, but probably more human and relatable for that. None of us is perfect, no-one should be worshipped on a pedestal as an unblemished example of humanity. He was a philanderer. He made many decisions based on heart rather than head, on occasion to his own detriment. However, ultimately, his decisions came from a place of perceived positivity and he believed in humanity and fighting for a cause. This was ostensible through the songs he sang and the subject matter he tackled over the years. Strummer spent the latter years of his career and life enjoying his music, sitting around festival camp fires, enjoying camaraderie and conversation with family, friends and fans alike, while still fighting for the causes that meant something to him. One of his final gigs was a fundraiser for the Fire Brigade Union. 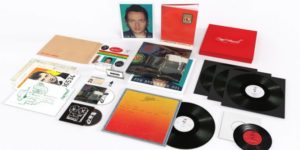 And so to his music.

Just as The Clash were more than just a punk band, Strummer’s music from his solo career covered a catholic range of influences and styles. Rock ‘n’ Roll to Folk, Country to African beats and World music, Jazz to Reggae and Afro-Cuban-Be-Bop……often several inspirations mashed and clashed within one song.

The tracks on the first disc will be familiar to hard-core fans of Strummer, and represent the array of projects he was involved in over the years pre and post Clash, including tracks from his wilderness years where success evaded him (although it doesn’t document his time with The Pogues. Live tracks featuring Strummer have been released on previous Pogues releases.)

Things get off to an upbeat start in traditional bluesy rock ‘n’ roll style demonstrating the primal energy of the pre-Clash days of the 101’ers with the self-explanatory Letsagetabitarockin’ & single Keys to Your Heart.

The first disc of this compilation features a lot of Strummer’s soundtrack work, firstly featuring the thumping beat of Love Kills from Sid and Nancy, and the western style banjo/harmonica combination that is Tennessee Rain from the Walker soundtrack. Also present is the clanging clatter of Trash City from Permanent Record representing his incarnation with the Latino Rockabilly War. More film music in Burning Lights & Afro-Cuban be-Bop (credited as The Astro-Physicians) from the soundtrack of Finnish film I Hired a Contract Killer.

Alongside the reggae feel of Ride Your Donkey, 15th Brigade represents Earthquake Weather solo-period Strummer, the flamenco guitar infused cover of the traditional Spanish Civil War song “Viva La Quince Brigada” having appeared on the b-side of the Island Hopping 7”.

Sandpaper Blues (credited as RaDaR) from the compilation album companion to the exhibition of the same name is one of a few tracks here from compilation albums (though Sandpaper Blues did also appear later on Rock Art & the X-Ray Style.) The other tracks from compilations are Generations, the title track of human rights album Generations 1 (A punk look at human rights) which featured Joe in another side project Electric Dog House (including Rat Scabies and Seggs from The Damned and Ruts fame) and It’s A Rockin’ World from the soundtrack of satirical and often close to the bone adult cartoon South Park.

The epic Yalla Yalla and X-Ray Style represent a range of cultural influences in both lyrics and musical styles, while the appeal of world music and influences continued on Global a Go-Go with the hauntingly atmospheric and affecting Minstrel Boy (also featured on the Black Hawk Down OST) and Johnny Appleseed, bringing the legendary story of John Chapman and his planting of apple trees and care for insects right up to date

“Emancipate yourself from mental slavery, none but ourselves can free our minds”

The song also lent its name to the eminently readable biography of Strummer by Chris Salewicz.

The other duet is Over the Border with Harder They Come reggae mega-star Jimmy Cliff from Cliff’s 2002 album Fantastic Plastic People.

Coma Girl and Silver & Gold are the last two tracks on the first disc and induce a particular sentiment and resonance being, as they are, from the posthumously released Streetcore album released in 2003 after his untimely death in December 2002 at the premature age of 50.

Like any compilation this selection will please some and disappoint others, having missed out their particularly cherished Strummer song. However, this is a widely representative and striking document of his diverse solo work, a comprehensive snapshot of his various guises over the years.

Disc two is the one that will create the most interest amongst long term Clash and Strummer fans containing, as it does, alternative versions of some of his songs and others that have, until now, been unreleased.

Kicking off with the same song as disc one, this time though a cassette demo of Letsagetabitarockin’ which is far lower key and understated than the version eventually released.

Czechoslovak Song/Where is England is an early version of the song that eventually became This is England. The track has a Straight to Hell feel about it, featuring Paul Simonon on bass. Listening to the lyrics, it is strangely prescient and could have been written in the wake of the Brexit vote.

Joe was interested in humanity and it was not the only time he wrote socially conscious songs highlighting immigration issues, take Shaktar Donetsk from the universally aware album Global a Go Go.

Two very different versions of Pouring Rain appear on this disc, the first, recorded with the same personnel as Czechoslovak Song, while the second version is from 1993 film When Pigs Fly turns the song from a rock track into an accordion, flute, whistle and bodhran infused folk song that could have been recorded by The Waterboys. When Pigs Fly, with its jazz saxophone inflections, perhaps obviously, appears from the same film. While Rose of Erin, adds slide guitar to the folky mix in the track recently unveiled in advance of the album, is an unreleased track from songs recorded for the film.

Unreleased film score tracks also feature from 1986’s Sid and Nancy, Crying on 23rd (The Soothsayers) is out and out blues while 2 Bullets, with vocal by Pearl Harbour, is country both in sense of the music, complete with crying steel guitar, and in the theme of the jilted lover.

“I got two bullets in a gun, one shot for him, one for his woman”

Blues on the River is from 1984 and a demo of Joe with a drum machine, possibly planned for The Clash MkII, while The Cool Impossible is a Strummer demo from 1993 and wouldn’t sound out of place in a late night jazz club with breathy vocal, piano and brushed drums.

London is Burning, one of the last songs Joe wrote, is an unreleased song which in the end was reworked as Burning Streets for Streetcore, the track was originally named Fire Fighting Street, written for his benefit show for the Fire Brigade Union in Acton Town Hall in November 2002, one of his last live appearances. This was the last song found for “001” and was made available on the announcement of the release of this compilation.

Final track is US North, an unused song from the Robert Frank and Rudy Wurlitzer film ‘Candy Mountain’. Written by Strummer, the song tellingly features Mick Jones, Dan Donovan and Leo Williams with the undeniable sound of Big Audio Dynamite coming through. The track was played live by them in 1987.

Strummer once said without people you’re nothing, without Strummer we wouldn’t have this diverse anthology of his music to savour and love.